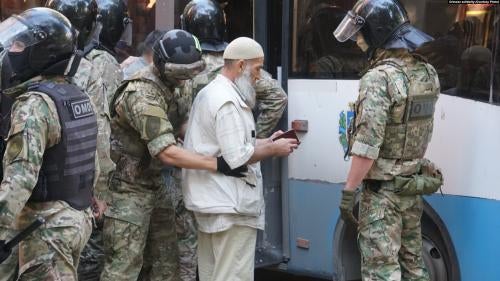 The armed conflict in the Donbas region of eastern Ukraine continued to pose a grave threat to civilian safety and impede access to food, adequate housing, and schools. Covid-19 pandemic-related travel restrictions, introduced by Russia-backed armed groups and the government, blocked access to health care and pensions and worsened hardships for the already impoverished population of the conflict-affected Donbas.

Armed groups forcibly disappeared, tortured, and arbitrarily detained civilians and repeatedly denied some of them access to urgent medical care.

A spike in hostilities, despite the ceasefire, led to civilian casualties. According to United Nations human rights monitoring mission reports, in the first six months of 2021, 56 civilians were killed or injured by shelling, small arms weapons fire, mine-related incidents, and unmanned aerial vehicles (UAV) strikes.

Russia-backed armed groups in Donetska and Luhanska regions continued to torture, arbitrarily detain, and forcibly disappear civilians and to deny them access to medical care. As of July, an estimated 300-400 conflict-related detainees were being held by these armed groups.

There were no reports of prolonged arbitrary detention by the Ukrainian authorities in 2021. The investigation into alleged grave abuses in unofficial detention facilities by Ukraine’s secret services in 2016 remained open and has borne no results.

Excessive and arbitrary restrictions imposed by armed groups in Donestska and Luhanska regions continue to unduly burden civilians. The Ukrainian government ended most Covid-19-related restrictions in June. In welcome moves, in August the authorities temporarily suspended the requirement for pensioners residing in nongovernment- controlled areas to regularly confirm displaced person registration and in September, announced plans to introduce remote identity verification. If enacted, the latter step would help address discrimination against pensioners residing in nongovernment-controlled areas, in particular helping to eliminate barriers that pensioners who cannot travel due to limited mobility have faced accessing their pensions since 2014.

Lack of access to quality health care remained a key concern for conflict-affected parts of eastern Ukraine, where approximately 1.3 million people continued to face difficulties in accessing essential health services. Women have been disproportionately impacted, due in part to limited options for maternal and other sexual and reproductive healthcare in these regions, the poor quality of these services, and traditional gender roles that leave women with little time and few resources to prioritize and address their own health.

Rule of Law, Administration of Justice

In October 2020, the Constitutional Court of Ukraine stripped the national anti-corruption agency of its essential powers, effectively dismantling the system of publicly accessible asset declarations. The ruling was followed by President Zelensky’s bill to terminate the Constitutional Court’s powers. Zelensky withdrew the bill in January.

The trial of four defendants over the 2014 downing of Malaysia Airlines flight MH17 advanced to evidentiary hearings.

The criminal case involving the 2014 abduction and torture of two Maidan protestors, which resulted in the death of one of them progressed in April, with two men arrested and charged. Also in April, a district court sentenced a leader of the responsible group to nine years in prison. The group, known as “titushky”  consisted of anti-Maidan activists recruited by law enforcement to attack protesters during Maidan protests. In December 2020, the State Bureau of Investigations indicted a Maidan activist on homicide charges in connection with the February 2014 arson of the Party of Regions office.

There has been no further progress in investigations and trials related to the 2014 Odesa clashes.

A January European Court of Human Rights decision found that the Ukrainian government committed multiple breaches of the European Convention on Human Rights in the course of public order operations during the Maidan protests, including the right to life, the prohibition of torture, and the right to liberty and security.

In May, parliament adopted a long overdue law aligning Ukraine’s national legislation with international law to allow for effective domestic prosecutions of grave international crimes, including those committed in Donbas and Crimea. At time of writing, because Zelensky has not signed the law, it has not gone into effect. Additional changes are likely to be needed to the Criminal Procedural Code to support effective investigations and prosecutions.

Physical attacks and online threats against human rights defenders, anti-corruption activists, environmental activists, and independent journalists have been numerous while investigations into the incidents have been slow, and at times ineffective. As of September, the Institute of Mass information, a watchdog group, recorded 73 cases of obstruction of journalists’ professional activities, 17 beatings, 12 threats, and 11 restrictions on access to information.

The investigation into the 2018 killing of activist Kateryna Handziuk has led to prison sentences for five men. However, progress in efforts to charge those allegedly responsible for ordering the attack has been slow.

A February decree by Zelensky led to the extrajudicial banning of three pro-Russia television channels and threatened media pluralism in Ukraine. The decree was based on a law that grants the government authority to sanction foreign individuals and entities that it deems have engaged in activities which could threaten Ukraine’s national interests, national security, sovereignty, and territorial integrity.

In the first half of 2021, civil society groups reported a sharp increase in attacks against LGBT, anti-corruption, and women’s rights activists, including by far-right groups and individuals.

In May, parliamentary committees began discussing a bill that would increase liability for discrimination and intolerance. In April, the Health Ministry lifted restrictions against gay people on donating blood.

In May, LGBT activists held a pride march in Kyiv in support of transgender people, under police protection. Far-right activists organized a counter protest but did not attack the march.

The police prevented attempted attacks on pride marches in Odesa and Kharkiv, held in August and September. In Odesa, the police arrested over 50 people who tried to attack the pride participants. Twenty-nine officers were injured during the clashes.

In March, members of a far-right group assaulted six participants of the Women’s Rights march in Kyiv. Four men have been arrested.

Also in May, far-right radicals in Kyiv sprayed teargas at the screening of a film about Ukraine’s LGBT community. Twenty people received minor eye burns.

The LGBT Association LIGA faced threats, online bullying, and attacks in Odesa and Mykolaiv. In May, masked men threw stones at the building of the LIGA’s office in Odesa, damaging it.

Roma people remained a target of online hate speech and occasional physical violence. In April, local media published a video from the meeting of the Ivano-Frankivsk mayor with local police, where he ordered them to “move Roma people back to Zakarpattya.”

No progress has been made in ensuring accountability for the 2017 murder of Mykola Kaspitsky, the leader of Roma community in Kharkiv region. In January the case was closed for the fourth time. Throughout the year, activists raised concerns over the police allegedly sabotaging the case.

In January. police broke up two protests against far-right groups, under the pretext of Covid-19 restrictions, while other protests were allowed to go on unrestricted.

In June, Ukraine repatriated a mother and her seven children held in dire conditions in a camp for Islamic State (ISIS) suspects and family members in northeast Syria. The authorities had repatriated two other Ukrainian women and seven children in 2020.

Russian authorities in Crimea continued to persecute Crimean Tatars, including by conflating religious or political beliefs as affiliation with Hizb ut-Tahrir, banned in Russia as a “terrorist” organization but legal in Ukraine. Dozens of Crimean Tatars continued to serve prison sentences on arbitrary charges for real or perceived affiliation with the organization—many of them members of the Crimean Solidarity, a group that supports Crimean Tatars arrested on politically motivated grounds. In February and August, a total of 11 men were arrested on similarly spurious claims.

In September, authorities arrested Nariman Dzhelyal, one of the few Crimean Tatar leaders remaining in Crimea, on trumped-up charges of “aiding sabotage.” Authorities detained four other Crimean Tatars in connection with the case.

A new wave of house searches in March led to the detention of four men and one woman who are Jehovah’s Witnesses, which is banned as “extremist” in Russia. In March, a court sentenced Viktor Stashivskyi to six-and-a-half years in prison for “organizing the activities of an extremist organization,” the longest sentence yet given to a Jehovah’s Witness.

Russian authorities continued to conscript males in occupied Crimea to serve in Russia’s armed forces, in violation of international humanitarian law. Conscription was carried out in tandem with enlistment advertising campaigns in Crimea and military propaganda for schoolchildren.

In January, the European Court of Human Rights found a Ukrainian inter-state complaint against Russia to be partially admissible. The court recognized that Russia had “exercised effective control” over Crimea since 2014, paving the way for accountability for violations of the European Convention on Human Rights by Russia during its occupation of the peninsula.

In April, the European Union issued a statement formally accusing Russian authorities in Crimea of conducting a conscription campaign, labelling it a “violation of international humanitarian law.”  The EU also condemned in September the detention of Crimean Tatar leaders and called for the release of Ukrainian citizens detained in Crimea.

In May, during their annual human rights dialogue, the European Union welcomed the adoption of Ukraine’s recent National Strategy for Human Rights and the Action Plan, while also calling for further progress in reform of multiple sectors and successful resolution of the Maidan and Odesa investigations. During the EU-Ukraine Summit in October, both parties reaffirmed their commitment to strengthening the political and economic integration of Ukraine with the EU without a particular emphasis on human rights and the rule of law issues.

During their first meeting at the White House in August, US President Joseph Biden and President Zelensky committed to upholding human rights in Ukraine, including in such areas as reforming the judiciary, combatting corruption and fighting discrimination against the LGBT community. The presidents committed to holding Russia accountable for abuses in the territories of Ukraine controlled or occupied by Russia and to seeking the release of political prisoners held there.

A July report from the UN Human Rights Monitoring Mission in Ukraine condemned arbitrary detention and torture by both the Ukrainian government and non-government armed groups throughout the conflict in eastern Ukraine.

The government failed to submit the Council of Europe Convention on the Prevention of Violence against Women and Domestic Violence (the Istanbul Convention) to parliament for ratification. Ukraine signed the convention in 2011 and has repeatedly committed to ratification.

No public steps were taken to move toward a formal investigation following the December 2020 announcement by the Office of the Prosecutor at the International Criminal Court that the situation in Ukraine merited ICC action.