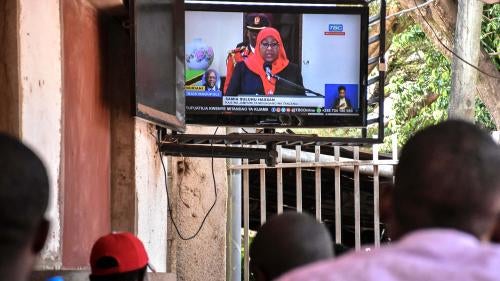 President Hassan took measures to respond to some rights concerns, but the government continued to restrict media and civic space, arbitrarily arrest journalists and critics of the government, enforce a discriminatory ban on pregnant students in schools, and undermine the rights of women and children. The authorities have not conducted meaningful investigations into serious abuses that marred the 2020 elections. Tanzania’s Sexual Offenses Special Provisions Act of 1998 continues to punish consensual adult same-sex conduct by up to life imprisonment.

Although President Hassan pledged to remove existing restrictions on the media on April 6, authorities continued the Magufuli administration’s crackdown on the media.

The media and human rights groups reported that on April 12, police arrested journalists Dickson Billikwija and Christopher James, detaining them for three hours within the premises of Temeke municipal government on the orders of the Temeke district executive director.

On April 21, 2021, three security officers with the Kikosi cha Valantia Zanzibar (KVZ), an armed paramilitary group controlled by Zanzibar’s government, assaulted Jesse Mikofu, a reporter with the privately owned Mwananchi newspaper, after he photographed them forcibly evicting market traders from the Darajani area of Stone Town.

On August 11, 2021, the government suspended Uhuru, a newspaper owned by the ruling party, Chama Cha Mapinduzi (CCM), for publishing a story suggesting that President Hassan may not contest the 2025 presidential elections, the first newspaper suspension under President Hassan.

On September 5, 2021, the Ministry of Information, Culture, Arts and Sports suspended the privately owned Raia Mwema newspaper for 30 days for "repeatedly publishing false information and deliberate incitement." The paper had published an article linking a gunman who had shot and killed four people outside the French Embassy to the CCM party.

On April 21, Justice and Constitutional Affairs Minister Palamagamba Kabudi told Parliament that the Law Reform Commission was doing the groundwork for review of the Economic and Organized Crime (Control) Act, which provides for non-bailable offenses, including money-laundering, which the government has in the past used to detain government critics and journalists.

The authorities have started the process of amending the online content and the radio and television broadcasting content regulations of the Electronic and Postal Communications Act. The current regulations give the Tanzania Communications Regulatory Authority (TCRA) wide discretionary powers to license blogs, websites, and other online content, and prohibit radio and television broadcasters from working with foreign broadcasters unless staff from the communications authority or other government department are physically present.

On January 5, a court in Dar es Salaam ordered the release of human rights activist Tito Magoti and information technology professional Theodory Gyan from prison after paying a fine of Sh17.3 million (US$7,500). Magoti and Gyan had spent two years in detention on economic crimes charges, including money laundering and leading organized crime. On December 20, 2019, police arrested Magoti after luring him to “a meeting” through text messages from Giyani, his acquaintance.

On June 22, the High Court overturned the September 2020 decision of the Tanganyika Law Society to suspend human rights lawyer and government critic Fatma Karume from practicing law on mainland Tanzania. Karume’s suspension was in response to allegations of misconduct after she challenged President Magufuli’s appointment of the attorney general of Tanzania.

On July 21, police in Mwanza, northern Tanzania, surrounded the hotel occupied by members of the country’s main opposition party, Chadema, and arrested 11 party members, including the party chairman, Freeman Mbowe, ahead of a conference to discuss reforms to the country’s constitution. The day before the scheduled meeting, authorities in Mwanza announced a ban on “unnecessary gatherings,” ostensibly to prevent the spread of Covid-19. The authorities later charged Mbowe with economic sabotage, conspiracy, and financing terrorist activities and placed him in pretrial custody.

In 2012, the government embarked on a review of the constitution, but the process stalled in 2015 after President Magufuli took office and made it clear the review was not a priority for his administration, saying his government would instead pursue development projects. On June 29, President Hassan continued this policy, informing the media that before the country embarks on a constitutional reform process, she should first be allowed to fix the economy.

In July, the United Nations refugee agency (UNHCR) and the African Commission on Human and Peoples’ Rights expressed concern with Tanzania’s forced returns of over 9,700 Mozambican asylum seekers at the Negomano border point between January and June, without an assessment of their international protection needs. Many were fleeing armed conflict and insecurity in the coastal city of Palma, following a brutal attack by non-state armed groups in March 2021. The pushbacks violated the principle of non-refoulement under international standards and regional refugee law.

On August 23, at a ceremony hosting the Tanzania men’s football team, the president made remarks that cast aspersions on the “femininity” and gender of Tanzanian women footballers, which was widely condemned by activists.

On November 24, 2021, Tanzania’s Ministry of Education lifted a ban that explicitly barred students who are adolescent mothers from attending public schools.

In June 2017, Magufuli officially declared a ban on pregnant students and adolescent mothers attending school. Pursuant to its agreement with the World Bank, tied to a $500 million loan for the government’s Secondary Education Quality Improvement Program, the Tanzanian government announced that it would allow students who were pregnant or were mothers to enroll in a parallel accelerated education program, described as “alternative education pathways.” However, these centers are often not accessible because of the long distances students must travel to reach them and because they charge fees, unlike public primary and secondary schools that are tuition-free.

At time of writing, the government had not outlawed child marriage, meaning the authorities had not complied with a 2016 High Court decision to amend the Marriage Act to raise the legal age of marriage to 18 years for girls and boys.