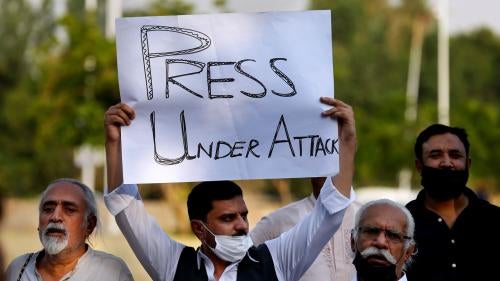 In 2021, the Pakistan government intensified its efforts to control the media and curtail dissent. Authorities harassed, and at times detained, journalists and other members of civil society for criticizing government officials and policies. Violent attacks on members of the media also continued.

The authorities expanded their use of draconian sedition and counterterrorism laws to stifle dissent, and strictly regulated civil society groups critical of government actions or policies. Authorities also cracked down on members and supporters of opposition political parties.

Women, religious minorities, and transgender people continue to face violence, discrimination, and persecution, with authorities failing to provide adequate protection or hold perpetrators to account. The government continues to do little to hold law enforcement agencies accountable for torture and other serious abuses.

A climate of fear impedes media coverage of abuses by both government security forces and militant groups. Journalists who face threats and attacks have increasingly resorted to self-censorship. Media outlets have come under pressure from authorities not to criticize government institutions or the judiciary. In several cases in 2021, government regulatory agencies blocked cable operators and television channels that had aired critical programs.

Several journalists suffered violent attacks in 2021. On April 20, an unidentified assailant shot and wounded Absar Alam, a television journalist, outside his house in Islamabad. Alam has been a prominent critic of the government. On May 25, Asad Ali Toor, a journalist, was assaulted by three unidentified men who forcibly entered his apartment in Islamabad, bound and gagged him and severely beat him. Toor said that they identified themselves as being from a security agency, interrogated him about the “source of his funds,” and took away his cell phone and other electronic devices. The government ordered an investigation into the incident, but no findings were made public. On May 29, the news channel, Geo, “suspended” Hamid Mir, one of Pakistan’s best-known television talk show hosts, after he spoke at a protest in solidarity with Toor.

Nongovernmental organizations (NGOs) reported intimidation, harassment, and surveillance of various by government authorities. The government used the “Regulation of INGOs in Pakistan” policy to impede the registration and functioning of international humanitarian and human rights groups.

Members of the Ahmadiyya religious community continue to be a major target for prosecutions under blasphemy laws as well as specific anti-Ahmadi laws. Militant groups and the Islamist political party Tehreek-e-Labbaik (TLP) accuse Ahmadis of “posing as Muslims.” The Pakistan penal code also treats “posing as Muslims” as a criminal offense.

According to a Pakistani human rights organization, the Centre for Social Justice, at least 1,855 people were charged under Pakistan’s blasphemy laws between 1987 and February 2021.

On May 17, dozens of people attacked a police station in Islamabad to lynch two brothers charged with blasphemy, breaking into the facility and battling with police officers before the station was brought under control. The two brothers were physically unharmed. The police arrested a number of individuals who were part of the mob, but none were prosecuted.

On June 4, the Lahore High Court acquitted a Christian couple, Shafqat Emmanuel and Shagufta Kausar, of blasphemy after spending seven years on death row. The couple was convicted in 2014 of sending “blasphemous” texts to a mosque cleric.

In August, an 8-year-old Hindu boy in Rahim Yar Khan, Punjab, became the youngest person to ever be charged with blasphemy in Pakistan after he was accused of defiling a carpet at a religious seminary. Following his release on bail, a mob attacked a Hindu temple, causing damage. All charges against the child were subsequently dropped.

Abuses against Women and Girls

In July, the torture and murder of Noor Muqadam, 27, in Islamabad led to nationwide protests. A childhood friend of Muqadam, Zahir Jaffer, whose marriage proposal she had spurned, was arrested and charged with the murder. Earlier in July, Pakistan's Parliament did not pass a bill that sought to criminalize domestic violence; women rights activists criticized the government’s decision to refer the bill to the Council of Islamic Ideology (CII) for review. The CII criticized the bill saying that it contained “un-Islamic injunctions” and would destroy the institution of the family.

In August, a viral video of a young woman being assaulted by more than 400 men in a Lahore park while she and her companions were filming a TikTok video led to domestic and international condemnation. The government vowed to find the perpetrators, but no arrests were made public.

Child marriage remains a serious problem in Pakistan, with 18 percent of girls marrying before age 18, and 4 percent marrying before 15. Women from religious minority communities remain particularly vulnerable to forced marriage. The government has done little to stop such marriages.

Pakistan ranked 153 out of 156 nations on the Global Gender Gap 2021 index issued by the World Economic Forum.

Even before the Covid-19 pandemic, over 5 million primary school-age children in Pakistan were out of school, most of them girls. Human Rights Watch research found girls miss school for reasons including lack of schools, costs associated with studying, child marriage, harmful child labor, and gender discrimination. School closures to protect against the spread of Covid-19 affected almost 45 million students for most of the year; Pakistan’s poor internet connectivity hampered online learning.

The Tehrik-Taliban Pakistan (TTP), Al-Qaeda, Balochistan Liberation Army (BLA), and their affiliates carried out suicide bombings and other indiscriminate attacks against security personnel that caused hundreds of civilian deaths and injuries during the year. In July, an attack on a bus carrying workers at the Dasu Hydroelectric project in Khyber-Pakhtunkhwa killed nine Chinese engineers. In August, a grenade attack in Karachi killed 12 people, including six women and children. No group claimed responsibility for either incident.

Pakistan law enforcement agencies were responsible for numerous human rights violations, including detention without charge and extrajudicial killings. In March, Pakistan Prime Minister Imran Khan met with families of people who had been forcibly disappeared, allegedly by Pakistani security forces, and pledged that their concerns would be addressed. However, his government announced no investigations in any cases.

Pakistan has still not enacted a law criminalizing torture despite Pakistan’s obligation to do so under the UN Convention against Torture. In July, the Pakistan Senate unanimously approved a critically important bill outlawing police torture and otherwise seeking to prevent deaths in police custody. The law had not been passed by the National Assembly at time of writing. The law if passed would be the first time that Pakistan enacts a comprehensive definition of torture in line with Convention Against Torture. The bill also proposes criminal liability for death caused in police custody,

Pakistan has more than 4,600  prisoners on death row, one of the world’s largest populations facing execution. Those on death row are often from the most marginalized sections of society.

In June, the intergovernmental Financial Action Task Force (FATF) retained Pakistan as a jurisdiction under “Increased Monitoring”–a so-called gray list of countries that fall short of FATF standards for countering terrorism financing and money laundering. Pakistan has been on the gray list since 2018. The FATF noted that Pakistan had made progress by largely addressing 26 of 27 goals, but still needed to show that its investigations into terrorism financing and prosecutions “target senior leaders and commanders of UN-designated terrorist groups

In October, Pakistan’s Senate approved a bill that would decriminalize suicide; parliamentary approval was still pending at time of writing. Disability rights and mental health advocates welcomed the move as an important first step.

Pakistan’s penal code criminalizes same-sex sexual conduct, placing men who have sex with men and transgender people at risk of police abuse and other violence and discrimination. In July, activists claimed that the transgender community in Karachi was being targeted in an organized social media campaign to instigate violence against its members. On April 6, a 60-year-old transgender resident of Karachi’s Korangi neighborhood was shot and killed by unidentified assailants who broke into their home.

In April, a ruling party member tabled a resolution in the National Assembly demanding a debate on whether to expel the French ambassador for “anti-Islamic” remarks made by President Emmanuel Macron.

Pakistan’s relationship with United States, the country’s largest development and military donor, remained volatile in 2021. The United States acknowledged Pakistan’s significant role as one of the stakeholders in resolving the Afghanistan conflict. However, in September, US Secretary of State Antony Blinken said that the United States would reassess its relationship with Pakistan in formulating a policy on the future of Afghanistan. He also called on Pakistan not to recognize the Taliban government in Afghanistan unless it meets international demands. Pakistan’s Ministry of Foreign Affairs said Blinken’s remarks were “not in line with the close cooperation” between the two countries.

After the Taliban took control of Afghanistan in August, Pakistan signaled that it was prepared to recognize the Taliban government.

Pakistan and China deepened their extensive economic and political ties in 2021, and work continued on the China-Pakistan Economic Corridor, a project consisting of construction of roads, railways, and energy pipelines. In October, Pakistan carried out joint counterterrorism military exercises with China.