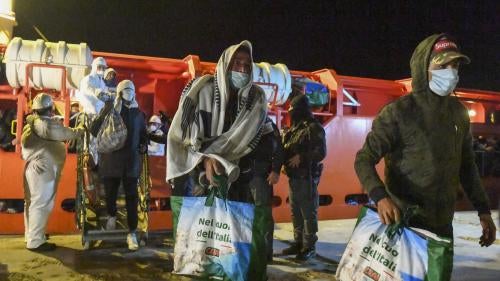 The Covid-19 pandemic continued to impact daily life, including access to education and employment. Italy renewed its migration cooperation with Libya and obstructed sea rescue organizations while nonetheless allowing disembarkations in Italy. The Senate rejected a bill to make incitement to violence or discrimination based on sex, gender, sexual orientation or gender identity an offense. Authorities failed to take steps to ensure access to abortion in areas where significant barriers to access, including high rates of conscientious objection remain. The European Commission noted rule of law concerns with respect to the judiciary and the media.

The government imposed restrictions on movement and activity periodically in different parts of the country due to elevated Covid-19 transmission rates. As of mid-September, only Sicily had significant restrictions in place though limits on numbers allowed to gather in public spaces and mask mandates remained throughout Italy. The state of emergency, declared at the end of January 2020, was set to expire at the end of 2021.

Schools throughout the country and at different grade levels adopted hybrid and entirely distance learning approaches, with elementary schools largely returning to in-person schooling. Approximately 3 million Italian students may not have been able to access remote learning during school closures due to a lack of internet connectivity or devices at home, according to estimates by the Italian National Institute of Statistics. Some schools adopted positive measures to ensure quality education for students with disabilities, including safe in-person learning, though organizations representing people with disabilities said that many children with disabilities did not receive a quality, inclusive education, or in some cases, any education at all during the pandemic.

Despite a slow start, Italy’s vaccination campaign had reached 80 percent of the eligible population by mid-October. As of mid-October, possession of proof of vaccination, a negative test, or recovery from Covid—the “green pass”—was obligatory in virtually all public spaces and private workplaces. Undocumented migrants and people experiencing homelessness faced bureaucratic and other obstacles to accessing the vaccine, and even when vaccinated, faced obstacles to obtaining the green pass.

Despite early release programs to alleviate overcrowding in prisons during the pandemic, in June Italian prisons were at 113 percent capacity according to the independent ombudsman for people deprived of their liberty. Limits on prison visits, movement within facilities, and other activities, imposed during the pandemic, remained in place in some prisons. Vaccination rates in prisons were in line with national rates.

Italy evacuated 4,890 Afghans—individuals who had worked with the Italian military mission and their families—out of Kabul between June and August. At time of writing, it was unclear whether they would be processed under the normal asylum procedure or would be granted prima facie refugee status. The government was pursuing arrangements to allow municipalities, associations, and private citizens to host Afghan families due to lack of capacity in the state reception system. In November the government announced agreements with faith-based and civil society organizations to facilitate “humanitarian corridors” to Italy for 1,200 Afghans from countries neighboring Afghanistan.

In January, a court in Rome ruled that pushbacks to Slovenia under a decades-old readmission agreement violated the Italian Constitution, the European Convention on Human Rights, and the EU Charter on Fundamental Rights because of the risk of chain refoulement and inhuman and degrading treatment in neighboring countries along the Balkan route. Migrants faced dire humanitarian conditions in border regions with France, while French police summarily returned unaccompanied children and adults to Italy.

In July, parliament renewed funding for migration cooperation with Libya despite overwhelming evidence of brutality against migrants, the systematic use of arbitrary detention, and the complete absence of an asylum system in Libya. Libyan forces receiving support from Italy and the EU interdicted at sea and took back to Libya more than 27,500 people by late October.

According to government statistics, more than 52,770 people reached Italy by sea, including 7,190 unaccompanied children, by late October. There was an increase in boats arriving without the assistance of rescue ships to Lampedusa, an Italian island in the Mediterranean Sea, where the reception facility able to accommodate up to 250 people was periodically well over capacity, with more than 1,200 at one point in August.

Italian authorities allowed nongovernmental rescue ships to disembark, usually after some delay. However, they also often held ships in port for administrative reasons, inhibiting rescue efforts. The Council of Europe Commissioner for Human Rights expressed concern about Italy’s use of ferries to quarantine people arriving by sea and called on the government to prioritize prompt disembarkation on land.

According to the International Organization for Migration, 1,224 persons died or went missing in the central Mediterranean by late October, many while attempting to cross to Italy.

In January, the UN Human Rights Committee found Italy responsible for contributing to the deaths in 2013 of an estimated 200 people, including 60 children, when it failed to respond adequately to distress calls about an overcrowded migrant boat in the Mediterranean.

Prosecutors in Agrigento opened an investigation in July against Libyan authorities for “attempted shipwreck” of a migrant boat following a complaint, with footage and photos, filed by the nongovernmental organization Sea-Watch of an incident in late June in which a Libyan coast guard boat maneuvered dangerously and appears to fire shots. In May, the same office dropped all charges against Carola Rackete, the Sea-Watch captain who had docked her rescue ship in Lampedusa without authorization in 2019.

In the first ruling of its kind against a commercial ship’s captain, in October a court in Naples convicted and sentenced to one year in prison the captain of the Asso 28, a service ship for an Italian oil platform in the Mediterranean Sea, for returning more than 100 people to Libya in July 2018 following a rescue.

The trial of former Interior Minister Matteo Salvini for abduction and dereliction of duty over his handling of the disembarkation of 147 people from a rescue ship belonging to the Spanish NGO Open Arms in August 2019 began in October in Palermo. In May, a judge in Catania dismissed a similar case against Salvini involving a delay in disembarkation from an Italian military ship, also in 2019.

One year after a flawed program was launched to provide residency permits to undocumented migrants working in agriculture, domestic work, and home care, only 25 percent of the roughly 207,800 applications had been processed.

In September, a court in Calabria convicted and sentenced Domenico Lucano, the former mayor of Riace, to more than 13 years in prison—double what prosecutors had requested—on charges of abetting irregular immigration and irregularities in a program that settled and employed hundreds of asylum seekers in the small town.

At time of writing, the trial of four men was ongoing for the brutal beating to death in September 2020 of 21-year-old Willy Monteiro Duarte, a Black Italian, in a town on the outskirts of Rome. The men are accused of voluntary homicide; prosecutors did not charge them with the aggravating circumstance of racial bias.

One year after it was approved by the lower house of parliament, the Senate rejected a bill to make incitement to violence or discrimination “based on sex, gender, sexual orientation or gender identity” a crime. The bill would have broadened existing law on bias crimes in Italy, increased funding for projects to prevent and counter violence based on sexual orientation and gender identity, as well as for victim support, and instituted a national day against homophobia.

The Council of Europe Committee of Social Rights said in January that Italy had failed to take adequate measures to ensure access to abortion under national law given the high number of conscientious objectors among healthcare workers. In its annual report on access to abortion, in July, the Ministry of Health provided data from 2019 indicating that 67 percent of gynecologists and 43.5 percent of anesthesiologists in Italy refuse to perform abortions, a slight decrease over the previous year.

Data published in May showed that calls to the national hotline for victims of gender-based violence and stalking increased by 79 percent in 2020, in particular during the months of lockdown, compared to the year before. The government said that reports of gender-based violence decreased by 8 percent in the first half of the year compared to the same period in 2020. The Interior Ministry reported that 86 women were killed by relatives or people they knew in the first ten months of the year, 59 of them by a partner or ex-partner.

At time of writing, the executive branch had yet to formally ratify International Labour Organization Convention 190 on violence and harassment in employment though parliament gave its approval in January.

In its July European rule of law report, the European Commission noted the need to strengthen judicial independence and tackle excessive length of proceedings in Italy. The report cited the lack of an effective law regulating conflicts of interest in the media sector as reason for concern over political interference in media freedom and called physical attacks and intimidation against journalists in Italy “an issue of concern.” Italy’s Interior Ministry recorded a 19 percent increase in such cases in the first seven months of 2021 compared to the same period in 2020.

The revelation in April that prosecutors in Sicily secretly recorded hundreds of conversations between at least 15 journalists working on migration issues and NGO staff caused significant concern about violation of confidentiality.