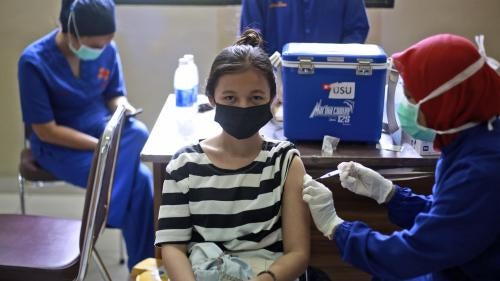 Covid-19 cases surged in Indonesia in mid-2021, prompting the government to lock down most of Java, Bali, and many other parts of the archipelago in July and August. At time of writing, the government had confirmed more than 4.2 million cases and 142,000 deaths. Because many people self-isolated and did not report their symptoms or seek testing, public health researchers believe the actual death toll is much higher.

Religious minorities continue to suffer from discriminatory regulations, including the 1965 blasphemy law and the so-called religious harmony regulation that makes it difficult for minorities in this predominantly Sunni Muslim country to build houses of worship, including non-Sunni minorities (Ahmadiyah, Shia) as well as non-Muslim minorities (Christians, Hindus, Buddhists, and Confucians, as well as followers of local religions such as Sunda Wiwitan).

On May 3, a panel of three male judges at the Supreme Court ruled that a new government regulation issued in February, which allowed millions of girls and women in thousands of state schools a basic freedom—to choose whether or not to wear a jilbab (Muslim apparel that covers the head, neck, and chest)—had “violated four national laws.” The ruling stated that children under 18 have no right to choose their clothes.

The government adopted the regulation after a father in Padang, West Sumatra, publicized his daughter being forced to wear a jilbab. A Human Rights Watch report documented widespread bullying of girls and women into wearing a jilbab, and the deep psychological distress it can cause. Girls who do not comply have been forced to leave school or withdraw under pressure, while female civil servants, including teachers and university lecturers, have lost their jobs or resigned. Many Christian, Hindu, Buddhist, and other non-Muslim students and teachers have also been forced to wear the jilbab. Human Rights Watch is aware of at least 64 mandatory jilbab regulations in Indonesia.

In July, Army Chief Gen. Andika Perkasa told army commanders that the required medical check-up in the recruitment process for female officers should be similar to the check-up used for male officers, ending the abusive and unscientific “virginity test.” Applicants should be assessed only on their ability to take part in physical training, he said. He also clarified that male army personnel seeking army permission to get married should no longer be required to submit medical check-ups for their fiancées.

In August, the National Police separately arrested and detained two clergymen on blasphemy charges. Muhammad Kece, a Christian preacher, was arrested for alleged blasphemy against Islam; Yahya Waloni, a Muslim imam, was arrested at his Jakarta house after allegedly saying in a sermon that the Bible was fake.

On January 28, 2021, authorities in Aceh province publicly flogged two gay men 77 times each after a vigilante mob raided their apartment the previous November, allegedly caught them having sex, and handed them over to the police.

The Jakarta-based LGBT group Arus Pelangi has identified 45 anti-LGBT regulations in Indonesia, including the 2008 Anti-Pornography Law that categorizes homosexuality as “deviant sex.”

In Semarang, policeman Tri Teguh Pujianto is challenging his 2018 dismissal from the Central Java Police because of his sexual orientation. He filed his case in March 2019. A documentary entitled “Teguh,” meaning “firm,” was produced supporting his case. In September, the Medan district court granted a transgender man permission to legally change his name to match his identity.

The Indonesian government is failing to protect the rights of communities living on or near land allotted to commercial agriculture. Due to minimal ongoing monitoring and oversight, some of these plantations degrade the environment they operate in and, in some cases, cause almost irreparable damage to peatlands, one of the world’s most important carbon sinks.

PT Sintang Raya, a subsidiary of South Korean Daesang Corporation, has established and expanded its plantations in peatlands in three tidal villages in West Kalimantan without genuine consultation with local residents and without adequate compensation for loss of their farmland or livelihoods.

Sporadic fighting between Indonesian security forces and the West Papua National Liberation Army continued in the central highlands area, killing at least 25 civilians in 2021, including Reverend Yeremia Zanambani, who had translated the Bible into the Nduga language.

On May 9, Indonesian police arrested Victor Yeimo, a spokesman for the West Papua National Committee, in Jayapura. Police charged him with treason for a 2019 statement made during anti-racism protests and ensuing riots in Papua and West Papua calling for a referendum on independence.

Indonesia, one of the world’s top 10 emitters of greenhouse gases, is contributing to the climate crisis taking a mounting toll on human rights around the globe. In its 2021 update to its national climate action plan, Indonesia reiterated its 2016 goals, rather than establishing more ambitious targets as required by the Paris Agreement. Its climate plan is “critically insufficient” to meet the agreement’s goal to limit global warming to 1.5°C above pre-industrial levels, according to The Climate Action Tracker. If all countries’ commitments were in this range, the global temperature increase would exceed 4°C by the end of the century.

Government data released in March suggests deforestation dropped significantly between 2019 and 2020. Alternative estimates by Global Forest Watch (GFW) confirm a downward trend. In September, a government-mandated moratorium on new oil palm plantations lapsed. Despite an official ban on primary forest clearing in force since 2011, the latest GFW data indicates Indonesia lost 250,000 hectares in 2020. In November 2021, at the global climate summit in Glasgow, the Indonesian government signed a global pledge to end forest loss by 2030 – but its environment minister promptly criticized the pledge and vowed to continue clearing forests as part of ‘development’ plans.

Indonesia has taken few steps to move away from reliance on coal for electricity generation, a major contributor to greenhouse gas emissions. In May, the government said it would build more coal-fired power stations but would shut them all down in 2060. Indonesia could prevent tens of thousands of premature deaths linked to air pollution by rapidly reducing its reliance on coal-fired electricity.

Floods, droughts, sea level rise, changes in rainfall patterns, and warmer temperatures induced by climate change are expected to take a toll, requiring Indonesia to take steps to protect at-risk populations from their foreseeable harms. In January 2021, South Kalimantan and Borneo declared a state of emergency after heavy rainfall and flooding displaced tens of thousands.

US President Joe Biden said in a speech in Washington, DC, on July 27: "What happens in Indonesia if the projections are correct that, in the next 10 years, they may have to move the capital because they will be underwater? That's important. It's a strategic question as well as an environmental question." The Indonesian government is finalizing a plan to move the capital from Jakarta to North Penajam Paser in Kalimantan, estimating 15 to 20 years for the relocation.

Indonesia played a role in excluding Myanmar junta leader Min Aung Hlaing from the Association of Southeast Asian Nations (ASEAN) summit on October 26-28. ASEAN said that a lack of progress on a peace roadmap that the junta had agreed on in April has prompted the group to exclude the junta. The move was unprecedented, as ASEAN usually works with compromises.