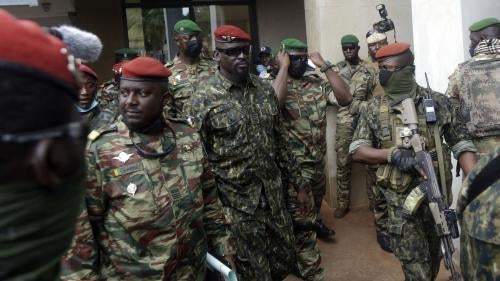 On September 5, Guinean army officers staged a coup and arrested President Alpha Condé, who won the October 2020 presidential election after a year-long effort to secure a third term in office. Col. Mamady Doumbouya, head of Guinea’s special forces and of the putschists, who called themselves the National Committee for Reconciliation and Development (Comité national du rassemblement et du développement, CNRD), proclaimed the dissolution of the government and constitution and announced a transition period. On September 28, the new military authorities adopted a transitional charter outlining the missions and duties of the transitional government and appointed Doumbouya as head of the transition. The international community widely criticized the coup. The Economic Community of West African States (ECOWAS) suspended Guinea’s membership on September 8 and imposed targeted sanctions, including travel bans and asset freezes, on the coup leaders and their families on September 16.

The coup came after a period of political instability following a March 2020 constitutional referendum that allowed Condé to run for a third term and the October 2020 presidential election, which were marred by violence. Security forces used excessive force during opposition-led demonstrations and arrested and detained over 350 leaders and members of the National Front for the Defense of the Constitution (Front national pour la défense de la Constitution, FNDC), a coalition of civil society groups and opposition parties, during the period surrounding the presidential vote. In April, Condé’s government released 40 of them. In September, the new military authorities released 79 others and allowed 4 opponents in exile to return to Guinea.

Condé’s government failed to meet a self-imposed June 2020 deadline for the trial of alleged perpetrators of the 2009 stadium massacre. There was some modest renewed progress toward the trial in mid-2021. While the coup may disrupt progress, Doumbouya announced on September 5 that “justice will be the compass that will guide every Guinean citizen,” making a symbolic appearance at this year’s commemoration of the stadium massacre.

Guinea lost privileged access to the US market offered under the African Growth and Opportunity Act (AGOA). On November 2, the Biden administration announced it intends to cut trade benefits for Guinea by January 1, 2022, “for not having established, or not making continual progress toward establishing, the protection of the rule of law and of political pluralism.”

The health state of emergency, imposed by former President Condé in March 2020 to curb the spread of Covid-19, is still in place. In July 2021, following increased confirmed cases, Condé imposed more restrictive measures, including a ban on large gatherings, and curfew at 10 p.m. instead of midnight, which had been maintained by the new military authorities. The political opposition and civil society have expressed concerns about the use of the state of health emergency as an excuse to quell dissent and violate rights.

School closures due to the Covid-19 pandemic affected 2.6 million children. After the pandemic’s start in 2020, schools were closed for 151 days, but reopened in September 2020 and remained open through 2021.

On April 29, authorities under former President Condé ordered the release of 40 people after the Dixinn court in Conakry found no grounds for prosecution. They had been in pretrial detention since October 2020, when they were arrested on various charges following opposition-led demonstrations during the election period. On May 5, authorities released journalist Amadou Diouldé Diallo, who was arrested in March after he criticized President Condé in one of his articles. On June 18 and 22, Condé granted pardons to two political opponents, Souleymane Condé, FNDC coordinator, and Youssouf Diabaté, a FNDC member.

Foniké Mengué—arrested on September 29, 2020, in Conakry while preparing to participate in a FNDC-led protest against President Condé’s decision to run for a third term—was sentenced to three years in prison for "communication and disclosure of false information, and threats of violence or death” during his appeal trial on June 10, 2021. On August 2, he was transferred to a hospital as his health deteriorated. He was on hunger strike between December 25, 2020, and January 8, 2021, protesting repeated adjournments of his trial. He was also infected by Covid-19 in March while in detention at Conakry’s central prison. His relatives accused the government of denying him access to adequate medical treatment.

Abdoulaye Bah was among a group of four opposition members released on health grounds in July by authorities under former President Condé, along with Ibrahima Cherif Bah, Ousmane Goudal Diallo, and Cellou Balde. The four had been arrested in November 2020 for alleged involvement in post-election violence. However, on August 10, Abdoulaye Bah was returned to prison for “violating the conditions of his release.”

Deaths in Custody, Arbitrary Arrests, and Restrictions on the Opposition

Four suspected political opposition supporters died in custody between November 2020 and January 2021. Mamadou Oury Barry, 21, detained as a suspected political opposition supporter, died on January 16. His family and lawyer said he died in his cell and did not receive proper medical attention for ill-treatment and an illness he suffered in detention, but authorities stated that he died at the hospital of “natural causes.”

On February 3, the Dixinn Court of First Instance in Conakry ruled that the headquarters of the main opposition party, the UFDG, which had been shut down in October 2020, should remain closed. On March 17, Conakry’s airport authorities prevented Cellou Dalein Diallo, leader of the UFDG, from traveling to Ivory Coast and seized his passport. On May 24, the prosecutor of the Dixinn Court of First Instance said his travel ban had been maintained and could be further extended. Authorities did not provide any explanation for the ban. The new military authorities lifted the travel ban in September and allowed Diallo to access his offices.

On July 9, judicial authorities sentenced Ismaël Condé, a former member of the ruling party who joined the opposition, to three years and four months in prison for "insulting the head of state," after he declared that only weapons could drive Alpha Condé from power.

Although Condé’s government announced investigations into alleged security force abuses during demonstrations—including the establishment of a pool of judges to investigate the “serious provocations, abuses, and destruction” committed in Conakry during the March 2020 legislative elections and referendum—a lack of political will, limited investigative capacity, and witnesses’ unwillingness to come forward meant that most investigations did not result in charges against members of the security forces. The trial of several police officers for using a woman as a human shield to protect themselves from protesters in January 2020, which opened in March 2020, stalled.

Twelve years after security forces massacred over 150 peaceful opposition supporters and raped dozens of women at a stadium on September 28, 2009, those responsible have not been tried.

Even before the coup, concerns over an evident lack of will for the trial to go forward in Guinea increased amid stagnation in the organization of the trial by the justice sector. Nevertheless, in mid-2021, there were some new developments, with renewed meetings of a strategic committee established to plan the trial, construction of the courtroom underway, and training of magistrates planned. Several people charged in the case have been in detention beyond the legal limit while they wait for the trial to start.

In December 2020, the International Criminal Court, which is conducting a preliminary examination of the 2009 massacre, expressed its disappointment in the fact that the trial had not yet opened and stated it was looking to Guinean authorities to demonstrate their willingness and ability to fight impunity in the coming months.

Guinea’s natural resources, notably bauxite, the ore needed to produce aluminum, remained central to the economy. The bauxite sector continued to expand rapidly in the Boké and Boffa regions, leading to thousands of farmers losing their land to mines, often for inadequate compensation, and damaging vital water sources in the area. A coalition of car manufacturers, who are increasing their demand for aluminum as they transition to electric vehicles, in January 2021 expressed concern about bauxite mining companies’ practices in Guinea.

A Chinese-backed consortium continued preparations for development of the massive Simandou iron ore deposit in southeastern Guinea. The consortium, which is already Guinea’s largest bauxite exporter, has in the past failed to respect international human rights and environmental standards.

Guinea’s new military government on September 16 reassured mining companies that they could continue their operations, but said it would ensure mining revenues improve living standards and that mining companies respect strong environmental and social standards. The Extractive Industries Transparency Initiative (EITI), a global resource revenue transparency initiative that counts Guinea as a member, warned that the coup could undermine accountable governance.

On May 8, a landslide at a clandestine gold mine in Guinea's north-eastern Siguiri region killed 15 people. The government announced the opening of an investigation to ascertain the circumstances and causes of the incident. There are hundreds of unofficial artisanal mines around Siguiri.