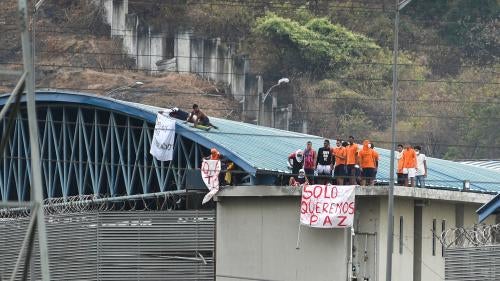 In May, President Guillermo Lasso took office. The 137 lawmakers of the National Assembly, where Lasso lacks a majority, started their four-year term in May, and elected the assembly’s first Indigenous president. One of Lasso’s first actions was to introduce a new bill aimed at undoing the severe damage to free speech caused by former President Rafael Correa during his decade in power.

Corruption, inefficiency, and political interference have plagued Ecuador’s judiciary for years. Reforms under former President Lenín Moreno to repair the Correa administration’s damage to democratic institutions improved the independence of key institutions but reports of trial delays and allegations of improper pressure on courts and lack of due process in high-profile corruption cases continued.

Under President Moreno, a transitional Council of Citizen Participation was appointed to repair the Correa administration’s damage to key institutions by dismissing authorities after evaluating their performance, and appointing new members to the Judiciary Council, Constitutional Court, and Prosecutor’s Office, among other institutions.

However, during 2021, allegations persisted of unjustified delays during trials, government officials improperly pressuring courts, and lack of due process in high-profile corruption cases.

Use of Force by Security Forces

On May 6, the Constitutional Court nullified a May 2020 Defense Ministry resolution giving the military broad powers to participate in security operations at demonstrations and meetings, and to use lethal force. Security forces had used excessive force against demonstrators in October 2019. The role of the armed forces in law enforcement must be exceptional, temporary, limited to what is strictly necessary, and complementary to that of law enforcement agents, the court held.

The Constitutional Court instructed the National Assembly to consider its relevant findings—and international standards—during debate of a bill, pending at time of writing, to regulate use of force by security agencies.

In August, the Ombudsperson’s Office found that police officers used excessive force in the rural town of La Merced de Buenos Aires when they dispersed residents who were blocking a road and protesting a government mining concession to an Australian mining company.

In March, a truth commission created by the Ombudsperson’s Office to investigate excessive use of force during 2019 demonstrations attributed the deaths of six protesters to security forces. It attributed around 75 percent of human rights violations during the protests to police and 13 percent to the military.

Overcrowding and other poor conditions, violence, and inadequate health care are longstanding problems in prisons.

In September, a prison uprising in Guayaquil city left over 118 detainees dead and 52 injured. For the second time since taking office, President Lasso decreed a state of emergency in prisons, this one for 90 days.

Two other uprisings, in February and July, left over a hundred detainees dead and injured dozens of detainees and security officers, including a female officer who was raped.

In all three uprisings, police officers and soldiers intervened against armed criminal groups inside the facilities.

On April 28, the Constitutional Court ruled abortion decriminalized in all cases in which the pregnancy results from rape. To comply, the Ombudsperson’s Office introduced a bill on June 28 to guarantee access to abortion for victims of rape; six months are allowed for legislative debate at the National Assembly.

Until April, women and girls could seek an abortion only when they had a “mental disability” and had been raped or when the pregnancy endangered their health or life.

Stigmatization, mistreatment by health professionals, fear of criminal prosecution, and a narrow interpretation of the health exception remain barriers to abortion access. Low-income women appear more likely to be prosecuted.

The Attorney General’s Office reported 49 femicides–defined as murders of women based on their gender–between January and September. But civil society organizations reported over 100 cases of killings of women in just the first six months of 2021.

Sexual violence is a longstanding, pervasive problem in public and private schools. Between January 2014 and February 2021, Ecuador’s Education Ministry registered 3,777 complaints of school-related sexual violence by teachers, administrative staff, and other students, including online.

In March, the National Assembly changed Ecuador’s education law, adding mechanisms against violence in schools and guaranteeing free access to information about sexuality and sexual and reproductive rights.

The government’s pandemic response included nationwide school closures, starting in April 2020. Ecuador ranked 13th, worldwide in total days of school closures, UNICEF reported, with 169 as of February 2021. Almost 4.5 million students have missed at least three-quarters of a year of classroom instruction. During the pandemic, only 4 out of 10 households with children under 5 have had access to early childhood development services, including pre-primary education.

A substitute decision-making model for people with disabilities still prevails, failing to recognize their full legal capacity in all areas of life, including the right to informed consent to health treatment.

On March 26, the Inter-American Court of Human Rights ruled that Ecuador failed to properly inform Luis Eduardo Guachalá Chimbo, a 23-year-old with an intellectual disability, and his mother, about his treatment at a public psychiatric hospital and did not adopt all measures to obtain his full consent. Guachalá disappeared from the hospital in 2004, and Ecuador did not fulfill its obligation to search for him, the court ruled. He has never been found.

The National Assembly has not yet complied with Constitutional Court rulings to revise legal provisions on civil marriage to include same-sex couples, reform the legal gender recognition procedure for transgender people to be based on self-determination, regulate assisted reproduction methods, and allow for same-sex couples to register their children with their surnames.

On June 28, the Secretary for Human Rights created a subsecretary office for diversity, charged with developing policies to prevent violence against lesbian, gay, bisexual, and transgender (LGBT) people. The office will not have its own budget.

Indigenous peoples are entitled, in the constitution, to communal possession of ancestral lands and consultation regarding resources and projects on them. These rights are not fully protected, human rights organizations and community leaders report.

Several communities have filed complaints seeking protection for their ancestral lands. In one case, the National Court will decide whether to uphold a lower court’s order to evict loggers and farmers trespassing on the Siekopai Indigenous people’s territory in the Amazonian province of Sucumbíos. Trespassers occupy half of the territory and have cleared a quarter of the forests, community leaders said.

Indigenous people were impacted by Covid-19. On June 18, 2020, Waorani Indigenous communities successfully sued the government for its inaction. The judge ordered the Ministry of Health to send medical personnel and equipment to respond to an outbreak. In July this year, 126 Waoranis were vaccinated.

Venezuelans have various options for obtaining a visa, but with elevated costs and long processes, slowed by Covid-19. On June 17, President Lasso announced a regularization process that could benefit around 450,000 Venezuelans.

On May 10, the National Assembly adopted a data protection law, introduced under former President Moreno after a major breach of citizens’ personal data. The law protects, under certain circumstances, citizens’ rights to access, correct, and erase incorrect data about them stored in databases

In 2018, legislators eliminated the agency known as SUPERCOM, which the Correa administration had used to harass and punish media. In 2020, they rescinded a problematic provision identifying communication as a public service.

On May 6, the lame duck National Assembly approved a Law to Prevent Violence, Digital Harassment, and Violation of Privacy. Though intended to address online gender-based violence, it threatened to severely restrict the ability of journalists and others to document and expose misconduct and human rights violations. President Lasso vetoed some problematic provisions on criminal defamation and disclosure of secrecy. However, legislators retained an overly broad definition of criminal defamation, which can be committed “through any of the information and communication technologies.”

In 2010, a truth commission to investigate government abuses from 1984 to 2008 documented gross human rights violations against 456 people. Final rulings have been rendered in only two prosecutions. Others appear to be stalled.

The pandemic hit Ecuador hard, with 513,026 reported cases and 32,899 deaths as of October. In June 2020, amid allegations that corpses of people who died after getting Covid-19 had disappeared, a judge ordered authorities to identify them in hospital and police morgues in Guayaquil City. At time of writing, dozens of families were still looking for relatives’ bodies.

Despite some improvements, the transparency of the government’s spending in response to the pandemic has gaps, particularly related to beneficial ownership and publication of emergency procurement contracts. The Attorney General’s Office has investigated allegations of corruption related to Covid-19 such as embezzlement and overpriced purchases of medical supplies.

President Lasso’s administration accelerated roll-out of vaccines, bringing the percentage of people fully vaccinated to over 57, as of October.

On June 14, the Inter-American Court of Human Rights held a hearing on allegations of human rights violations in the 2011 convictions of journalist Emilio Palacios and three members of the board of the newspaper El Universo for criminal defamation in an opinion piece criticizing then-President Correa. At time of writing, a decision was pending.

On July 13, the National Assembly ratified the Inter-American Convention Against All Forms of Discrimination and Intolerance, which disallows discrimination regarding gender expression, migratory circumstances, and genetic characteristics.

In August, the office of the United Nations High Commissioner for Refugees (UNHCR) released a survey showing that 82 percent of migrants and refugees in Ecuador would face significant risks if returned to their country of origin. Since a humanitarian visa program ended, UNHCR noted, regularization has become “difficult” in Ecuador for the Venezuelan population.

During the UN General Assembly in September, President Lasso expressed concern for fleeing Venezuelans. His administration has criticized the human rights situation in Venezuela and Nicaragua.

Ecuador joined 70 other countries in highlighting the need for a safe exit for fleeing Afghans. The 5,000 Afghans whom Ecuador volunteered to receive temporarily appear to have been relocated to other countries by the United States instead.