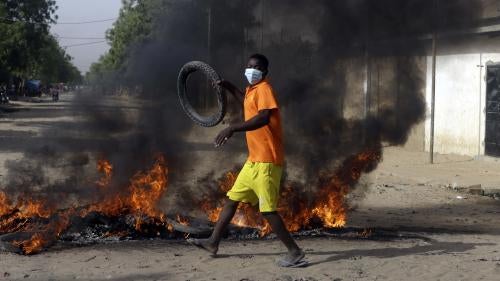 On April 19, the Chadian electoral commission announced that President Idriss Déby Itno had won a sixth term in the April 11 presidential elections. The pre-election period was marred by a ruthless government crackdown on protesters and the political opposition. On April 20, a spokesperson for the Chadian army announced that President Déby, 68, had died of injuries suffered in clashes between government forces and rebels from the Front for Change and Concord in Chad (FACT), based in southern Libya. The exact circumstances of Déby’s death remain unclear. The government and parliament were dissolved, and a Transitional Military Council (TMC) headed by Mahamat Idriss Déby Itno, Déby's son, took control of the country and promised an 18-month transition.

The period following elections and Déby’s death was characterized by violence. During protests in late April and May, security forces used excessive force against opposition-led demonstrations, and arrested more than 700 people, many who reported ill-treatment, including torture, in detention. On October 2, security forces fired teargas canisters, rubber bullets, and potentially live ammunition at protesters in N’Djamena, injuring about 40 to 45 people and damaging private property.

On August 10, the transitional president invited rebel groups, with whom he had previously refused to negotiate, to participate alongside other stakeholders in a national dialogue which started on November 5. In a November 2 joint statement, Chad’s main rebel groups, including the Union of Resistance Forces (UFR) and the FACT said they are willing to participate in the national dialogue under “certain conditions,” such as the release of members of their groups from prison, and a general amnesty. Opposition and civil society groups criticized the proposed national dialogue but called on transitional authorities to ensure it is inclusive.

Former Chadian dictator Hissène Habré died of Covid-19 on August 24 in Dakar, Senegal’s capital, where he was serving a life sentence for serious international crimes. In September, a delegation from the African Union visited N’Djamena, Chad’s capital, to finalize a trust fund aimed at compensating 7,396 victims of Habré’s crimes.

The armed Islamist groups Boko Haram and the Islamic State in West Africa Province (ISWAP) continued their attacks in the Lake Chad area, targeting both civilians and military forces, and causing restrictions in humanitarian access. On August 21, Chad announced it will recall half of its 1,000 troops from the G5 Sahel Joint Force, a military force created to counter Islamist armed groups in the tri-border area of Mali, Burkina Faso, and Niger.

According to the United Nations, at least 309 people were killed, 182 injured, and more than 6,500 were internally displaced during intercommunal violence in Chad in 2021.

Chad’s security forces cracked down on protesters and the political opposition in the lead-up to the country’s April 11 presidential election. In the capital N’Djamena, they used teargas to disperse peaceful protesters who called for political change and an end to social and economic injustices on February 6, February 15, March 20, and March 27, injuring dozens of protesters and human rights activists, including Mahamat Nour Ibedou, Secretary General of the Chadian Human Rights Convention, a local rights group, and bystanders. They also arbitrarily arrested at least 112 opposition party members and supporters and civil society activists, subjecting some to severe beatings and other ill-treatment.

In an attack on the home of a political opposition leader and presidential candidate, Yaya Dillo, on February 28, security forces killed his 80-year-old mother and wounded five other family members.

Opposition parties accused the government of using Covid-19 regulations to block their campaigns and ban political gatherings, including a strict lockdown that was imposed in N’Djamena from January 1 to March 10.

Security forces used excessive force, including indiscriminate live ammunition, to disperse opposition-led demonstrations across Chad in the aftermath of the April 11 election and Déby’s subsequent death.

Members and supporters of opposition parties and civil society organizations united under a coalition known as Wakit Tamma (“the time has come” in Chadian Arabic) and other residents demonstrated in N’Djamena, Moundou, Doba, and other cities across the country, on April 27 and 28, and May 8 and 19, challenging the transitional military council’s ban on demonstrations and demanding a transition to civilian rule.

During protests, at least seven people were killed, dozens were wounded, and security forces arrested more than 700 people, many who reported ill-treatment and torture in detention. Among those whom security forces and other authorities arrested, threatened, and intimidated were injured persons being treated at health facilities. All those arrested were released in the following months.

On October 2, hundreds of N’Djamena residents joined members and supporters of Wakit Tamma to protest the TMC’s rule and seek amendments to Chad's transitional charter. Although the authorities had authorized this demonstration, anti-riot police—and in at least one case, gendarmes—fired teargas canisters, rubber bullets, and potentially live ammunition at the protesters, injuring about 40 to 45 people and damaging private property.

Boko Haram and ISWAP continue to commit serious human rights abuses against civilians in the Lake Chad area, leading to dozens of deaths and a major humanitarian crisis. The UN said over 400,000 people were internally displaced in September in the region.

Former Chadian dictator Hissène Habré died on August 24 in Dakar, where he was serving a life sentence following his conviction for serious international crimes. This followed a landmark effort to ensure justice for his role in serious human rights violations.

Habré’s government was responsible for widespread political killings, systematic torture, thousands of arbitrary arrests, and targeting of particular ethnic groups. Habré himself was involved in the abuses during his rule in Chad from 1982 to 1990, principally by maintaining tight control over his feared political police, the Documentation and Security Directorate (DDS), whose members tortured and killed those who opposed Habré or simply belonged to the wrong ethnic group.

An appeals court confirmed Habré’s conviction in April 2017 and awarded 82 billion CFA francs (approximately US$150 million) to 7,396 victims, mandating an African Union Trust Fund to raise the money by searching for Habré’s assets and soliciting contributions. In September, a delegation from the African Union visited N’Djamena, Chad’s capital, to finalize the establishment of the Trust Fund, which could help pave the way for victims of his crimes to receive long sought reparations.

Intercommunal and inter-ethnic violence intensified across Chad, especially in the eastern region, primarily in areas where availability of natural resources, including water and land, is limited. Local human rights groups accused the government of ignoring these conflicts and failing to prevent the violence and protect the population. According to the UN, at least 309 people were killed, 182 injured, and more than 6,500 internally displaced in intercommunal violence in Chad in 2021.

On April 14 and 15, intercommunal clashes between herders and farmers in Am-Barid and Siheb, Salamat province, led to over 100 deaths and 100 injured, according to the UN. On August 7 and 8, intercommunal clashes caused by a conflict over land between local farmers and herders in Hadier Lamis province led to the death of at least 25 people, according to international media. Intercommunal violence between sedentary farmers and nomadic herders killed at least 28 people on September 19 and 20 in the villages of Kidji-Mina and Tiyo, eastern Chad, according to international media and local human rights groups.