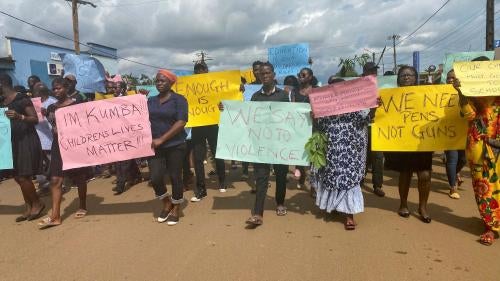 Separatists, who have violently enforced a boycott on education since 2017, continued to attack students and education professionals.

The Islamist armed group Boko Haram increased its attacks in the Far North region from January to April, killing at least 80 civilians, with over 340,000 internally displaced as of August 2021. In responding to the armed conflict, government forces have also been responsible for violations of international humanitarian and human rights law, including unlawful killings and arbitrary arrests.

The government continued to restrict freedom of expression and association, while the state-sanctioned persecution of lesbian, gay, bisexual and transgender (LGBT) people intensified. Government forces subjected Cameroonian asylum seekers deported from the United States to serious human rights violations following their return, including physical assault and abuse, arbitrary arrest and detention, extortion, and confiscation of identity documents, thus impeding freedom of movement, ability to work, and access to public services. The government’s response to the Covid-19 pandemic lacked transparency and was marred by allegations of corruption and misappropriation of funds.

Based on Human Rights Watch’s field and open source research, at least 4,000 civilians have been killed by both government forces and armed separatist fighters since late 2016 in the North-West and South-West regions, as separatists seek independence for the country’s minority Anglophone regions.

On January 10, army soldiers killed at least nine civilians, including a woman and a child, in Mautu village, South-West region. The soldiers also looted scores of homes and threatened residents.

In Gom village, North-West region, on June 8, two soldiers broke into the house of fon (the local traditional authority) and harassed eight people there, including a 72-year-old man whom they beat. They also shot and killed Nwang Lydia, a 60-year-old woman, after she failed to provide information about a separatist fighter.

On June 9, soldiers from the regular army and the elite Rapid Intervention Battalion (Bataillon d'Intervention Rapide, BIR) killed a 58-year-old man and raped a 53-year-old woman during a security operation in and around Mbuluf village, North-West region. They also broke into, damaged, and looted at least 33 shops and homes, including the residence of the fon in Ndzeen village.

On October 14, a gendarme shot and killed Caroluise Enondiale, a 4-year-old girl, on her way to school in Buea, South-West region. An angry mob responded by lynching the gendarme.

On November 10, an improvised explosive device was thrown on to the roof of a lecture hall at the University of Buea, South-West region, wounding at least 11 students. At time of writing no one had claimed responsibility for the attack, but authorities blamed separatist fighters.

Separatist fighters continued to kill, torture, assault, and kidnap civilians. They also continued their attacks against education. According to the United Nations, 700,000 students were out of school in March 2021 as a result of the crisis.

Separatist fighters killed three tribal chiefs in Essoh Attah village, South-West region, on February 13. On February 27, armed separatists kidnapped a medical doctor in Bali, North-West region and threatened to kill him before releasing him the same day after a ransom payment.

Restrictions on Humanitarian Access and Abuses against Aid Workers

Humanitarian access is severely restricted and humanitarian workers have been victims of attacks by both government forces and groups separatist armed groups. In December 2020, the Cameroonian authorities suspended all activities of Médecins Sans Frontières (MSF, Doctors Without Borders) in the North-West region, accusing the organization of being too close to Anglophone separatists. The move forced MSF to withdraw from the region, leaving tens of thousands of people without access to vital health care.

Separatist fighters have also hindered aid agencies’ access in the areas under their control. On February 4, a nurse working with an international nongovernmental organization (NGO) was shot and injured as her ambulance was caught in the crossfire during a separatist attack on Mbalangi village, South-West region. On June 25, fighters from the separatist armed group Ambazonia Defense Forces (ADF) stopped a humanitarian vehicle in Guzang, North-West region, kidnapped the four staff members, beat one, and released them the following day.

Attacks in the Far North by Boko Haram

In the first half of 2021, attacks and raids by the Islamist armed group Boko Haram increased in the Far North Region, with at least 80 civilians killed. On January 8, a Boko Haram suicide attack killed at least 14 civilians, including 8 children, and wounded 3 others, including 2 children. The presumed death in May of Abubakar Shekau, the leader of Boko Haram, in a confrontation in Nigeria with the splinter faction Islamic State West Africa Province (ISWAP), helped consolidate ISWAP’s power and increased insecurity in Cameroon’s Far North region.

The government limited the ability of the political opposition to function freely. Authorities prohibited a demonstration by the country’s main opposition party, Cameroon Renaissance Movement (Mouvement pour la renaissance du Cameroun, MRC), planned for July 25 in Yaoundé, the capital, citing concerns around Covid-19 and general public order. On the same day, a demonstration by supporters of the ruling party took place in Bertoua, Eastern region.

On August 9, gendarmes arbitrarily arrested prominent tech entrepreneur, human rights campaigner, and vocal critic of President Paul Biya, Rebecca Enonchong, in Douala. She was held in custody for “contempt of a magistrate” until August 13, when she was released and all charges against her dropped.

Since January, seven hearings were held in the trial of three security force members accused of involvement in the killings of 21 civilians in Ngarbuh village, North-West region. The trial is being held before a military court in Yaoundé, about 380 kilometers from Ngarbuh, making it difficult for family members of victims to attend. The defendants are charged with murder, arson, destruction, violence against a pregnant woman, and disobeying orders. Seventeen members of a vigilante group and a former separatist fighter have also been charged but remain at large.

In June 2020, the French ambassador to Cameroon told the media that President Biya had assured him that an investigation would be opened into the death in custody of journalist Samuel Wazizi in August 2019. However, there has not been any progress on the investigation.

On July 26, the Special Criminal Court, which oversees cases relating to the misappropriation of public funds, adjourned for the 74th time the trial of journalist Amadou Vamoulké, arrested in 2016 for alleged embezzlement. In 2020, the United Nations Working Group on Arbitrary Detention found his detention to be arbitrary.

On September 7, a military court in Buea, South-West region, sentenced 4 people to death by firing squad for the killing of 7 children and the injuring of at least 13 others last year at a school in Kumba, South-West region. Defense lawyers said the trial was marred by serious procedural irregularities, starting with the use of military courts to try civilians, and including that the entire prosecution case was based on statements from alleged witnesses, none of whom were brought to court to be examined on their statements. In addition to those obstacles preventing the accused from being able to present a defense, there was no translation from English or French into Cameroonian Pidgin English, the language spoken by the majority of the defendants.

In an October 14 press release, the army spokesperson acknowledged the “disproportionate reaction” of a gendarme who shot and killed a 4-year-old girl on her way to school in Buea, South-West region, and said an investigation has been opened.

Discrimination against women is prevalent within Cameroonian society and incorporated in laws that subordinate women’s status to men. The civil code, which applies in Francophone regions, provides that men are the head of households (Article 213), husbands have the right to choose the place of residence (Article 215), men and women do not have equal rights to immovable property (Article 1428), and spouses do not have equal administrative authority over assets during marriage (Articles 1421 and 1428). Domestic violence is endemic. There is no legislation that specifically criminalizes domestic violence or provides for preventative measures nor measures to promote protection of survivors.

The government did not publish meaningful information about its Covid-19 spending, and many health care workers reported receiving little or no support to aid their pandemic response. The International Monetary Fund (IMF) approved two emergency loans and a multiyear program to Cameroon totaling over US$1 billion, despite the government failing to meet several of the transparency commitments in those loans.

On May 19, Cameroonian media published a summary of an audit by a Supreme Court investigative body, the Chambres des Comptes, which detailed findings of large-scale corruption and mismanagement involving 180 billion CFA ($333 million) dedicated to the Covid-19 response. It recommended “initiating 10 judicial cases regarding findings that likely violate criminal law.” Cameroonian authorities have not yet commissioned or published an independent audit of Covid-19 spending, despite promising the IMF to do so by December 31, 2020.

In January, the Vatican’s secretary of state visited Cameroon and expressed the Roman Catholic Church’s willingness to facilitate dialogue between the government and separatists.

On June 7, US Secretary of State Antony Blinken announced visa restrictions “on individuals who are believed to be responsible for, or complicit in, undermining the peaceful resolution of the crisis in the Anglophone regions of Cameroon” and condemned “human rights violations and abuses, and threats against advocates for peace or humanitarian workers.”

Although Cameroon is not formally on the agenda of the UN Security Council, council members discuss the country during periodic sessions on the work of the UN Regional Office for Central Africa (UNOCA). Human Rights Watch and other organizations have called on the council to formally add the crisis in Cameroon’s Anglophone regions to its agenda.

In November, the European Parliament adopted a resolution deploring human rights abuses in Cameroon and urging the European Union to step up action to address them. The EU repeatedly raised concerns about Cameroon at the UN Human Rights Council.