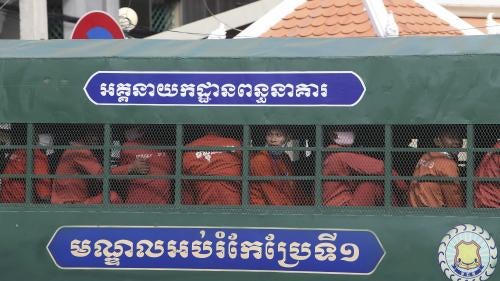 In anticipation of upcoming commune and national elections in 2022 and 2023, Prime Minister Hun Sen made use of a worsening Covid-19 pandemic to expand authoritarian control by further restricting civil and political rights and failing to protect the social and economic rights of marginalized groups. His government adopted a new, overbroad Covid-19 law, allowing for up to 20-year-prison sentences for violations of Covid-19 measures.

To silence dissent, Cambodia’s politicized courts held a series of mass trials against over 100 political opposition members and dozens of human rights defenders for exercising their rights to freedom of expression and peaceful assembly. At time of writing, Cambodia had more than 60 political prisoners behind bars.

The government’s harsh Covid-19 lockdowns were imposed without ensuring access to adequate food, medical, and other basic needs. The authorities also resorted to beating people on the streets in Phnom Penh with bamboo canes for leaving their homes in defiance of the Covid-19 edicts. The government also failed to take sufficient steps to prevent major Covid-19 outbreaks among the prison population in a penal system plagued by massive overcrowding.

The government adopted a sub-decree that tightens control of the internet and expands online surveillance of internet users critical of the government, while infringing privacy rights. Independent journalists and media outlets, as well as critical social media users, faced continued government intimidation and attacks.

The government adopted new measures that further clamp down on human rights.

In February, the authorities enacted the Sub-Decree on the Establishment of the National Internet Gateway, which, after coming into effect in February 2022, will allow the government to monitor all internet activities and grant the authorities broad powers to block and disconnect internet connections.

In March, the government followed with the rights-abusing Law on Measures to Prevent the Spread of Covid-19 and other Serious, Dangerous and Contagious Diseases. The law provides that violations of Covid-19 measures can be punished by up to 20-year prison sentences and other disproportionate penalties. The law contains overly broad provisions without independent oversight or procedural safeguards. By May, the authorities had criminally charged over 100 people with violating the law.

Other draconian laws are still awaiting finalization of drafting or adoption, such as a cybercrime bill, which poses further threats to online speech, and a draft public order law that seeks to control people’s daily lives by prohibiting a vast array of public and private actions. Cambodia has no data protection law or safeguards to ensure official requests for data are necessary and proportionate.

Human Rights Watch obtained in March a copy of a draft disability law that fails to adopt a human rights-based approach to ensure equal rights for people with disabilities. The draft law reinforces stigma against people with disabilities rather than ensuring equal access to education, employment, transportation, social and legal services, and independent living.

At time of writing, the government held at least 24 human rights defenders in jail.

In August, the authorities convicted trade union leader Rong Chhun of incitement, together with former political opposition members Sar Kanika and Ton Nimol. Their sentences ranged from 20 months to two years in prison and a large fine of 400 million riel (nearly US$100,000), which must be paid to the government’s Border Affairs Committee. Rong Chhun’s arrest followed his public comments on communities’ land loss because of the demarcation of the Cambodia-Vietnam border. The two other activists had peacefully protested for Chhun’s release. The authorities arrested nineteen activists, artists, and human rights defenders for participating in similar protests.

In August, a Phnom Penh court convicted nine activists and former opposition members of incitement and sentenced them to between 12 and 20 months in prison. They had peacefully protested near the Chinese Embassy in Phnom Penh as part of a 2020 campaign to commemorate the Paris Peace Accords anniversary.

Starting in 2020, the authorities stepped up their attempts to intimidate peaceful environmental activists, accusing them of attempting to use foreign funds to topple the government. In May 2021, a Phnom Penh court convicted five Mother Nature Cambodia (MNC) activists of incitement and sentenced them to between 18 and 20 months in prison. The activists had publicly raised concerns over the filling-in of a lake in Phnom Penh and its expected negative environmental impacts. In July, the authorities imposed additional charges of conspiracy against three of the activists.

In June, the authorities charged four other MNC activists for documenting the government’s destruction of the environment and prosecuted them on charges including conspiracy and insulting the king. Authorities detained three of them and remanded them to pre-trial detention; the fourth remained outside the country.

With upcoming elections in 2022 and 2023, harassment intensified against members of the political opposition. Many leaders and senior members of the dissolved opposition Cambodia National Rescue Party (CNRP) were forced to flee the country and remained abroad out of fear of being arrested.

After issuing court summons in November 2020, the authorities started mass trials in 2021 against over 100 persons connected with CNRP, as well as political activists. In March, the authorities convicted nine exiled CNRP leaders in absentia based on attempted “attack” charges, including CNRP leader Sam Rainsy, and sentenced them to up to 25 years in prison. The case against them is based on false allegations that the CNRP attempted to stage a coup by announcing their plans to return to Cambodia in November 2019.

The head of the CNRP, Kem Sokha, continues to face trumped-up treason charges. His three-month-long trial was interrupted in March 2020 due to Covid-19. In January 2021, the court informed him that his case was no longer a “priority” and unlikely to resume in 2021 because the authorities were pursuing new cases against hundreds of opposition members.

July 2021 marked five years since the unlawful killing of prominent political commentator and human rights defender Kem Ley. To date, there has been no credible, independent investigation into his killing in broad daylight in downtown Phnom Penh. There has also been no progress made to uncover the facts around the abduction of prominent Thai activist Wanchalearm Satsaksit. Both cases have yet to see justice, despite evidence and witness testimony pointing to likely government involvement that requires an effective and transparent investigation.

In January, Phnom Penh authorities announced a directive that seeks to ban filming, recording, and livestreaming of police actions.

In May, the Ministry of Information announced that only state media or media “invited” by the government would be permitted to report from areas under harsh Covid-19 lockdowns. Following livestreaming of long queues of Covid-19 patients outside government treatment centers, the ministry issued a letter warning journalists not to disseminate information that could “provoke turmoil in society,” and threatened legal action against those that disobeyed.

In July, Phnom Penh police questioned three journalists who covered a land protest and coerced them into signing an agreement, pledging not to report again on the land situation. These intimidatory efforts are common tactics by the authorities to silence independent voices.

Lack of Adequate Standard of Living

As a result of a rapid spike in Covid-19 cases, authorities in April introduced a color-based zoning system under which lockdown measures were imposed in areas with higher case counts. Residents in so-called “red zones,” disproportionately low-income populations, faced the most restrictive lockdown measures, including a ban on leaving their homes. For over a month, many residents were unable to work and had inadequate access to food, medicine, and other basic necessities. The authorities denied access to aid groups and United Nations agencies to distribute aid to those urgently needing it. Protesting residents were accused of being affiliated with the opposition.

Cambodia continued to strengthen its ties with China during the pandemic. While the European Union had partially suspended Cambodia’s trade preferences in August 2020 after finding systematic rights violations, bilateral trade between Cambodia and China increased by 20 percent to US$3 billion during the first quarter of 2021. Cambodia is a key “Belt and Road Initiative” partner; however, rights abuses continue to mar large-scale development projects in Cambodia.

In March, the European Parliament adopted a strongly worded resolution condemning the mass trials against opposition members as well as the intensifying clampdown on independent media and civil society, while calling for sanctions against rights-abusing Cambodian leadership. An EU statement also condemned the mass trials.

The United States, in part because of the ongoing harassment of environmental activists, announced on June 17 that it halted over $100 million in funding to the government regarding the forestry-protection “Greening Prey Lang” project.