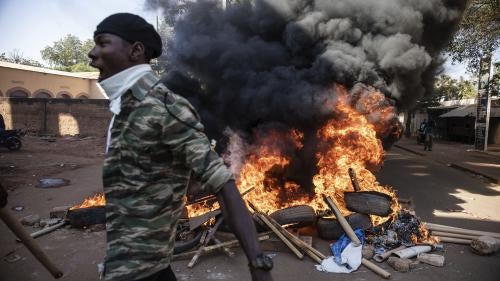 During 2021, there was a marked deterioration in Burkina Faso’s human rights and security situation as attacks and atrocities by armed Islamist groups surged, unlawful killings by state security forces and pro-government militias during counterterrorism operations continued, and the humanitarian situation worsened.

The government of President Roch Marc Kaboré, elected in November 2020 to a second term, struggled during 2021 to address the overlapping crises. The violence, including the June massacre of over 135 civilians in Solhan, the single deadliest attack in the country since the outbreak of armed conflict in 2016, led to demonstrations calling for an end to the bloodshed. Several activists and members of the political opposition were questioned or detained after criticizing the government’s response to the growing insecurity.

There was scant progress toward providing justice for the alleged killings of hundreds of suspects during past security forces operations, though a few trials of crimes by alleged Islamist fighters took place. Rule-of-law institutions remained weak; however, the government took steps to reduce the numbers of suspects in pre-trial detention.

Attacks by armed groups caused over 237,000 people to flee their homes in 2021, bringing the total number of internally displaced people since 2016 to over 1.4 million, or 6 percent of the population. The government struggled to care for the growing number of displaced.

Burkina Faso’s international partners including the European Union, France, the United Nations, and the United States readily denounced abuses by Islamist armed groups but were largely reluctant to denounce or push for investigations into those by pro-government forces.

Islamist armed groups allied with Al-Qaeda and the Islamic State (ISIS) in the Greater Sahara killed over 350 civilians. Their presence and attacks on military targets and civilians expanded from Burkina Faso’s north and east into the south and west. Their attacks largely targeted communities which had formed local civil defense groups.

On November 1, armed Islamists killed around 10 civilians from Dambam village on their way to a local market near the border with Niger. On August 18, armed Islamists ambushed a convoy of traders near Arbinda, northern Burkina Faso, killing 59 civilians and numerous pro-government security force members. On June 4 and 5, they killed at least 137 civilians during an attack on Solhan village, in northern Burkina Faso.

On May 3, armed Islamist fighters killed 30 villagers during an attack on Kodyel village. On April 26, they ambushed an anti-poaching patrol, killing two Spanish journalists and an Irish conservationist. During a separate attack the same day, armed Islamists killed 18 villagers in the northern village of Yattakou. Between February and May, they killed at least 30 civilians in northern Oudalan Province, including traders on their way to a market in February, and 15 during a baptism in May.

Throughout 2021, armed Islamist groups abducted scores of civilians from villages, public vehicles, and displacement camps. Victims included religious and health workers, village chiefs, traders, and displaced people. Many of the abducted, including a priest, were later killed, while at least 27 villagers abducted from public vehicles between the towns of Dablo and Barsalogho in June and July were unaccounted for at time of writing.

Islamist group fighters also burned villages, markets, and businesses; abducted and raped dozens of women; imposed their version of Sharia (Islamic law) via courts that did not adhere to international fair trial standards; and prevented farmers from accessing their fields.

There were several allegations of extrajudicial executions of suspects by the Burkinabé security forces during counterterrorism operations, most targeting ethnic Peuhl. However, the number of unlawful killings was lower compared to 2019 and 2020.

In response to the growing number of Islamist armed attacks, the president removed the defense minister after a cabinet reshuffle and by decree created a special force to fight terrorism whereby special force members “may not be prosecuted for acts committed in the exercise of their functions.”

State-sponsored self-defense groups, notably the Volunteers for the Defense of the Homeland (VDP), created in 2020, were implicated in numerous grave crimes including arbitrary detentions, torture, and unlawful killings targeting suspected armed Islamists and criminals.

Some allegations involved the VDPs and security forces working together, including the alleged killing in mid-September of six men, including a university student, and the enforced disappearance of five others during a joint operation in the western Cascades region.

There was little progress with investigations into past atrocities by the security services–notably the 2018 and 2019 killings of scores of suspects in Burkina Faso’s Sahel region; the deaths of over 200 men in Djibo in 2020; and the deaths of 12 men in gendarme custody in Tanwalbougou.

The military justice directorate, mandated to investigate incidents involving the security forces, continued to be underfunded.

The high-security prison for terrorism-related offenses remained overcrowded – with about 876 people detained in a prison made for 448, at time of writing. The vast majority had been detained far beyond the legal limit. The government took steps to address the backlog and to ensure due process by releasing scores of suspects accused of terrorism-related offenses against whom there was insufficient evidence and by beginning trials. Very few detainees had access to defense lawyers.

A court dedicated to terrorism-related offenses was established and started to hear cases in mid-2021. One trial, in August, led to the conviction of two members of the Islamist armed group Ansaroul Islam for a 2018 attack on a primary school; however, the proceeding raised due process concerns, including that defendants were not informed of their legal right to counsel.

The long-awaited trial of those implicated in the 1987 assassination of President Thomas Sankara and 12 others began on October 11. The 14 men standing trial include former President Blaise Compaoré, who fled to Côte d’Ivoire in 2014 after being ousted in a popular uprising. He and several others will be tried in absentia. In July, France approved an extradition request from Burkina Faso for François Compaoré, brother of the former president, for his alleged involvement in the 1998 murder of prominent investigative journalist Norbert Zongo.

Children’s Rights and Attacks on Education

Armed groups, notably armed Islamists, increased their recruitment and use of children. At least 15 children were among those detained in the high security prison. Over 300,000 children were out of school due to the closure of 2,244 schools as a result of insecurity as of May, approximately 10 percent of the country's schools, according to the United Nations Children’s Fund (UNICEF.) During 2021, at least 30 education-related attacks by Islamist armed groups, including damaging or pillaging schools and abducting, detaining, or threatening teachers, were documented by Human Rights Watch or reported by Burkina Faso’s Education Ministry or the Armed Conflict Location and Event Data (ACLED) Project.

Donors, notably France, the Netherlands, the UN, and the US, supported programs to improve the justice sector, address prison overcrowding and extended pretrial detention of terrorism suspects, and provide human rights training for the security forces.

In October, the UN Office of the High Commissioner for Human Rights signed an agreement to open a country office mandated to monitor the conduct of security force operations during G5 Sahel operations and, more widely, to support the national human rights commission and civil society.

The US provided US$2 million in training programs to counter improvised explosive devices (IEDs), as well as $5 million in counterterrorism funding to develop the law enforcement capacity to investigate complex terrorism cases. As of July, the US had committed $69 million to Burkina Faso's humanitarian assistance, health, peace and security, program support, and economic development sectors.

The EU provided €188.6 million in humanitarian assistance to the Sahel and €4.5 billion in support for the G5 Sahel joint counterterrorism force, including for the human rights due diligence framework, which presses governments to ensure their forces respect human rights during operations.

France, Burkina Faso’s leading bilateral donor, provides military training to Burkinabé troops and supported security operations in the Sahel region through its 5,100-strong Operation Barkhane counterinsurgency operation, which is set to draw down in 2022.

In response to the gravity and number of attacks on schools and the killing and maiming of children, the UN secretary-general included Burkina Faso as a situation of concern for the UN's monitoring and reporting mechanism on grave violations against children during armed conflict.

A previous version of the caption incorrectly stated that the photo subject was a member of the security forces. The caption has been adjusted to reflect that the person walking in front of the fire was a protester.