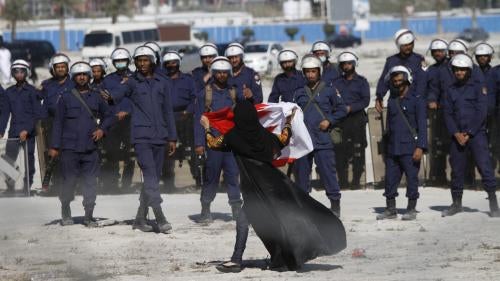 Bahraini activists commemorated the 10th anniversary of the 2011 uprising in Bahrain amid continuing heavy repression. Since 2017, Bahraini authorities have banned all independent media in the country and dissolved all significant opposition groups. Authorities failed to hold officials accountable for torture and ill-treatment. Oversight mechanisms are not independent of the government.

Three detainees died in Bahraini prisons in 2021 amid allegations of medical negligence. Health and hygiene conditions in Bahrain’s overcrowded prisons remain serious, leading to two major Covid-19 outbreaks. Prison authorities violently suppressed a peaceful sit-in at the Jau Prison, and security forces summoned for interrogation and arrested individuals who participated in protests calling for the release of their family members from detention.

There are 26 individuals currently on death row, all at imminent risk of execution. The government has put six people to death since it ended a moratorium on executions in 2017, most recently in 2019.

Bahrain continued to deny access to independent rights monitors and the United Nations special procedures, including the special rapporteur on torture.

Bahrain further restricted online content by amending the Press Law to require that news and broadcasting sites register and obtain Ministry of Information Affairs approval, and to ban electronic media from publishing content that conflicts with “national interest” or the constitution.

Between June 2020 and May 2021, at least 58 people were arrested, detained, or prosecuted for their online activities, Freedom House reported.

In July 2021, it was reported that Bahrain, already believed to be a customer of the NSO Group’s Pegasus spyware had entered phone numbers of potential targets into a database, which was leaked. In August 2021, Citizen Lab reported that the iPhones of nine Bahraini activists were successfully hacked with NSO Group’s Pegasus spyware between June 2020 and February 2021. NSO Group has repeatedly denied the news reports.

Thirteen prominent dissidents have been serving lengthy prison terms since their arrest in 2011 for their roles in pro-democracy demonstrations. They include Abdulhadi al-Khawaja, a founder of the Bahrain Center for Human Rights, as well as Hassan Mushaima and Abduljalil al-Singace, leaders of the opposition group Al Haq; all are serving life terms.

Al-Singace began a hunger strike on July 8 to protest inhumane prison conditions and to demand that a book that he wrote in prison, and which prison authorities confiscated, be returned to his family. Between July and September, al-Singace lost nearly 20 kilograms and is suffering from pre-existing medical conditions, his family says, for which he has not received adequate treatment.

Shaikh Ali Salman, leader of Al-Wifaq, Bahrain’s largest but now forcibly dissolved opposition political society, is also serving a life term after the Court of Cassation upheld his sentence in January 2019 on trumped up charges of allegedly spying for Qatar.

In June 2020, authorities released from prison prominent human rights defender Nabeel Rajab to serve the rest of his 5-year sentence for speech offenses under the 2017 alternative sentencing law.

No independent media have operated in Bahrain since the Information Affairs Ministry suspended Al Wasat, the country’s only independent newspaper, in 2017. Foreign journalists rarely have access to Bahrain, and Human Rights Watch and other rights groups are routinely denied access.

The Bahrain Institute for Rights and Democracy (BIRD) and Reprieve found that since the 2011 uprising, 51 people have been sentenced to death. Of those, 26 individuals are currently on death row, all at imminent risk of execution, having exhausted all legal remedies. In July 2020, the Court of Cassation upheld the death sentences of Mohamed Ramadan and Hussein Ali Moosa, despite unfair trials and credible evidence that their convictions were based on confessions coerced under torture.

According to BIRD and Reprieve, of the 51 people sentenced to death since 2011, at least 31 were convicted under Bahrain’s overbroad terrorism law, and of those, 20 alleged torture.

Bahrain has executed six men since it ended a moratorium in 2017 on use of the death penalty.

At least three prisoners died during 2021, allegedly from the lack of adequate medical care.

On April 6, the Police Media Center announced that Abbas Malallah died of a heart attack, but Malallah’s family claimed that during his 10 years in prison he had been suffering from chronic illnesses, and other prisoners told Bahraini rights groups that the Jau prison authorities did not respond to Malallah’s pleas for medical attention before he lost consciousness.

Malallah’s death prompted protests in Bahrain, including an April 17 sit-in in Jau Prison protesting the prison authorities’ medical negligence, particularly during the Covid-19 pandemic. According to a Bahraini human rights activist, the authorities summoned at least 10 protesters for interrogation on April 6, and detained family members of several prominent political prisoners. The UN high commissioner for human rights expressed concern that security forces used “unnecessary and disproportionate force” to dismantle the peaceful sit-in at the prison on April 17 and reportedly held many prisoners incommunicado.

In an apparent response to the Covid-19 pandemic, the Public Prosecution announced on April 8 the release of 73 detainees under the alternative sentencing law. A Covid-19 outbreak at Jau Prison, which is notoriously crowded, led to the death of Husein Barakat on June 9. Bahrain’s Interior Ministry has not released accurate information on the number of infections, but rights groups said scores of detainees had contracted Covid-19 and that detainees were not provided with personal protective equipment, adequate medical care, or the ability to communicate with their families.

On July 25, Hasan Abdulnabi, who suffered from sickle cell disease, died amid allegations that he was denied adequate medical treatment at the Dry Dock Detention Center.

Authorities have failed to credibly investigate and prosecute officials and police officers who allegedly committed serious violations, including torture, since the 2011 protests.

Police beat children arrested in protest-related cases in early February 2021, in the lead up to the 10th anniversary of the uprising in Bahrain, and threatened them with rape and electric shocks. Prosecutors and judges, who refused to allow the children’s parents or lawyers to be present during their interrogations and ordered their detention, enabled the abuses. A government report denied that security forces beat, insulted, or threatened to rape the boys.

In a positive development, on February 14, King Hamad bin Isa Al Khalifa approved Law No. 4/2021 on Child Restorative Justice and Protection from Abuse, which raises the age of criminal responsibility from 7 to 15, defines a child as anyone under 18, and provides for special child courts and separate detention facilities for children.

In 2019, King Hamad reinstated the citizenship of 551 individuals and courts restored the nationality of another 147 individuals. Bahrain amended its citizenship revocation laws in 2019, restricting the power to strip nationality to the cabinet. The king and the judiciary no longer have the power to unilaterally strip Bahrainis of their citizenship for national security or terrorism crimes. Citizenship revocations since 2012 had been handed down by the courts, or by royal decree, or by order of the Interior Ministry. Almost 300 persons whom the authorities had stripped of their citizenship in recent years remained without Bahraini nationality, rendering most of them stateless.

Abuses against migrant workers, especially migrant domestic workers, worsened during the Covid-19 pandemic. In 2020, the authorities paid the salaries of 100,000 citizens working in the private sector between April and June but did not provide similar benefits to migrant workers who comprise most of Bahrain’s workforce. Migrant workers reported facing dismissal, reduced or unpaid wages, and evictions from their accommodation.

In 2017, Bahrain introduced a unified standard contract for domestic workers which requires detailing the nature of the job, rest hours, and days off. But the standard contract does not limit working hours, set out the minimum wage or specify what rest days workers are entitled to.

Bahraini family laws discriminate against women’s right to divorce and inherit. Article 353 of the penal code exempts perpetrators of rape from prosecution if they marry their victims. Bahrain’s parliament proposed to repeal that article in 2016, but the cabinet rejected the proposal. Article 334 of the penal code reduces the penalties for perpetrators of so-called honor crimes.

In August, women launched a campaign with the Arabic hashtag “Citizenship is My Right and My Children’s” to demand the right to transmit Bahraini nationality to their children on an equal basis to men.

Bahrain’s penal code criminalizes adultery and sexual relations outside marriage, a violation of the right to privacy which disproportionately harms women and migrant women. Women who are pregnant outside marriage, as well as women who report rape, can find themselves prosecuted for consensual extramarital sex. Although no law explicitly criminalizes same-sex relations, authorities have used vague penal code provisions against “indecency” and “immorality” to target sexual and gender minorities.

In December 2018, Bahrain amended its labor law to ban discrimination based on sex, origin, language or creed, and sexual harassment in the workplace, but the law does not refer to sexual orientation, gender identity, disability, or age.

Bahrain continued to participate in Yemen military operations as part of the Saudi Arabia-led coalition, which is responsible for serious laws of war violations.

The US maintains a major naval base in Bahrain. The State Department reported in June that the US had active arms sales cases with Bahrain worth more than US$6 billion under the Foreign Military Sales (FMS) program. The United States thanked Bahrain for helping evacuate Afghans after the Taliban took over the country. In August, the Bahraini government allowed evacuation flights from Afghanistan to land at its airport.

On March 24, 22 human rights groups and unions and 57 British members of parliament urged Formula One to conduct an independent inquiry into allegations of human rights abuses associated with the Bahrain Grand Prix, which Bahrain has hosted since 2004.

In March, the European Parliament adopted a resolution deploring Bahrain’s human rights abuses and urging the EU to take a more resolute approach, which is yet to materialize. In April, on the 60th birthday of dual Bahraini-EU jailed human rights defender Abdulhadi al-Khawaja, the EU special representative for human rights reiterated a call for his release.