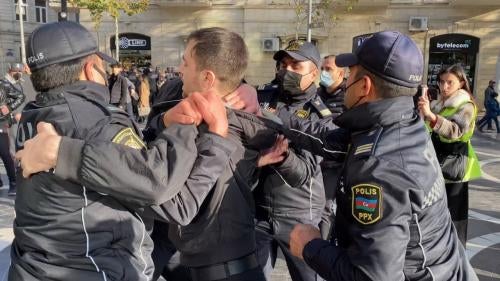 The 2020 truce ending the six-week war between Armenia and Azerbaijan in and around Nagorno-Karabakh largely held, but periodic skirmishes made for a fragile situation on the post-war front lines.

The ceasefire enabled the start of reconstruction in areas where Azerbaijan re-established control. In areas under the control of de-facto Nagorno Karabakh authorities, ethnic Armenians face risk of injury or captivity when they travel, tend to livestock, or engage in farming near the front lines. These and other issues, including Nagorno-Karabakh’s long-term status, perpetuated tensions and pointed to the need for greater international involvement.

In March, the government released, under a presidential pardon, nearly 40 opposition activists, religious believers, journalists, human rights defenders, and other perceived critics imprisoned on politically motivated charges. But dozens of others remained wrongfully imprisoned, while authorities targeted critics and other dissenting voices.

In the period since the war’s start, tensions between the government and political opposition declined. However, the government remained hostile to dissenting voices. Restrictive laws continued to prevent nongovernmental organizations (NGOs) from operating independently. Reports of torture and ill-treatment persisted throughout the year.

In August, the Prosecutor General's Office said that since the ceasefire, 23 Azerbaijani civilians were killed and 36 were injured by anti-personnel and anti-vehicle mines laid in areas that had previously been under Armenian forces’ control. Among them were two Azerbaijani journalists and a local official, who were killed on June 4. Landmine contamination in all of the seven regained regions around Nagorno Karabakh is reported to be extensive (See Armenia chapter). Neither Azerbaijan nor Armenia has ratified the international treaty prohibiting anti-personnel landmines.

The fighting compounded the loss of education due to Covid-19-related school closures. According to official data, at least 71 schools were damaged or destroyed on the Armenian side and 54 on the Azerbaijani side. Despite the severe damage to schools during the conflict, Azerbaijan had yet to endorse the Safe Schools Declaration, an international agreement to protect education during armed conflict signed by 112 countries.

Azerbaijani forces subjected numerous Armenian POWs to physical abuse and acts of humiliation. Human Rights Watch also documented torture and other abuse by Azerbaijani forces against Armenian civilians, including against older people, as well as a case of extrajudicial execution in early 2021. Allegations of at least a dozen other extrajudicial executions of Armenian troops and civilians in 2020 and early 2021 also came to light. (See Armenia chapter for allegations of torture and executions of Azerbaijani troops by Armenian/Nagorno-Karabakh forces).

In 2021, Azerbaijan returned more than 100 Armenian POWs and civilian detainees. In September, the Armenian ombudsman’s office stated that at least 41 POWs and four civilian captives remained in Azerbaijani custody; the exact number remaining in custody is unclear. The Azerbaijani government refuses to acknowledge any of these detainees as POWs.

Although Azerbaijani authorities consistently claimed that all remaining Armenian soldiers in custody were terrorism suspects, they dropped terrorism charges during the trials against several dozen and convicted them for illegal border crossing and weapons possession. Many were among the 30 whom Azerbaijan released in June and July in exchange for landmine maps.

Azerbaijani courts have also sentenced at least six ethnic Armenians, some of whom are reportedly civilians, on a variety of other charges. The charges include terrorism, espionage, and, in two cases, torturing Azerbaijani citizens during the Karabakh war of the 1990s.

In December 2020, several international media outlets reported that Azerbaijani authorities arrested four servicemen for desecrating the bodies of dead Armenian soldiers and vandalizing gravestones at Armenian cemeteries. At time of writing, they remained in pretrial detention, and no other Azerbaijani forces have been held accountable for crimes during the war.

In January, Popular Front Party of Azerbaijan (APFP) member Niyameddin Ahmedov faced new, dubious charges of incitement and trafficking in banned items. Ahmedov has been in custody since his May 2020 arrest on financing terrorism charges, which stem from allegations that he received funds from an exiled government critic to destabilize the country and assassinate political figures. Police allegedly beat Ahmedov in custody in an attempt to coerce him to falsely testify against an APFP leader. Ahmedov denies all charges. In October, a court sentenced him to 13 years in prison.

In April, a court sentenced Said Mamedzade Bakuvi, an APFP activist, to three-and-a-half years in prison on bogus hooliganism charges, but in June substituted the penalty with a suspended sentence and released him.

In March, President Ilham Aliyev pardoned APFP member Mahammad Imanli, who had been sentenced in December 2020 to one year in prison on false criminal charges of spreading Covid-19.

Also in March, police arrested Lachin Valiyev, an opposition activist, on bogus drugs-related charges and allegedly coerced him to give incriminating statements against the APFP leadership. Valiyev confessed the drug charges under apparent duress. He remained in pretrial custody at time of writing.

In July, an appeals court replaced the house arrest of Tofig Yagublu, a leading politician of the opposition Musavat party, with a 30-month conditional sentence. Yagublu had been under house arrest due to health complications arising from his hunger strike to protest his unjust 2020 conviction on bogus hooliganism charges, for which he had been sentenced to four years and three months in prison.

In May, the Azerbaijani Bar Association, which is seen as closely tied to the government, reinstated lawyers Shahla Humbatova and Irada Javadova, who had been disbarred in previous years in apparent retaliation for their work on politically sensitive cases.

In March, a court sentenced blogger Elchin Hasanzade and activist Ibrahim Salamov to eight months in prison on defamation charges, for corruption and other allegations they made against the head of Mingechevir city’s housing and maintenance department. They were released in November.

In February, an appeals court upheld a lower court’s spurious high treason verdict against journalist Polad Aslanov, for which he continues to serve a 16-year prison sentence.

In July, a report by the Organized Crime and Corruption Reporting Project (OCCRP) alleged Azerbaijan has been spying on over a thousand independent activists and journalists, using Pegasus surveillance software that gave the government access to their phones. Investigative journalist Khadija Ismayilova and blogger Mehman Huseynov were among those reportedly targeted.

Gender-based violence remained pervasive but underreported. Serious gaps continued in the official response including lack of protection and recourse for survivors.

Restrictions related to Covid-19 additionally led to a surge in domestic violence, and shelter managers said they saw increases in the numbers of women seeking shelter. Womens’ rights activists reported police failure to register or respond to reports of domestic violence, and significant barriers to accessing the few available shelters.

In what appears to be a growing crisis of murders of women by their partners or relatives, victims were often unable to escape abuse due to lack of shelter space and inadequate police response. In July alone, journalists reported that five women were murdered by their partners. In August, Azerbaijan’s General Prosecutor’s Office released data showing that in the first half of 2021, 33 women in the country had been killed; women’s rights researchers said that most were killed by their husbands, partners, or family members. The prosecutor’s office publicly encouraged women to use a government hotline to report violence.

On March 8, Baku police briefly detained activists to prevent them from holding an International Women’s Day march to protest gender-based violence and to call on the government to ratify the Council of Europe’s Convention on the Prevention of Violence against Women and Domestic Violence.

Torture and Ill-Treatment in Detention

Authorities typically dismissed complaints of torture and other ill-treatment in custody, and the practice continued with impunity. Ill-treatment is rampant in police custody, allegedly to coerce confessions, while denying detainees access to family, independent lawyers, or independent medical care.

Throughout 2021, details emerged supporting allegations that in 2017, military and security officials tortured detainees to extract confessions and other testimony on treason charges. Most of the arrests took place in Tatar region, against military personnel. The World Organization Against Torture (OMCT), stated that at least 78 were detained, and 25 sentenced to between 12 and 20 years in prison, in closed trials, “with multiple cases of torture.” At least five of the detainees died within days of their arrest in May 2020.

In August, a court sentenced Yunis Safarov, accused of an attempt on the life of the Ganja city mayor, to life imprisonment. Courts sentenced nine other defendants in this case to prison terms from 18 to 20 years. Safarov and all the defendants testified in court that police had beat them repeatedly to elicit confessions and testimony. No effective investigations followed the allegations.

In February, a group of United Nations human rights special procedures mandate holders called on Armenia and Azerbaijan to investigate “allegations of serious human rights violations committed during the [Nagorno-Karabakh] conflict and its aftermath in order to hold perpetrators to account and provide redress to the victims.” The UN human rights experts called for the release of prisoners of war (POWs) captured in the conflict and for the return of bodies to families for burial.

In May, the European Parliament adopted a resolution calling on Azerbaijan to unconditionally release Armenian POWs and ensure their access to lawyers, doctors and human rights defenders. It also urged Azerbaijan to cooperate with the European Court of Human Rights (ECtHR) in investigating reports about inhuman treatment of POWs.

In April, Council of Europe Human Rights Commissioner, Dunja Mijatovic, expressed concern at “dehumanising scenes, including wax mannequins depicting dead and dying Armenians soldiers” that are included in displays at the Trophy Park, dedicated to Azerbaijan’s victory in the Nagorno-Karbakh war. Mijatovic said “I consider such images highly disturbing and humiliating.” In October, Azerbaijan removed the displays of wax mannequins and the helmets of soldiers seized during the war.

A September resolution by the Parliamentary Assembly of the Council of Europe (PACE) called on Azerbaijani authorities to free all remaining captives and urged Armenian authorities to release all mine maps. It also called on the sides to ensure accountability for the crimes committed during the war.

In March, the US government welcomed the presidential pardon, and called on the government to release everyone “considered to have been incarcerated for exercising their fundamental freedoms.” Also in March, US Secretary of State Anthony Blinken called for reinstatement of Humbatova to the Bar Association.

In May, following its human rights dialogue with Azerbaijan, the European Union welcomed the reinstatement of Humbatova and Javadova and highlighted the importance of accountability for violations of international humanitarian law. The EU repeatedly called for Azerbaijan to release all “prisoners and detainees” captured in the Nagorno-Karabakh conflict.

In a separate statement, the PACE Legal Affairs Committee expressed “particular disappointment” at the failure by the Azerbaijani delegation to the Assembly to co-operate with the rapporteur on political prisoners as well as the Azerbaijani authorities’ continuing failure to implement fully European Court judgments.

In August, reacting to the spike in killings of women by their families in July, the British Embassy in Azerbaijan expressed concern over the killing of Azerbaijani women, and called on the Azerbaijani government to sign the Istanbul Convention.