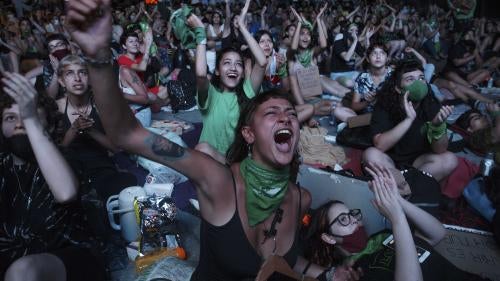 Longstanding human rights problems in Argentina include police abuse, poor prison conditions, and endemic violence against women. In December 2020, Congress passed a landmark bill to legalize abortion up to the fourteenth week of pregnancy, ending a nearly century-old exception model that put the life and health of women at risk. However, implementation remains a challenge.

Some government-promoted proposed legal reforms to the justice system and the Attorney General's Office pose a risk to their independence. Delays in appointing permanent judges, likewise, undermine the justice system. Impunity for the 1994 bombing of the AMIA Jewish center in Buenos Aires continues to be a concern.

A legislative election in November, which the opposition won, has modified the Senate’s composition, making it harder for the government coalition to pass laws without a meaningful debate.

Pardons and amnesty laws shielding officials implicated in the 1976-1983 dictatorship’s crimes were annulled by the Supreme Court and federal judges in the early 2000s. As of June 2021, the Attorney General’s Office reported 3,493 people charged, 1,030 convicted, and 159 acquitted. Of 631 investigations into crimes against humanity, judges had issued rulings in 256.

As of August 2021, 130 people illegally taken from their parents as children during the dictatorship had been identified and many had been reunited with their families, according to the Abuelas de Plaza de Mayo, a human rights group.

The large number of victims, suspects, and cases of alleged crimes of the dictatorship makes it difficult for prosecutors and judges to bring those responsible to justice.

The fate of Jorge Julio López, a torture victim who disappeared in 2006—a day before he was due to attend the trial of one of his torturers—remains unknown.

Almost half of the 11,290 detainees in federal prisons have not been convicted of a crime but are awaiting trial, the government reports. Hundreds of people were conditionally released by judicial decisions in 2020 to prevent the spread of the virus that causes Covid-19, but no meaningful reform has been undertaken to address pretrial detention.

The Ombudsperson’s Office reported abuses by security forces enforcing the lockdown established to prevent the spread of Covid-19. Prosecutors continued to investigate the killing and possible enforced disappearance of Facundo Astudillo Castro and Luis Espinosa, two young men who went missing in the context of the national lockdown in 2020 and were later found dead.

Authorities in Argentina’s northern province of Formosa employed abusive and unsanitary measures to prevent the spread of the novel coronavirus, including holding people in “isolation” and “quarantine” centers in circumstances that amounted to arbitrary detention. Authorities limited journalists’ ability to report on the situation, allegedly used excessive force against people who protested the Covid-19 regulations, and arrested and brought criminal charges against some.

In February, a federal judge opened a criminal investigation against a former director and deputy director of Argentina’s Federal Intelligence Agency for leading a conspiracy for the illegal surveillance of journalists, union members, and politicians under the administration of former President Mauricio Macri.

High level authorities, including President Alberto Fernández, have used hostile rhetoric against independent journalists, accusing them of spreading “fake news” when reporting on issues of public interest, such as irregularities in the distribution of Covid-19 vaccines.

A 2016 law created a national agency to ensure public access to government information and protect personal data. From 2017 to August 2021, individuals had filed 20,660 information requests. Authorities responded to most within a month, the legal deadline. As of August 2021, citizens had filed 1,220 appeals, in most cases after authorities had failed to respond by the deadline.

The Fernández administration has been attempting to overhaul the country’s judiciary.

A “council of experts” appointed by President Fernández in August 2020 to propose reforms to the Magistrate’s Council, the Supreme Court, and the Attorney General’s Office presented its report in December 2020. Recommendations included modifying the Magistrate’s Council’s structure and establishing a term limit for the attorney general, currently a lifetime appointment. Some of the 11 experts on the council had ties to officials under investigation, including the lawyer of Vice President Cristina Fernández de Kirchner, whose position grants her immunity from arrest on multiple corruption charges.

In September 2020, the Senate passed a government-promoted bill creating dozens of new criminal courts to be staffed by temporary judges (pending appointment of tenured judges). Previously, delays in appointing tenured judges often left temporary judges in place for years. The Supreme Court ruled in 2015 that this undermined judicial independence. As of September 2021, 239 federal and national judgeships remained vacant.

In November 2020, the Senate passed another government-promoted bill reducing the legislative majority needed to appoint an attorney general and establishing a term limit, in line with the council’s recommendation.

The House of Representatives had not discussed either bill at time of writing.

The Ombudsperson’s Office, which is structurally independent from the executive and has powers to document and investigate acts by the national government, remains vacant. The office has not operated normally since 2013, when the mandate of the then-deputy ombudsperson expired. Congress has failed to appoint an ombudsperson since 2009. The office’s performance and ability to protect rights has been limited.

Twenty-seven years after the bombing of the Argentine Israelite Mutual Association (AMIA) in Buenos Aires that killed 85 people and injured more than 300, court battles continue and no one has been convicted. Argentine prosecutors have alleged it was carried out by Iranian suspects.

In January 2015, Alberto Nisman, the investigating prosecutor at that time, was found dead with a gunshot wound to the head and a pistol beside him; he had accused then-President Cristina Fernández de Kirchner of covering up Iran’s role in the attack. In June 2018, an appeals court said Nisman’s death appeared to be a murder. As of September 2021, no one had been convicted in connection with his death.

In February 2019, a court acquitted former President Carlos Menem of interference in the initial investigation into the bombing but convicted a former head of intelligence and a judge. An appeal of the judge’s conviction remained pending as of September 2021.

Indigenous people face obstacles accessing justice, land, education, health care, and basic services. Argentina has repeatedly failed to implement laws protecting Indigenous peoples’ right under international law to free, prior, and informed consent to government and business decisions that may affect their rights. Debates on a national law on Indigenous communal ownership of traditional lands, which the Argentine Constitution protects, are continually postponed.

At least 357,000 children—and up to 694,000—discontinued their schooling during 2020 in Argentina, UNICEF reported. Due to Covid-19 related restrictions, most schools were closed between March and December 2020 and for shorter periods in some parts of the country in 2021, when a gradual return to classes took place. The impact was greatest on low-income families, UNICEF said, and around 20 percent of those who dropped out in 2020 were still without schooling in May 2021.

In December 2020, Argentina’s Congress passed a landmark bill to legalize abortion up to the 14th week of pregnancy. The law also allows termination of pregnancies after that term in cases of rape or when the life or health of the pregnant person is at risk. However, there are reports of obstacles to access legal abortion, including lack of access to information about the law, improper use of conscientious objection by healthcare professionals, and undue delays. Women with disabilities who are under court orders specifically restricting their legal capacity in connection with the exercise of their reproductive rights, or who have been declared legally incompetent, are required to have assistance from their legal representative or relative to consent to abortions, which creates obstacles for their exercise of this right.

Also in December, Congress approved a separate law to provide support to pregnant people and their children for the first 1,000 days of the child’s life.

Despite a 2009 law detailing comprehensive measures to prevent and prosecute violence against women, their unpunished killing remains a serious concern. The latest available data from the National Registry of Femicides, administered by the Supreme Court, reported 251 femicides—the murder of women based on their gender—and only four convictions, in 2020.

In 2012, Argentina passed a Gender Identity Law allowing anyone to change their gender and name on identity cards and birth certificates through a simple administrative procedure.

In July 2021, President Fernández recognized non-binary identities, enabling citizens and non-national residents to choose a third gender category, “X” (neither male or female), on identity cards and passports. Argentina is the first country in Latin America to establish such a category.

In 2018, the International Monetary Fund (IMF) and the Macri administration agreed on a US$57 billion loan. At time of writing, the Fernández administration was re-negotiating the IMF loan amid a deep economic crisis that predates the pandemic and was deepened by it. The crisis has severely impacted people living in poverty, who according to government statistics amount to 40 percent of the population.

As a member of the United Nations Human Rights Council, Argentina has supported UN scrutiny of rights violations in Belarus, Ethiopia, Eritrea, Nicaragua, and Venezuela. In October 2021, Argentina was re-elected for the 2022-2024 term.

However, Argentina’s foreign policy towards Venezuela and Nicaragua has been inconsistent. It abstained from an Organization of American States (OAS) resolution rejecting Venezuela’s December 2020 elections, which are widely considered to have been fraudulent. It also abstained, in June and October 2021, from OAS resolutions condemning arrests of Nicaraguan presidential opposition candidates and critics. Argentina and Mexico, which also abstained in both opportunities, issued a statement justifying their June decision under the principle of non-intervention in the internal affairs of states.

In November 2021, Argentina voted in favor of an OAS resolution that condemned Nicaragua’s presidential elections saying the elections “were not free, fair or transparent, and lack democratic legitimacy.”

In 2021, Argentina withdrew from the Lima Group, a coalition of governments monitoring Venezuela’s poor human rights record, and from a 2018 request to the Prosecutor’s Office of the International Criminal Court—made together with Canada, Colombia, Chile, Paraguay, and Peru—for an investigation into possible crimes against humanity committed in Venezuela.

While Argentina rightfully condemned repression against protesters by the Colombian police, it failed to criticize abuses against demonstrators in Cuba.

Argentina hosted a virtual summit on climate change in September 2021 with representatives from Latin American and Caribbean countries, the US special envoy on climate change, and the UN secretary-general.

In September 2020, two Argentine girls were killed in neighboring Paraguay during an operation by members of a military-led elite unit against Paraguay’s main guerrilla group. Serious deficiencies and irregularities marred Paraguay’s investigation, and in October 2021, Argentina and Paraguay agreed to establish an expert international forensic team to work on the case.

In June 2020 and September 2021, Argentina informed the UN secretary-general that it was temporarily derogating some of its obligations under the International Covenant on Civil and Political Rights to address the Covid-19 pandemic.