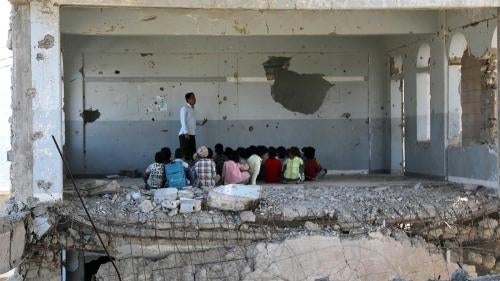 The armed conflict in Yemen has resulted in the largest humanitarian crisis in the world; parties to the conflict have killed and injured thousands of Yemeni civilians. According to the Yemen Data Project, more than 17,500 civilians were killed and injured since 2015, and a quarter of all civilians killed in air raids were women and children. More than 20 million people in Yemen are experiencing food insecurity; 10 million of them are at risk of famine.

Since March 2015, Saudi Arabia and the United Arab Emirates (UAE) have led a coalition of states in Yemen against Houthi forces that, in alliance with former Yemeni President Ali Abdullah Saleh, took over Yemen’s capital, Sanaa, in September 2014.

Over the past year, these alliances have fractured. Houthi forces, which still control much of northern and central Yemen, killed Saleh after clashes in December 2017. In southern Yemen, Saudi Arabia and the UAE have backed rival Yemeni groups—the Saudi-supported Yemeni government led by President Abdu Rabbu Mansour Hadi and the UAE-backed Southern Transitional Council (STC).

In August 2019, clashes occurred between Yemeni government and STC forces, with the UAE carrying out airstrikes in support of the STC. Across the country, civilians suffer from a lack of basic services, a spiraling economic crisis, abusive local security forces, and broken governance, health, education, and judicial systems.

Yemen’s economy, already fragile prior to the conflict, has been gravely affected. Hundreds of thousands of families no longer have a steady source of income, and many public servants have not received a regular salary in several years. The country’s broken economy has worsened the humanitarian crisis.

Since March 2015, the coalition has conducted numerous indiscriminate and disproportionate airstrikes killing thousands of civilians and hitting civilian structures in violation of the laws of war, using munitions sold by the United States, United Kingdom, and others. Houthi forces have used banned antipersonnel landmines, recruited children, and fired artillery indiscriminately into cities such as Taizz, killing and wounding civilians, and launched indiscriminate ballistic missiles into Saudi Arabia.

Human Rights Watch has documented at least 90 apparently unlawful Saudi-led coalition airstrikes, including deadly attacks on Yemeni fishing boats that have killed dozens and appeared to be deliberate attacks on civilians and civilian objects in violation of the laws of war. At time of writing, according to the Yemen Data Project, the Saudi-led coalition has conducted more than 20,100 airstrikes on Yemen since the war began, an average of 12 attacks a day. The coalition has bombed hospitals, school buses, markets, mosques, farms, bridges, factories, and detention centers.

In August 2019, the Saudi-led coalition carried out multiple airstrikes on a Houthi detention center, killing and wounding at least 200 people. The attack was the single deadliest attack since the war began in 2015. Human Rights Watch has documented at least five deadly attacks by Saudi-led coalition naval forces on Yemeni fishing boats since 2018, killing at least 47 Yemeni fishermen, including seven children.

Houthi forces have repeatedly fired artillery indiscriminately into Yemeni cities such as Taizz and Hodeida, as well as launched indiscriminate ballistic missiles into Saudi Arabia, including Riyadh’s international airport. Some of these attacks may amount to war crimes.

Since September 2014, all parties to the conflict have used child soldiers under 18, including some under the age of 15, according to a 2019 UN Group of Eminent International and Regional Experts on Yemen report in 2019. According to the secretary general, out of 3,034 children recruited throughout the war in Yemen, 1,940—64 percent—were recruited by the Houthis.

Although the secretary-general listed the Saudi Arabia-led coalition in Yemen, he once again included the coalition in a category of parties taking steps to improve, despite overwhelming evidence that coalition forces killed and harmed children on a large scale in 2018.

Houthi-planted landmines across Yemen continue to harm civilians and their livelihoods. Houthi forces have been using antipersonnel mines, improvised explosive devices (IED), and anti-vehicle mines along the western coast of Yemen, resulting in hundreds of civilian deaths and injuries. The landmines have also impeded aid workers’ abilities to reach vulnerable communities. Landmine use has been documented in six governorates in Yemen since 2015. Since January 2018, at least 140 civilians, including 19 children, have been killed by landmines in just the Hodeidah and Taizz governorates.

Landmines emplaced in farmland, villages, wells, and roads prevent civilians from going about their daily life, especially farmers whose crops and clean water supply are affected. Demining efforts suffer from poor coordination, misinformation, and inadequate training, and do not comply with International Mine Action Standards (IMAS).

Houthi forces, the Yemeni government, the UAE, Saudi Arabia, and different UAE and Saudi-backed Yemeni armed groups have arbitrarily detained people, including children, abused detainees and held them in poor conditions, and abducted or forcibly disappeared people perceived to be political opponents or security threats.

The UN Group of Eminent Experts on Yemen found that UAE and UAE-backed forces practiced arbitrary detention and torture, including sexual violence, in detention facilities they controlled. The detainees subjected to abuse included suspected members of the Islamic State and Al-Qaeda in the Arabian Peninsula, according to investigative media and human rights campaigners’ reports.

Since late 2014, Human Rights Watch has documented dozens of cases of the Houthis carrying out arbitrary and abusive detention, as well as enforced disappearances. Houthi officials have also used torture and other ill-treatment. Former detainees described Houthi officers beating them with iron rods and rifles and being hung from walls with their arms shackled behind them.

Mothers, sisters, and daughters of abducted men have demonstrated in front of prisons across major Yemeni cities, searching for their kidnapped sons, fathers, brothers, and other male relatives, organized under a group named "Mothers of Abductees Association." The association reported that there are 3,478 disappearance cases, at least 128 of those kidnapped have been killed.

Houthis continue to harass and prosecute without legal basis academics, students, politicians, journalists, and minority groups, including members of the Baha’i faith.

The Saudi-led coalition’s restrictions on imports have worsened the dire humanitarian situation. The coalition has delayed and diverted fuel tankers, closed critical ports, and stopped goods from entering Houthi-controlled seaports. Fuel needed to power generators to hospitals and pump water to homes has also been blocked. Since May 2017, journalists and international human rights organizations, including Human Rights Watch, have been facing restrictions by the Saudi-led coalition in using UN flights to areas of Yemen under Houthi control. The coalition has kept Sanaa International Airport closed since August 2016.

The Houthis have continued to impose severe movement restrictions, including the flow of aid, into Yemen’s third largest city, Taizz, which has had a devastating impact on the local residents. Since 2015, the fight for control of Taizz between the Houthis and other armed groups has led to indiscriminate shelling and attacks against civilian areas.

The UN has accused the Houthis of stealing UN food aid in some areas controlled by the Houthi-authorities, and it promised to investigate corruption in its own agencies in the Yemen aid effort.

Prior to the conflict, women in Yemen faced severe discrimination in law and practice. Warring parties’ actions have exacerbated discrimination and violence against women and girls. Parties to the conflict have accused women of prostitution, promiscuity, and immorality using derogatory terms as part of their public threats and harassment against opponents. This increases risks of domestic violence, dissuades women and girls from movement outside the home, and seriously inhibits their participation in the economic and political spheres.

There is no minimum age of marriage and child marriage, which was prevalent in Yemen before the conflict. The practice has increased according to UNICEF.

Due to its position between the Gulf of Aden and the Red Sea, Yemen has been a key transit location for African migrants seeking employment opportunities in Saudi Arabia. In August, Human Rights Watch documented a network of smugglers, traffickers, and authorities in Yemen that kidnap, detain and beat Ethiopian migrants and extort them or their families for money upon their arrival.

Migrants who manage to elude capture and detention by Yemeni smugglers find their lives at increased risk as they travel through areas of active fighting in Yemen. Migrants’ journeys are often delayed due to clashes between Houthi forces and groups aligned with the coalition. The Houthis and forces aligned with the Yemeni government have also detained, abused, and deported migrants. About 260,000 Ethiopians, an average of 10,000 per month, were deported from Saudi Arabia to Ethiopia between May 2017 and March 2019, according to the IOM, and deportations have continued.

Of the estimated 500,000 Ethiopian migrants who were in Saudi Arabia when deportation campaigns began in 2017, it is likely that most of them passed through Yemen and faced the hardships documented by Human Rights Watch.

Arms sales to the warring parties continue from Western countries such as the US, France, Canada, and others who risk complicity in war crimes and the humanitarian crisis in Yemen. In September, a UN Group of Eminent Experts on Yemen stated that “The parties to the conflict in Yemen are responsible for an array of human rights violations and violations of international humanitarian law. Some of these violations are likely to amount to war crimes.”

The UN Group of Eminent Experts in September stated that several world powers, including the US, the UK, and France, may be complicit in war crimes in Yemen through arms sales and intelligence support given to the Saudi-led coalition.

The parties have failed to acknowledge any responsibility for violations and refuse to take any meaningful steps to remedy the situations in which they occur. This has resulted in a pervasive lack of accountability, which heightens disregard for the protection of the Yemeni population and foments a climate of impunity.

Despite mounting evidence of violations of international law by the parties to the conflict, efforts toward accountability have been inadequate. However, on June 2o, 2019, the UK government agreed to suspend arms sales to Saudi Arabia after the UK Court of Appeal in London ruled that the government’s refusal to consider Saudi Arabia’s laws-of-war violations in Yemen before licensing arms sales was unlawful. The ruling requires the UK government to reconsider its decision on arms sales to Saudi Arabia. The UK is appealing the court decision.

A positive step was the extension of the mandate of war crimes investigators in Yemen by the UN Human Rights Council in September after the group found evidence of grave violations by all sides in the conflict.

The UN-brokered peace talks between the Houthis and the Yemeni government in Sweden in December 2018 achieved a cessation of hostilities in the coastal towns of Hodeida, Salif, and Ras ‘Issa. The Stockholm Agreement did not cover other ground fighting and the new military fronts. The US, the UK and other states that support Saudi Arabia and the United Arab Emirate militarily have also consistently been supporting the UN talks.

To date, the UN Security Council has used its sanctions regime against just one side, the Houthis, despite the fact that the Saudi-led coalition has committed numerous war crimes, according to research by the UN Group of Eminent Experts and groups like Human Rights Watch.

The murder of Saudi journalist Jamal Khashoggi in October 2018 galvanized international scrutiny of Saudi Arabia’s international law violations in Yemen and other states’ potential complicity in abuses through arms sales. Norway, Finland, the Netherlands and Germany reviewed or suspended their arms sales to members of the Saudi-led coalition. Other countries, notably the US, Canada, France, and Australia are still supplying weapons or military equipment.