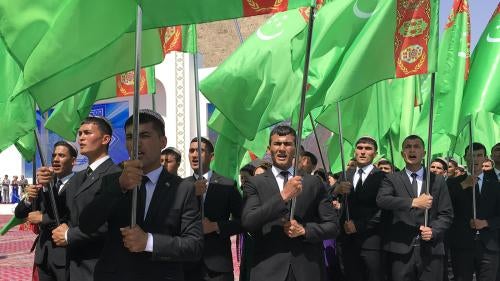 The Turkmen government’s dire human rights record saw no improvements in 2019. Turkmenistan remains an isolated and repressive country under the authoritarian rule of President Gurbanguly Berdymukhamedov and his associates.

Turkmenistan’s economic crisis continued in 2019. The government abandoned subsidies on water, gas, and electricity. Emigration from the regions most affected by the crisis continued, but authorities attempt to bar people from traveling abroad to seek work.

The government brutally punishes all unauthorized forms of religious and political expression. Access to information is tightly controlled by the state. No independent human rights monitoring groups are allowed. Dozens of forcibly disappeared are presumably held in Turkmen prisons.

There is a total absence of media freedom in Turkmenistan. The state controls all print and electronic media. Foreign media outlets have almost no access to the country. The government retaliates against local stringers for foreign outlets.

RFE/RL and the Turkmen Initiative for Human Rights (TIHR), an exile group, reported that in January the government started blocking all Virtual Private Networks (VPN) services. According to an exile-run news website, Turkmen.news, by the end of July most VPN servers were not accessible.

In March, the border control authorities, without explanation, barred Soltan Achilova, an independent journalist, from boarding a flight to attend a conference abroad. On August 20, the Security Ministry informed her that she may travel abroad.

On March 23,  Saparmamed Nepeskuliev, a freelance contributor to Turkmen.news and RFE/RL left Turkmenistan. Prior to his departure, he wrote on his Facebook page that since his 2018 release from prison, plainclothes security service agents openly followed him wherever he went and surveilled him at home.

On September 6, labor rights activist Gaspar Matalaev was released from prison, after fully serving a three-year prison sentence on unfounded fraud charges in retaliation for monitoring state-sponsored forced labor in the cotton harvest.

An activist for Baloch minority rights, Mansur Mingelov, convicted in 2012 on bogus narcotics and other charges continued to serve his 22-year sentence.

In June, Turkmenistan’s ombudsperson, Yazdursun Gurbannazarova, published the second annual report on the institution’s work. She received 985 complaints, the majority of them on housing issues and disagreement with a wide range of court decisions. Sixteen were resolved. Gurbannazarova also reported that she received 150 complaints of civil and political rights violations, three of which were resolved.

People whom the government considers disloyal, including the families of dissidents and prisoners, are arbitrarily banned from foreign travel by the authorities.  In April, the United Nations Human Rights Committee communicated a complaint to the Turkmen government regarding the case of the Ruzimatov family, relatives of a former official in exile. Authorities have banned Rashid Ruzimatov and his wife, Irina Kakabaeva, from traveling abroad since 2003, and his son Rakhim since 2014.

Authorities continued to bar citizens from the most economically distressed regions from leaving Turkmenistan and to pressure people to persuade their relatives living abroad to return.

Memorial, an independent Russian human rights  group, reported that since 2018, Turkmen authorities have been banning a dual Russian-Turkmen citizen, Stanislav Chubchik (Osipov), from leaving the country. Chubchik left Turkmenistan in 2014, and returned to visit family on March 5, 2018. The next day the migration service barred him from leaving the country for five years on bogus grounds. Police and unidentified people repeatedly harassed and intimidated Chubchik in Ashgabad in 2018 and 2019.

In March, TIHR reported that Ashgabat authorities announced plans to expropriate and demolish 75 private homes. According to RFE/RL, in July, homeowners of dozens of private houses near Ashabat International Airport also received demolition notifications. Authorities informed homeowners that they would provide apartments as compensation if they have relevant documents, but provided no information about the terms of compensation.

For more than two years, owners of homes demolished in 2015 and 2016 and who made down payments to the state on new homes, continued to rent interim dwellings while construction of their new houses remained unfinished. The government provided low-interest mortgages but no compensation for the demolished homes or the temporary accommodation because homeowners supposedly lacked resident permits or other ownership documents for their demolished homes.

On February 13, a 55-year-old Jehovah’s Witness adherent Bahram Hemdemov, was released after serving four years in Seydi Labor Camp on charges of “incitement of religious hatred” for hosting a worship meeting.

Torture and ill-treatment remain integral to Turkmenistan’s prison system. It is impossible to determine the exact number of political prisoners as the justice system of Turkmenistan completely lacks transparency. The government does not disclose information, in sensitive cases trials are closed, and independent monitoring is not possible as it puts monitors at risk of reprisals.

In March, Turkmen authorities released dissident Gulgeldy Annaniyazov after 11 years in prison but sent him for a five-year term to “a designated place of living,” or forced internal exile, which they claimed was part of his initial sentence. His family visited him there in March.

Dozens of prisoners remained forcibly disappeared or held incommunicado, in complete isolation from family, lawyers, and the rest of the world, some for almost 17 years. Families do not have official information about their fate and whereabouts. According to an international campaign dedicated to ending enforced disappearances in Turkmenistan, Prove They Are Alive, about 121 people remain forcibly disappeared. Many of them are believed to be held in Ovadandepe prison, known for torture, long-term incommunicado detentions, inhumane conditions, and holding political prisoners.

In June, Turkmen.news reported that security officials repeatedly summoned and threatened a sister of Begench Beknazarov after she attempted to visit or send him a parcel. Bekhazarov was sentenced in 2005 presumably, for alleged involvement in the 2002 alleged coup attempt. His fate and whereabouts remain unknown.

Authorities released Seyran Mamedov after he had served 12 years in prison and three in forced internal exile for allegedly helping the suspected 2002 coup plotters leave Turkmenistan.

In July, Eziz Khudaiberdiev died in a prison hospital. He was one of 10 men serving a 23-year sentence, following a closed 2017 trial, on multiple trumped-up charges, including inciting religious hatred, and for being affiliated with the Fethullah Gülen movement. In 2019, information became available that one of his co-defendendants, Akmyrat Soyunov, died in October 2018. He was also serving a 23-year prison term.

Under Turkmen law same-sex conduct between men is criminalized and punishable by a maximum two-year prison sentence.

The United States State Department continued to classify Turkmenistan as a “country of particular concern” under the International Religious Freedom Act of 1998. Citing “important national interest,” it also announced a waiver of any sanctions that could accompany the designation. The State Department gave Turkmenistan the lowest possible ranking in the 2019 US Trafficking in Person (TIP) report as the country failed to meet minimum standards to address human trafficking for the fourth year in a row. On May 22, five US senators in a letter to President Berdymukhamedov called for Annaniyazov’s release.

On March 29, the UN Human Rights Committee found the detention of three Jehovah’s Witnesses conscientious objectors to have violated their rights under the International Covenant on Civil and Political Rights.

During its annual human rights dialogue with Turkmenistan in May, the European Union  raised a range of concerns. It urged Turkmenistan to grant the International Committee of the Red Cross full and unhindered access to places of detention. The EU noted that the government had not extended visit invitations to the UN special rapporteur on torture, to the UN Working Group on Arbitrary Detention, or to the UN Working Group on Enforced Disappearances. In July, the EU announced an agreement to open a delegation in Ashgabat. In September, an EU statement at the Organization for Security and Co-Operation in Europe expressed concern about enforced disappearances in Turkmenistan’s prisons and urged the Turkmen government to address it.

On February 7, the European Bank for Reconstruction and Development cancelled a loan for offshore oil development. According to Crude Accountability, an independent environmental and human rights organization, the projected loan lacked a comprehensive social and environmental impact assessment.