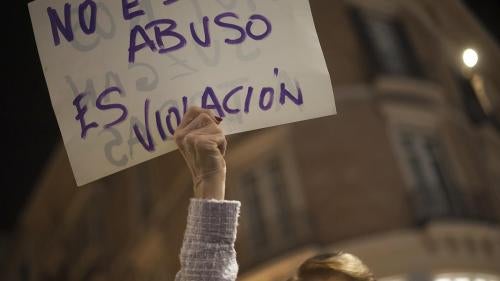 National elections in April and again in November failed to give any party enough votes to form a government.

According to UNHCR, by mid-November 22,400 people had reached Spain by sea, a 62 percent decrease over the same period the previous year, the apparent result of intensified cooperation with Morocco. Land arrivals to Ceuta and Melilla, Spanish enclaves on the north African coast, were down by 23 percent over 2018.

In a March report, the International Organization for Migration (IOM) said almost half of 1,300 migrants and refugees in Spain interviewed in 2018 had experienced exploitation and abuse on their migration journey, the majority in Morocco.

In February, the UN Committee on the Rights of the Child said Spain’s 2014 summary return of an unaccompanied Malian boy from Melilla to Morocco had violated his rights. Such summary returns continue and remain authorized by a controversial 2015 Spanish law. In October, a Ceuta judge closed on a technicality the case against 16 Guardia Civil agents in connection to the February 2014 deaths of 14 people at the border, little over a month after ordering their prosecution.

In June, the Supreme Court convicted five men for the gang rape of a woman in Pamplona in 2016, overruling a lower court’s 2018 conviction of the men on lesser charges, and sentenced them to 15 years’ imprisonment. In November, a Barcelona court convicted a different group of five men on lesser charges of abuse, rather than rape, because no violence or intimidation had been used because the 14-year-old victim was unconscious. The cases sparked protests and government pledges to examine possible changes to the criminal code. To date, no legal changes have been made.

In October, the Supreme Court convicted 9 pro-independence Catalan politicians and activists of sedition and sentenced them to between 9 and 13 years for non-violent acts in connection with the 2017 referendum on independence, previously deemed illegal by Spanish courts. Four were convicted of misusing public funds. All were acquitted of rebellion. Three other politicians were convicted of and fined for public order offences. In June, the UN working group on arbitrary detention said the detention of three of the defendants during the trial violated their rights.

In May, the UN Human Rights Committee found Spanish authorities responsible for the 2007 torture of a Basque separatist and urged Spain for the fourth time since 2009 to abolish incommunicado detention to prevent torture and cruel treatment.