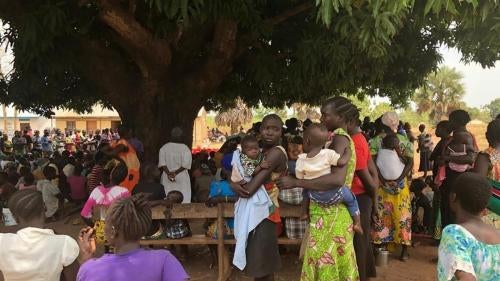 In 2019, fighting between the two main warring parties declined following the signing of the “revitalized” peace agreement in September 2018. However, amid delays implementing the peace deal, sporadic fighting continued between the army and rebel groups that were not part of the agreement.

Since the conflict started in December 2013, more than 4 million people have fled their homes, with 2.1 million taking refuge in neighboring countries. Close to 200,000 people are living in six UN “protection of civilians” sites across the country.  Seven million people require humanitarian assistance, most of whom faced acute food shortages.

Parties extended the formation of a transitional government of national unity twice—first in May by 6 months, then in November by 100 days—due to delays in implementation of key tasks including security arrangements and determination of states and their boundaries.  The government would be led by President Salva Kiir with Riek Machar as first vice president and four additional vice presidents and would govern for a 36-month transitional period.

The government continued to restrict media and civil society and arbitrarily detain journalists, perceived critics and opponents including rights activists.

There was no progress in establishing a hybrid court, comprising South Sudanese and other African judges and prosecutors, envisioned in the 2015 and 2018 peace agreements to try grave crimes committed since December 2013.

During counter-insurgency operations in Yei River state in December and January 2019, government forces attacked villages, killed, raped, and destroyed and looted property. NAS soldiers were also responsible for unlawful attacks on aid workers and civilians and restricted the movement of the general populace.

The UN peacekeeping mission (UNMISS) documented at least 104 civilian killings, 187 abductions, and 35 others wounded in the 30 attacks between September 2018 and April in Central Equatoria by various armed groups.

People with disabilities and older people were at heightened risk during attacks and faced challenges accessing humanitarian assistance. The 2019 Security Council, in a resolution renewing UNMISS’ mandate,  expressed for the first time “serious concern about the dire situation of persons with disabilities in South Sudan,” including abandonment, violence, and lack of access to basic services.

In May, a high court sentenced six men to prison terms of between 2 and 13 years on charges of terrorism, sabotage, and treason stemming from the October 7 uprising at the NSS main detention facility in Juba. The men had been detained by the NSS in 2017 and 2018 without charge for close to a year.  Among them was prominent economist and activist, Peter Biar Ajak, detained without charge since July 2018. Ajak was sentenced to a 2-year jail term on trumped up charges of disturbing the peace for speaking to foreign press.

Between June and November, military intelligence detained at least four youth from Lakes without charge or trial in the Giyada military barracks for criticizing the director 0f MI.

South Sudanese and Kenyan officials denied knowledge of the whereabouts of the two forcibly disappeared men, lawyer Dong Samuel Luak and opposition member Aggrey Ezbon Idri, who were abducted in Nairobi in January 2017 and last seen at the NSS headquarters in Juba. In April, the UN Panel of Experts concluded that it is “highly probable” that the two men were executed at the NSS training facility in Luri on the outskirts of Juba on January 30, 2017.  In July, two human rights groups filed a petition at the East African court of Justice suing Kenya and South Sudan for the enforced disappearance of the two men.

In March, the South Sudan Media Authority, an oversight mechanism, suspended UN’s Radio Miraya, citing its failure to comply with media regulations. The UN, stating its agreement with South Sudanese authorities to operate in the country, has continued to broadcast without license. The ministry of information continued to block access to online media websites Radio Tamazuj and Sudan Tribune and blogs Nyamilepedia and Paanluel Wel since 2017.

In May, the minister for information, Michael Makuei Lueth, warned against protests, in response to calls by the Red Card Movement, a diaspora youth group, for public anti-government demonstrations. Government security forces closed public spaces and protests did not take place. The government, with support from Kenyan authorities, conducted a campaign of cross-border harassment, intimidation, and threats against movement members.

Authorities harassed, arrested, and detained at least 16 journalists between January and September. On July 17, newspaper editor, Michael Christopher was detained in connection to an opinion article he wrote in support of protests in Sudan in January. He was released on August 26 without charge.

On October 31, authorities revoked press credentials and expelled Sam Mednick, a freelance journalist for the Associated Press, in response to an article she wrote. A French journalist Bastein Renouill, on assignment with France24 was arrested and deported on November 4.

South Sudan’s laws criminalize consensual same-sex relations, and make it an offence for “any male person who dresses or is attired in the fashion of a woman in a public place”.

In April, the National Constitutional Amendment Committee (NCAC) presented draft amendments to the minister of justice and constitutional affairs draft, to reform the country’s security organs—including the army—as required by the peace agreement. The National Security Service amendment bill, finalized in July, was also pending at time of writing. However, the bill retains NSS powers of detention and arrest without warrant, in violation of international norms.

In November, the minister presented to the national legislative assembly a bill incorporating the 2018 “revitalized” agreement into the existing transitional constitution-the agreement has supremacy over the constitution.

South Sudan did not make progress in establishing the African Union-South Sudanese hybrid court envisioned in the peace agreement. It has yet to sign the memorandum of understanding with the AU or promulgate legislation to establish the court.

In April, the government hired Gainful Solutions Inc., a US-based lobby group to “reverse current sanctions and further block potential sanctions” and “delay and ultimately block establishment of the hybrid court...” Following public criticism, the terms of the contract were later revised to exclude blocking of the hybrid court.

The US in December 2018 sanctioned Gregory Vasily, Israel Ziv, Obaw William Olawo, and three firms they control for their role in fueling the conflict.

Appeals stalled in the case of the Terrain hotel attack on the outskirts of Juba, in which soldiers raped and sexually assaulted at least five aid workers and murdered a journalist in July 2016. A court sentenced 10 soldiers to prison terms of 7 years to life imprisonment for the crimes in 2018.  As the court case file disappeared, the court could not hear appeals by both victims and those convicted.

In September, a special court to address non-conflict related sexual and gender-based violence crimes was launched and operationalized.

In March, the UN Security Council renewed the mandate of UNMISS for another year, and the UN Human Rights Council renewed the mandate of the Commission on Human Rights in South Sudan for another year. The commission presented its report documenting continuing human rights violations, including rape and sexual violence, finding they may amount to war crimes.

The UN Panel of Experts on South Sudan in an April report  found that neighboring states likely violated the terms of the UN arms embargo imposed on South Sudan in 2018, including by not providing inspection reports as required, making it impossible for the panel to ascertain whether any new weapons were imported. In July, the UN Security Council voted to renew the UN arms embargo by a year, and extended an asset freeze and global travel ban for eight South Sudanese nationals for their role in the conflict.

In October, the US sanctioned businessmen Ashraf Seed Ahmed Al-Cardinal and Kur Ajing Ater and five companies controlled by Al-Cardinal for their involvement in bribery, kickbacks, and procurement fraud with senior government officials.

The Intergovernmental Authority on Development (IGAD) and the African Union continued to play a key role in mediating the conflict.

In November, president Museveni of Uganda, president of Sudan's Transitional Sovereign Council, Abdal-Fatah Al-Burhan, and Kenya's special envoy on South Sudan, Kalonzo Musyoka, facilitated talks between South Sudanese parties in Kampala, Uganda, where they agreed to the extension of the pre-transitional period by 100 days.