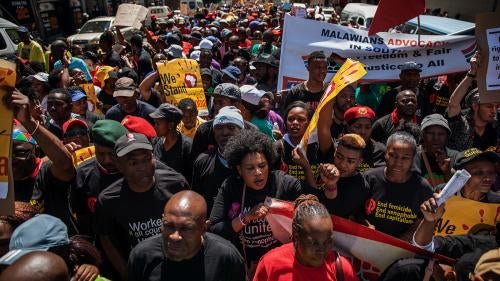 On May 8, Matamela Cyril Ramaphosa was elected to a five-year term as president after serving briefly in the same role following the resignation of Jacob Zuma in February 2018. The election saw the lowest voter turnout in history, as many South Africans expressed frustration over growing inequality, high unemployment, and corruption.

Economic insecurity, among other factors, led to xenophobic violence against African foreign nationals and their businesses in March 2019, when hundreds of foreign nationals in Durban sought shelter at police stations or other places, as their homes, trucks, and other belongings were looted or destroyed. The same day the attacks began, on March 25, the South African government launched a National Action Plan to combat Racism, Racial Discrimination, Xenophobia and Related Intolerance.

Former President Jacob Zuma appeared before the Commission of Inquiry into Allegations of State Capture, Corruption and Fraud in the Public Sector including Organs of State in July. The commission, led by Deputy Chief Justice Raymond Zondo, was established by Ramaphosa in August 2018 in response to allegations that the former president had entered into an agreement in which companies owned by the Gupta family were awarded lucrative government contracts and influence in exchange for employing Zuma’s family members and financial compensation. At time of writing, Zuma had not been charged or convicted for these crimes.

From March 25 to April 2, 2019, violence by South Africans against foreign nationals erupted in the eastern eThekwini municipality, one of South Africa’s most heavily populated areas, which includes the city of Durban and surrounding towns. Police did not make any arrest following the looting and destruction of foreign-owned homes and businesses, during which some foreign nationals were killed and several others seriously injured.

Police Minister Bheki Cele said in June the police had arrested 91 alleged attackers; however, they were only charged with minor traffic offenses, and the minister did not describe any clear steps police would take to stop the violence and protect truck drivers and cargo.

In September, sporadic violence targeting African foreign nationals and their businesses broke out in parts of Durban, Pretoria, Johannesburg City and surrounding areas of Germiston, Thokoza, Katlehong, Alberton, Alexandra, and Malvern. The attacks left 12 people dead, thousands displaced, and businesses wantonly looted. More than 600 people were arrested on various charges related to public violence and looting, malicious damage to property, and grievous bodily harm. The arrests took place amid concerns that, as with previous waves of xenophobic violence, prosecutions will fail if police investigations are not thorough.  On September 3, President Ramaphosa posted a video message on Twitter in which he condemned the violence in the strongest terms and called for the attacks to stop immediately.

On March 25,  the government launched a National Action Plan to combat xenophobia, racism, and discrimination, marking an important step toward addressing the widespread human rights abuses arising from xenophobic and gender-based violence and discrimination that continue to plague South Africa.

The five-year plan, developed in consultation with civil society, aims to raise public awareness about anti-racism and equality measures, improve access to justice and better protection for victims, and increase anti-discrimination efforts to help achieve greater equality and justice.

But the Action Plan fails to address a key challenge fueling the problem: the lack of accountability for xenophobic crimes. Virtually no one has been convicted for past outbreaks of xenophobic violence, including the attacks in 2019, the Durban violence of April 2015 that displaced thousands of foreign nationals, and the 2008 attacks on foreigners, which resulted in the deaths of more than 60 people across the country.

In February, Ramaphosa acknowledged that South Africa has “not achieved nearly enough” regarding the rights of people with disabilities. The ruling African National Congress’s (ANC) 2019 election manifesto stated the party’s commitment to including “the needs of people with disability in all government programmes.” It acknowledged that the education, training, and health systems need “radical improvements.”

South Africa continues to expand its parallel, special education system for people with disabilities and those deemed to have ongoing learning barriers, preventing them from learning in an inclusive general school system. Human Rights Watch and expert groups’ research shows that social workers and education officials refer children to special schools in many cases after a long and tedious process of referrals and assessments. Such referrals often prevent children’s entry into inclusive, mainstream education. This limits their access to a full cycle of basic education, to which they are entitled by law. Many children are in special schools that segregate them and do not support their holistic development or cognitive skills.

In March 2019, Ramaphosa said his government was looking into decriminalizing sex work, which has been illegal in South Africa since at least the early 1900s. South African laws also prohibit other aspects of sex work, including running or owning a brothel, living off the earnings of “prostitution,” and enticing a woman into “prostitution.”

Criminalization has undermined sex workers’ access to justice for crimes committed against them and exposed them to unchecked abuse and exploitation by law enforcement officials, including police officers. And although the Department of Health’s National Strategic Plan on HIV for Sex Workers is grounded in respect for the human rights of sex workers, criminalization hinders sex workers’ efforts to access health care, including HIV prevention, treatment, care, and support.

Nationwide protests took place in September following the killings of multiple women and many instances of gender-based violence. The violence spurred an #AmINext movement where women on social media called out their alleged abusers. Protesters called for a national emergency and expressed anger over the government’s failure to better protect women. According to the Women’s Minister, Maite Nkoana-Mashabane, more than 30 women were killed by their spouses in August alone.

In response to the protests, the ANC vowed to amend the Sexual Offences Act and Domestic Violence Act in order to ensure harsher punishments for offenders, as well as other reforms, including making the National Register for Sex Offenders (NRSO) public.

In September, the Equality Court ruled that a trans woman detained in a male prison, Jade September, had the right to express her gender identity while in prison. This meant that, as a woman transgender inmate, she could express her gender identity while incarcerated in an all-male prison, including the right to wear her hair long; wear make-up; wear female clothing and be addressed by officials using female pronouns.

During 2019 there was no progress in identifying or arresting those responsible for the murder of Sikhosiphi Rhadebe, a Xolobeni community activist killed in 2016. His family said the investigation into his murder had stalled. Community activism against the harmful impact of mining, like Rhadebe’s, has often been met with harassment, intimidation, and violence.

Community and environmental rights activists have faced harassment for demanding their rights to health and a healthy environment. South Africa is one of the world’s biggest coal producers, and a leading producer of a wide range of metals. The serious environmental, health, and social impacts of mining, coupled with a lack of transparency, accountability, and consultation, have increased public opposition to mining projects.

South Africa, as a non-permanent member of the United Nations Security Council for 2019-2020, played a leading role in addressing the situation in Sudan, advocating for the UN to adhere to the decisions made by the African Union Peace and Security Council in an effort to stem abuses against civilians. Sweeping political changes in Sudan also led South Africa to push for a responsible and flexible drawdown of the UN peacekeeping force in Darfur, UNAMID, in opposition to China and Russia’s position to keep UNAMID’s exit on schedule. In May, an informal Security Council discussion on Cameroon’s humanitarian situation was met with strong opposition from South Africa, as well as the other two African members of the council. South Africa also opposed a Security Council discussion on Venezuela in January.

Following the outbreak of xenophobic violence in September, South Africa’s diplomatic relations with other African nations, notably Nigeria, became strained. Nigeria repatriated over 600 of its citizens living in South Africa following the attacks. Following reprisal attacks in Nigeria, the South African government on September 5 temporarily shut down its embassy in Abuja, Nigeria.

South Africa held the World Economic Forum on Africa in Cape Town in September but Malawi, Rwanda, and the Democratic Republic of Congo did not attend due to the xenophobic attacks against their citizens in South Africa.