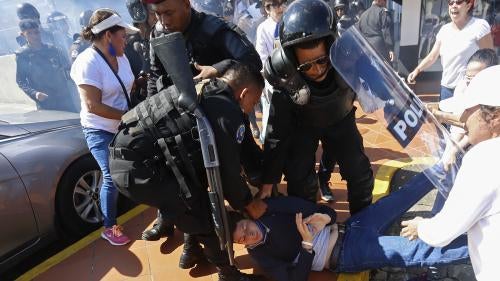 Since taking office in 2007, the government of Nicaraguan President Daniel Ortega has dismantled nearly all institutional checks on presidential power. Stacked with his supporters, the Electoral Council has barred opposition political parties and removed opposition lawmakers. The Supreme Court of Justice has upheld Electoral Council decisions undermining political rights and allowing Ortega to circumvent a constitutional prohibition on re-election and run for a second term.

Ortega’s Sandinista Party secured a 79 percent majority in Congress in 2016, enabling it to fast-track institutional reforms that gave the president direct personal control over the police and army, allowed him to legislate by decree, and run for re-election indefinitely.

A brutal crackdown by National Police, the sole government law enforcement body in Nicaragua, and armed pro-government groups in 2018 left 300 dead, over 2,000 injured, and hundreds arbitrarily arrested and prosecuted. Since dissipation of the protests, the Ortega government has brought hundreds of criminal cases against protesters and critics, but as of September had only opened four investigations into allegations of misconduct by the National Police.

Other persistent problems in Nicaragua include severe restrictions on freedom of expression and association, political discrimination against state workers who support the opposition, and stringent abortion laws that leave no options for rape victims. 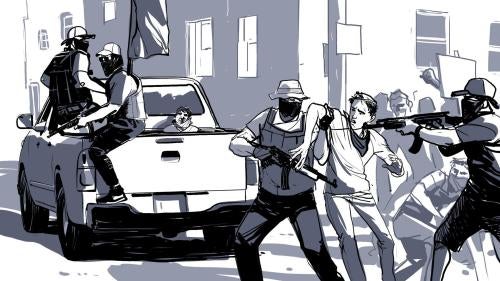 In April 2018, massive anti-government protests broke out countrywide. The National Police, in coordination with armed pro-government groups, brutally repressed protesters, resulting in 328 deaths and more than 2,000 people injured. As the crackdown intensified, some individuals responded violently and official figures show that 22 police officers died in the context of the demonstrations between April and September 2018.

Hundreds of protesters were arbitrarily arrested and detained, many for several months. As of February 2019, the Inter-American Commission on Human Rights (IACHR) documented at least 777 people arrested during the crackdown. Many were subject to torture and other ill-treatment, including electric shocks, severe beatings, fingernail removal, asphyxiation, and rape.

Prosecutions of detainees were marred by serious violations of due process and other fundamental rights. Many detainees were held incommunicado, subjected to closed-door trials, and denied the right to confer privately with their defense lawyers. Many were charged with “inciting terrorism” using Nicaragua’s overly broad counterterrorism law or other serious crimes, despite what the Office of the High Commissioner of Human Rights (OHCHR) found to be often insufficient or contradictory evidence.

In February 2019, the government and the opposition resumed stalled negotiations. However, pro-government elements continued to suppress protesters violently. In March, an alleged member of the Sandinista Party shot at demonstrators, injuring three. In June, pro-government mobs beat and threw stones at Catholic churchgoers gathering in memory of 15-year-old Sandor Dolmus, an altar boy shot in the chest during protests a year earlier. Police also arrested, and subsequently released, over 100 people in the context of new protests in March.

From mid-March to mid-June, the Ortega administration released, mostly under restrictive regimes such as house arrest, 492 people detained in the context of the protests. The IACHR estimated that about 130 people remained in prison as of October.

In mid-June, a broad amnesty for crimes committed in the context of the anti-government protests came into force. All of those released under restrictive measures were then granted amnesty, the OHCHR reported. Although the amnesty excluded certain crimes, it risks being used to shield from prosecution officers responsible for serious abuses, given the lack of judicial independence. The OHCHR reported in September that authorities had prosecuted only individuals involved in protests or critical of the government, except for one case involving a man convicted of murdering a Brazilian student during the unrest in July 2018, who was later released under the amnesty law.  The OHCHR also said in September that the Attorney General’s office had opened investigations into four complaints of alleged abuse by police forces against detainees; one complaint was dismissed for lacking credibility and the other three had not advanced at the time of writing. President Ortega has promoted top officials implicated in abuses.

In November and December 2018, Congress stripped nine nongovernmental organizations (NGOs) of their legal registration, effectively forcing them to close.

The IACHR has noted an increase in harassment, attacks, and threats against human rights defenders since protests broke out in 2018. In August 2019, a pro-government mob attacked and robbed Aura Alarcón, an attorney who defended protesters, at a bus station in Managua. Alarcón said policemen watched without intervening. Also in August, prominent human rights defender and leader of Nicaragua’s workers party, Freddy Navas, was detained and questioned by police upon his return to Nicaragua from Costa Rica. He was accused of financing a march in Costa Rica and had his personal belongings confiscated.

In September, the commander in chief of the Nicaraguan Army, Julio César Avilés Castillo, accused NGOs of being coup-plotters who have violated the laws of the republic.

In December 2018, the National Police raided the offices of news outlet Confidencial, confiscated materials, and occupied the headquarters. Also in December, police raided the studio of news channel 100% Noticias and detained, on terrorism charges, Miguel Mora, the channel’s owner, and Lucía Pineda, its chief press officer. The two were held without due process, in conditions that included solitary confinement, for five months. They were freed under the amnesty law in June 2019.

Nongovernmental organizations (NGOs) estimate that over 100 journalists have fled Nicaragua since April 2018.

Since the outlawing of anti-government demonstrations in September 2018, the National Police have denied eight requests for protest permits.

During the crackdown, Nicaraguan Health Ministry authorities fired at least 400 doctors, nurses, and other health workers from several public hospitals in apparent retaliation for participation in protests or expression of disagreement with government policy. Forty professors from the National University of Nicaragua accused of supporting or taking part in anti-government demonstrations were also fired in August 2018. The IACHR found that authorities threatened public officials with dismissal if they did not participate in pro-government demonstrations.

More than 88,000 Nicaraguans have fled their country since the crackdown began, the IACHR reports. In April, the United Nations High Commissioner for Refugees (UNHCR) reported that the number of Nicaraguans applying for asylum in neighboring Costa Rica had about doubled, to 29,500, from 15,584 in October 2018. Another 26,000 were waiting to have their claims processed.

While most fleeing Nicaraguans have gone to Costa Rica, thousands more have gone to Mexico, Panama, and the United States.

Nicaragua has, since 2006, prohibited abortion in all circumstances, even if a pregnancy is life-threatening or the result of rape or incest. Women and girls who have abortions face prison terms as long as two years. Medical professionals who perform abortions face sentences of one to six years. The abortion ban forces women and girls facing unwanted pregnancies to have clandestine abortions, risking their health and lives.

The continuing human rights abuses in Nicaragua have been met with strong regional and international condemnation.

In March, the UN Human Rights Council adopted its first resolution on Nicaragua with cross-regional support, condemning abuses and urging Ortega’s government to resume cooperation with international human rights bodies and negotiations with the opposition. In May, Nicaragua underwent its Universal Periodic Review (UPR) at the council, during which 90 delegations submitted recommendations for improving human rights standards in Nicaragua.

In June, the Organization of American States (OAS) General Assembly passed a resolution proposed by the OAS Permanent Council Working Group on Nicaragua that opens the door to evaluation of Nicaragua’s compliance with the 2001 Inter-American Democratic Charter. The resolution urges the Nicaraguan government to take a series of steps to resume negotiations with the opposition and restore access for international rights-monitoring mechanisms. It instructed the Permanent Council to appoint a commission to undertake diplomatic efforts toward solving the crisis and to produce a report within 75 days. However, in September, the Ortega government barred the appointed commission from entering the country.  Last year, the regime expelled IACHR Special Monitoring Mechanism for Nicaragua (MESENI) and the IACHR-appointed Interdisciplinary Group of Independent Experts (GIEI).

In September, UN High Commissioner for Human Rights Michelle Bachelet released a comprehensive report on the human rights record of Nicaragua from August 2018 to July 2019. The report recommended that Nicaragua guarantee freedoms for civil society, reinstate NGOs and media outlets, pursue investigations, prosecute individuals accused of human rights abuses in the context of the protests, and end arbitrary arrests, among other measures.

In October, the European Union adopted a sanctions framework for Nicaragua, which provides a legal mechanism for imposing targeted sanctions, including travel bans and asset freezes against top Nicaraguan officials responsible for abuse.