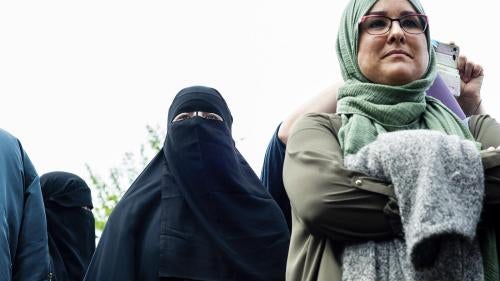 A controversial new law banning full-face coverings, including the niqab and burka worn by some Muslim women, on public transport, in hospitals, town halls, and educational institutions, entered force in August. There were complaints from public sector organizations that the law was unclear and from nongovernmental groups that it would have a discriminatory impact on Muslim women. Some local police forces and transport authorities said they would not prioritize enforcing the ban.

During the year the UN Human Rights Committee, the European Commission against Racism and Intolerance and the UN special rapporteur on freedom of religion and belief  raised concerns about the discriminatory impact of legislation and public rhetoric on religious minorities, and Muslims in particular.

In May, the government proposed changes to the law on rape and sexual assault to introduce a requirement for consent, and to criminalize sexual harassment, to bring Dutch law into line with the Istanbul Convention. At time of writing no legislation had been introduced.

Dutch authorities continued to use their powers to remove Dutch citizenship from dual nationals suspected of traveling abroad to participate in terrorism. In April, however, the Council of State, the highest administrative court, annulled the decision to deprive two Dutch foreign fighters of citizenship, because the decision had been taken before the group they were believed to be affiliated with was proscribed. In November, a district court in the Hague ruled that the Dutch government should ensure the return of Dutch children, under the age of 12, of ISIS suspects, who remained in custody in northern Syria. The government announced that it would appeal the decision.

In April, the government told parliament it intended to simplify the process by which transgender adults could change their legal gender on their birth certificate, and to allow children aged 16 or under to apply to courts to have their gender registration changed, which is not currently permitted. No legislation had been introduced at time of writing.

In February, the government ended a policy in effect since 2012 allowing applications for permanent residency from children in asylum seeking families and unaccompanied undocumented children who had lived in the country for more than five years. It did, however, agree to consider applications of the 600-700 children in the Netherlands and eligible under the policy.