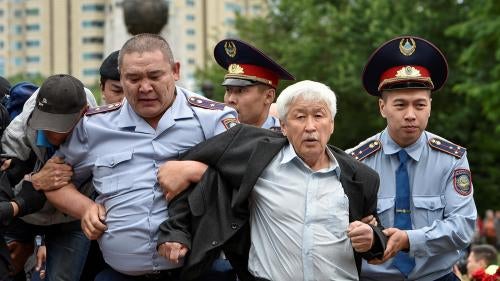 A leadership change in Kazakhstan in 2019 did not significantly improve respect for human rights. On March 19, Kazakh President Nursultan Nazarbaev resigned after 30 years in power, naming Senate speaker Kassym-Jomart Tokaev as interim president. In snap elections in June, Tokaev ran as the ruling party candidate and won in a vote marred by irregularities. The authorities responded to widespread peaceful protests around the elections with mass detentions. Kazakhstan continued to unfairly jail rights activist Max Bokaev, and intensified harassment of perceived or actual opposition members. Independent trade unions remained stymied by the government’s ongoing failure to reform the 2014 Trade Union Law.

In snap presidential elections on June 9, Tokaev won with 70 percent of the vote. The Organization for Security and Co-operation in Europe (OSCE) said the vote was marred by “significant irregularities,” including ballot stuffing. Thousands took to the street to contest the outcome.

There was a significant increase in protest activity in Kazakhstan in 2019. In the build-up to elections in June, authorities denied permits for peaceful protests, regularly broke up demonstrations, and detained participants of single-person pickets. One man was detained just for holding up a blank poster.

Between election day on June 9 and June 13, 4,000 people were detained nationwide for protesting the vote. Ryszard Komenda, reginal representative on Central Asia for the Office of the United Nations High Commissioner for Human Rights (OHCHR), called the government’s actions “extremely regrettable,” and urged it to respect freedom of assembly.

After the elections, President Tokaev signaled that he would relax constraints on freedom of assembly, specifically by reforming the country’s restrictive protest law, although no legal changes have so far taken place. While some protests were allowed to go ahead without arrests or other interventions, protests against growing Chinese investment resulted in dozens of arrests, and more than 100 people were detained at demonstrations called for by banned opposition movement Democratic Choice of Kazakhstan in September. Kazakhstan’s parliament passed a law in October creating additional legal penalties for parents accused of “involving” their children in protests.

A new youth movement called Wake Up, Kazakhstan was formed to advocate for constitutional reform. Members of the group and other youth activists complained of pressure from the authorities such as threats, limits on foreign travel, and increased surveillance, particularly on protest days. Despite this, the group was able to hold rallies in August and November without intervention.

Serikzhan Bilash, whose activism drew attention to the crackdown in China’s Xinjiang region, pleaded guilty to spurious criminal charges of incitement in August. Bilash was banned from civic activism as a condition of his release. In February Bilash was fined $670 for leading a rights group called Atajurt that the authorities had refused to register.

Maks Bokaev, imprisoned for peacefully protesting proposed land code amendments in 2016, continued to serve a wrongful five-year sentence. In September, he was denied a request to be transferred to a prison closer to his home. Mukhtar Dzhakishev, former head of the atomic energy agency Kazatomprom, was denied parole in September despite international calls for his release. He has been serving a 14-year sentence since 2010.

According to Adilsoz, a local media watchdog, there were 54 detentions, arrests, convictions, or limits on the freedom of journalists between January and September. There were eight attacks, including during a press conference in July hosted by a human rights group in which five journalists had equipment damaged or stolen. Radio Azattyq, the Kazakh-language service of Radio Free Europe/Radio Liberty, complained of repeated interference in its work, including attacks with pepper spray.

Telecoms providers stopped requiring users to download a technology that experts worried might allow authorities to sidestep encryption mechanisms and monitor conversations, after President Tokaev abandoned the measure in August.

In August, journalist Yaroslav Golyshkin, who was serving an eight year sentence since 2015 on charges of “blackmail,” was pardoned by President Tokaev and released.

Authorities increased harassment of perceived or actual Democratic Choice of Kazakhstan (DVK) supporters after the group was banned in 2018. As of March, at least nine people were convicted of involvement with DVK, several merely for reposting or sharing DVK materials online.

In Almaty, three women who were put into pretrial detention in July after participating in a rally DVK called for in May were convicted in November, but were sentenced to one year of “limited freedom,” rather than prison.

In the first half of 2019, authorities brought 106 administrative cases against individuals or religious communities, leading to fines or short-term bans on worship—an increase from the same period last year, according to the religious freedom watchdog Forum18.

In January, parliament recalled amendments to the country’s religion law that would have significantly increased restrictions and sanctions on religious teaching, proselytizing, and publications.

Authorities took no effective  steps to restore freedom of association rights for independent trade unions in 2019. At a meeting in June, the International Labour Organization (ILO) criticized Kazakhstan for ongoing restrictions on union activities. The government said amendments to trade union legislation were submitted to parliament in July, but was not publicly available at time of writing.

Three activists—Nurbek Kushakbaev, Amin Eleusinov, and Larisa Kharkova—remained banned from leading trade unions. The Congress of Independent Trade Unions of Kazakhstan (now Congress of Free Trade Unions of Kazakhstan) continued to be denied registration. In July, a court sentenced trade union leader Erlan Baltabay to prison for seven years on charges of misappropriating union funds. Though he was released in August due to a presidential pardon, in October he was sentenced to five more months in prison for failing to pay a required fine.

Kazakhstan repatriated 524 citizens—mostly women and children—who were detained in northern Syria as Islamic State (ISIS) suspects or relatives. Following a visit to Kazakhstan in May, the UN special rapporteur on human rights and counterterrorism praised the repatriations while emphasizing that deradicalization and reintegration programs for returnees, as well as trials for those accused of crimes, must comply with human rights. The special rapporteur also said Kazakhstan should amend overbroad laws on terrorism and extremism that target civil society or religious groups.

In August, a court sentenced eight men who participated in an online religious discussion group to five-and-a-half and eight years in prison for “propaganda of terrorism” and “inciting hatred,” despite a reported lack of evidence that any of them promoted or had links to violent extremism.

Kazakhstan has no criminal statute against domestic violence, which remains widespread and under-reported. Services for survivors are inadequate and do not meet international standards. Police routinely fail to register complaints, adequately respond to domestic violence cases, and inform survivors of their rights to protection orders. In its fifth periodic review of Kazakhstan in October, the Committee on the Elimination of Discrimination against Women (CEDAW) expressed concerns about decriminalization of domestic violence and urged Kazakhstan to “ensure that domestic violence is specifically criminalized.”

In March, the UN Committee on Economic, Social and Cultural Rights expressed concern that Kazakhstan’s constitution and laws do not explicitly prohibit discrimination on the basis of gender identity or sexual orientation, and called on Kazakhstan to adopt anti-discrimination legislation.

In May, a court backed the Almaty city Justice Ministry in its repeated decisions to deny registration to Feminita, a group that focuses on the rights of lesbian, bisexual, and queer women. That decision was upheld by an appeals court in September.

In a positive move, Kazakhstan’s Supreme Court ruled in July that a man who filmed a lesbian couple kissing and distributed that video online had violated their privacy. 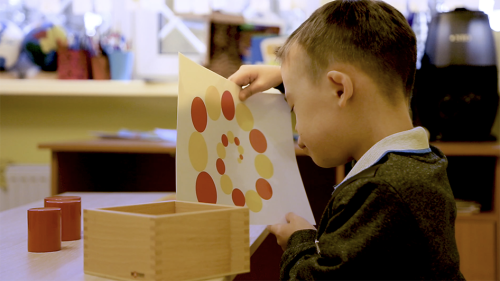 In several cases, police officers and prison officials were convicted and sentenced to prison on charges of torture.  However, of 119 reports of torture registered by law enforcement agencies in the first half of 2019, only 13 had been sent to court.. In August, seven prison officials were arrested after videos leaked showing officers torturing inmates in the prison of Zarechnoe. President Tokaev ordered the general prosecutor to conduct a “detailed investigation,” but human rights activists expressed concern in October after more than half of the plaintiffs withdrew their accusations against prison officers.

In October, two ethnic Kazakh citizens of China were detained after crossing the border between the two countries in eastern Kazakhstan. They said they were fleeing repressive measures—including arbitrary detentions and torture—by the Chinese authorities in Xinjiang. They are being held in pretrial detention in a remote city in eastern Kazakhstan, according to their lawyer.

In March, the European Parliament adopted a resolution calling on Kazakhstan to end its broad violations of human rights, including the rights to freedom of expression, assembly, and religion. It also called for the freeing of unjustly imprisoned activists, including Max Bokaev. European Council President Donald Tusk said in a visit in May that he had spoken with Tokaev about reforms, including the improvement of rule of law and fundamental rights.

Following election irregularities reported by the OSCE monitoring mission, the United States called on Kazakhstan to respect citizens’ human rights and “immediately release all those detained for taking part in peaceful protests regarding the election.” The European Union similarly called on Kazakhstan’s new government to address shortcomings observed during the vote. The EU separately criticized Kazakhstan for its failure to adopt amendments to the Trade Union Law, noting that its enhanced Partnership and Cooperation Agreement “includes commitments to effectively implement the ILO fundamental Conventions.”