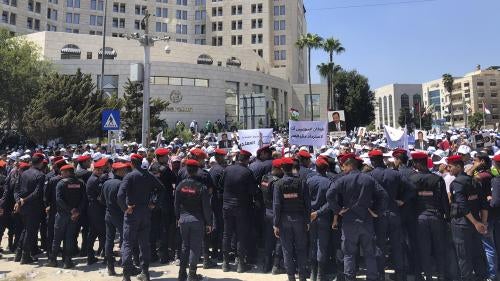 In 2019, protests against the Jordanian government’s economic austerity policies increased, including a mass public teachers’ protest and one-month strike beginning in September. The teachers demanded a 50 percent pay raise they said the government promised in 2014, but eventually agreed to a 35 to 75 percent raise depending on a teacher’s rank. As protests grew, authorities stepped up arrests of political and anti-corruption activists.

Jordan hosted over 657,000 Syrian refugees and over 90,000 refugees of other nationalities in 2019, but authorities have not allowed Syrians to enter Jordan to seek asylum since mid-2016 and took steps to prevent others from seeking asylum in 2019. In 2019, Jordanian authorities did not allow aid deliveries from Jordan to tens of thousands of Syrians at a remote camp along the border.

Authorities detained over 30 political and anti-corruption activists in 2019 and filed charges against some that violated the right to free expression. Most of those detained were linked to a loose coalition of political activists across the country known as the hirak (movement). The charges filed against activists ranged from insulting the king (“lengthening the tongue against the king”) to the vague charge of “undermining the political regime” and online slander.

Among the activists detained in 2019 was Sabri al-Masha’leh, a 31-year-old teacher from the town of Dhiban. Authorities arrested him in response to four Facebook posts he wrote in February, only one of which referred to the king by name. Prosecutors charged him with insulting the king, and in April Amman’s Court of First Instance sentenced him to two years in prison. The court later reduced the sentence to one year, which al-Masha’leh is serving in Sawaqa Prison, south of Amman.

Authorities detained Ahmed Tabanja, 33, a human rights activist from the northern town of Irbid, on March 17, while he used his phone to broadcast over Facebook Live a protest by unemployed Jordanians in front of the royal court complex in Amman.

In late December 2018, authorities proposed amendments to Jordan’s 2015 Electronic Crimes Law that would overly restrict freedom of expression by stipulating criminal penalties for posting “rumors” or “fake news” with “bad intentions” or engaging in “hate speech” online. The amendments maintain criminal penalties for online defamation but, in a positive move, would eliminate pretrial detention for this offense. Jordan’s lower house of parliament rejected the draft amendments in February, and as of September they were under consideration in the upper house.

In 2019, Prime Minister Omar al-Razzaz convened an inter-ministerial committee to overhaul the country’s pre-approval process for local and international nongovernmental organizations (NGOs) operating in Jordan to receive funding from foreign sources. Local NGO leaders have long complained that the pre-approval process instituted in 2015 lacks transparency and can take months. In June, Jordan’s central bank suddenly mandated that all money transfers from an international NGO’s headquarters to its branch in Jordan require government pre-approval, but the government ordered the bank to reverse the decision on July 11.

Under the Public Gatherings Law amended in March 2011, Jordanians did not require government permission to hold public meetings or demonstrations, but organizations and venues continued to seek permission from the Interior Ministry or General Intelligence Department to host public meetings and events. In some cases in 2019, security authorities cancelled public events without explanation.

By late 2018, over 657,000 people from Syria had sought refuge in Jordan, according to the UN High Commissioner for Refugees (UNHCR). Over 85 percent of Syrians lived outside refugee camps. In 2019, Jordan did not permit Syrians to enter the country to seek asylum.

According to UNHCR, Jordan also hosted asylum seekers and refugees from other countries in 2019, including 67,500 Iraqis, 14,600 Yemenis, 6,100 Sudanese, and 1,700 from other countries. Beginning in January, Jordanian authorities prevented UNHCR from registering as asylum seekers individuals who officially entered the country for the purposes of medical treatment, study, tourism, or work, effectively barring non-Syrians from being recognized as refugees and leaving many without UNHCR documentation or access to services.

In 2019, authorities continued to implement the Jordan Compact, which aimed to improve the livelihoods of Syrian refugees by granting new legal work opportunities and improving the education sector. By August 2019, labor authorities had issued or renewed at least 153,535 work permits for Syrians since 2016. Most professions, however, remained closed to non-Jordanians, and many Syrians continued to work in the informal sector without labor protections.

In August, the Jordan office of the United Nations Relief and Works Agency for Palestine Refugees in the Near East (UNRWA) announced a budget shortfall of $151 million following the cancellation of all US funding to the agency in 2018. UNRWA warned that the funding gap would disrupt vital education, relief, and health services to the over 2 million Palestine refugees living in Jordan.

In 2019, Jordanian authorities did not allow aid deliveries from Jordan to tens of thousands of Syrians at Rukban, an unorganized camp along Jordan’s border with Syria. Camp residents have been besieged by Syrian government-aligned forces since 2018 and face limited access to food, water, and medical assistance. In late August, a UN official said that the UN would help facilitate voluntary evacuations of camp residents to other parts of Syria, and that only 12,700 people remained in the camp.

Jordan’s personal status code remains discriminatory, despite a 2010 amendment that widened women’s access to divorce and child custody. Marriages between Muslim women and non-Muslim men are not recognized. In 2019, lawmakers rejected a proposed amendment to the personal status law that would have increased the minimum marriage age from 15 to 16, albeit without the exception that children between ages 16 and 18 could  marry with court approval.

Article 9 of Jordan’s nationality law does not allow Jordanian women married to non-Jordanian spouses to pass on their nationality to their spouse and children. In 2014, authorities issued a cabinet decision purporting to ease restrictions on non-citizen children of Jordanian women access to key economic and social rights, but the easing fell short of expectations. In 2019, as part of an overhaul of the country’s labor law, authorities exempted non-citizen children of Jordanian women from work permit requirements, but many professions in Jordan remained closed to non-Jordanians.

Article 98 of Jordan’s penal code, amended in 2017, states that the “fit of fury” defense does not apply to perpetrators of crimes “against women” who cannot receive mitigated sentences, but judges continued to impose mitigated sentences under article 99 if family members of victims did not support prosecutions of their male family members. Local media reported in July that 12 women in had been killed by family members in Jordan since the beginning of 2019.

As of November, authorities had not carried out any executions in 2019, but Jordan’s National Center for Human Rights (NCHR) reported that there were 151 people on death row by the end of 2018.

In July, security officials expelled over 200 members of the extended al-Shahin family from their home governorate of Madaba on the basis of a local practice known as jalwa, under which security authorities can temporary displace family members of accused murderers to deter potential revenge attacks. The abusive practice is a clear violation of Jordan’s constitution, and in recent years the Interior Ministry sought to reintroduce the concept into law.

Local governors continued to use provisions of the Crime Prevention Law of 1954 to place individuals in administrative detention for up to one year, in circumvention of the Criminal Procedure Law. The NCHR reported that 37,683 persons were administratively detained in 2018, some for longer than one year, marking an increase of over 2,700 from the number of administrative detainees in 2017.

Under the terms of a Memorandum of Understanding between the United States and Jordan signed in 2018, the US provided $1.275 billion in aid to Jordan in 2019. The US did not publicly criticize human rights violations in Jordan in 2019, except in annual reports.

The International Criminal Court (ICC) Appeals Chamber ruled on May 6, 2019 that Jordan had failed to meet its international legal obligations to arrest then-President Omar al-Bashir of Sudan, who is sought by the ICC for alleged crimes committed in Darfur, Sudan, during a 2017 visit. But the judges decided not to refer to Jordan’s lack of cooperation to the court’s assembly of members or the UN Security Council.

Jordan is a member of the Saudi/Emirati-led coalition fighting the Houthi forces in Yemen.