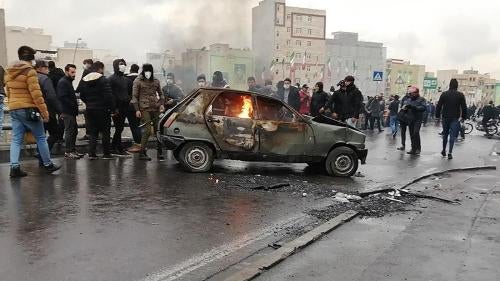 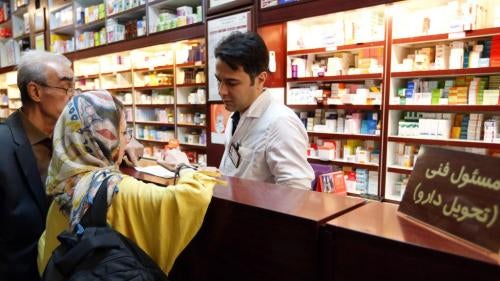 Iranian authorities brutally repressed nationwide protests that erupted after the increase of fuel prices on November 25. Video footage and eyewitness accounts that emerged after a near total government shutdown of the internet in the country show security forces directly targeting protesters who posed no threat to life. According to Amnesty International, as of December 4, at least 208 people had reportedly been killed in the protests, and a member of the parliament estimated that security forces had arrested about 7,000 people. As of December 4, the government has refused to announce the total number of deaths, and detainees remained at great risk of mistreatment.

Iran’s judiciary and security agencies continue to use vaguely defined provisions in the penal code to arrest and prosecute activists for peaceful assembly and free expression.

On January 20, authorities arrested Ismael Bakhshi, a prominent labor activist, and Sepideh Gholian, a journalist and labor activist, after they alleged that they had been tortured when they were detained in the aftermath of sugarcane factory labor protests in November 2018. On September 7, rights groups reported that branch 26 of Tehran’s revolutionary court had sentenced Bakhshi and Gholian to 14 years and 19 years and 6 months respectively for their peaceful activism. The court also sentenced Amir Amirgholi, Sanaz Allahyari, Asal Mohammadi, and Amir Hossein Mohammadifar, members of the editorial board of a labor-related online forum called Gam, who have also been detained since January, to 18 years each in prison on similar charges. If the verdicts are upheld, each of the six labor rights defenders will have to serve at least seven years of their prison sentence. In October, authorities temporarily released the labor activists until the court of appeal issues a verdict in their case.

On May 1, plainclothes police arrested at least 35 activists who had gathered in front of the Iranian parliament in a peaceful demonstration organized by independent labor organizations. Most were released on bail, but in August branch 28 of Tehran’s revolutionary court sentenced Atefeh Rangriz, an activist, and Marizeh Amiri, a journalist, both of whom have been detained since May, to 11 years and 6 months in prison with 74 lashes and 10 years and 6 months in prison with 148 lashes, respectively. If the sentences are upheld, Rangriz and Amiri must serve at least seven-and-a-half and six years of their sentences in prison, respectively. In October, authorities released Rangiz and Amir temporarily until the court of appeal issues a verdict in their case.

On August 24, a lawyer reported that branch 15 of Tehran’s revolutionary court had sentenced Kioomars Marzban, a 26-year-old satirist, to 23 years in prison on charges including “cooperating with an enemy state.” Marzan has also been convicted of insulting authorities and sacred beliefs. If his sentence is upheld, he will serve 11 years.

In August, authorities also arrested at least 16 activists in Tehran and Mashhad who had called for resignation of Ayatollah Khamenei, Iran’s supreme leader, in an open letter.

The decrease in the total number of executions over the past two years is largely due to a 2017 amendment to Iran’s drug law that increased the requirements for imposing the death penalty for drug-related charges.

Iranian law considers acts such as “insulting the prophet,” “apostasy,” same-sex relations, adultery, and certain non-violent drug-related offenses as crimes punishable by death. The law also prescribes the inhumane punishment of flogging for more than 100 offenses, including the “disrupting public order” charge that has been used to sentence individuals for their participation in peaceful assemblies.

Scores of human rights advocates, including Narges Mohammadi and Atena Daemi, remain behind bars for their peaceful activism.

On March 11, authorities sentenced Nasrin Sotoudeh, a prominent human rights lawyer, to 33 years in prison and 148 lashes for her peaceful activism, including defending women who protested compulsory hijab laws. On April 23, the court of appeal upheld the sentence. Sotoudeh, who has been detained since June 2018, will have to serve at least 12 years in prison.

While Iranian authorities claimed that he committed suicide, they have not conducted an impartial investigation into his death and placed a travel ban on his wife, Maryam Mombeini, until October. During a trial session in February 2019, Niloufar Bayani stated in the courtroom that the detained environmentalists faced psychological torture and were coerced into making false confessions. Authorities have not publicly provided any evidence concerning any of the detained environmentalists’ alleged crimes, while several senior Iranian government officials have said that they did not find any evidence to suggest that the detained activists are spies.

Several individuals charged with national security crimes, as well as human rights defenders Arash Sadeghi and Saeed Shirzad, suffered from a lack of adequate access to medical care in detention.

The IRGC’s Intelligence Organization continues to arrest Iranian dual and foreign nationals on vague charges such as “cooperating with a hostile state.” At least a dozen of these individuals remain behind bars, deprived of due process, and are routinely subjected to pro-government media smear campaigns.

Iranian women face discrimination in personal status matters related to marriage, divorce, inheritance, and child custody. A married woman may not obtain a passport or travel outside the country without the written permission of her husband. Under the civil code, a husband is accorded the right to choose the place of living and can prevent his wife from having certain occupations if he deems them against “family values.”

Iranian women, unlike men, cannot pass on their nationality to their foreign-born spouses or their children. However, after more than a decade of women’s rights activism, on October 2, the Guardian Council, a body of 12 Islamic jurists, finally approved an amended law that the Iranian parliament had passed on March 13, that now allows Iranian women married to men with foreign nationality to request Iranian citizenship for their children under age 18. A child who has already turned 18 could directly request Iranian citizenship. The law, however, required the Intelligence Ministry and the Intelligence Organization of the Islamic Revolutionary Guard Corps (IRGC) to certify that there is no “security problem” before approving citizenship.

On June 26, the Supreme Court issued a unanimous opinion that obliged the state compensation fund to pay the difference in Diya, a compensation paid to a victim’s family, between men and women in cases of death and bodily injuries.

Over the past two years, Iranian courts have handed down harsh sentences to dozens of women who protested compulsory hijab laws in Iran, as well as well-known human rights defenders, including Farhad Meysami and Reza Khandan, Sotoudeh’s husband, who supported their efforts.

On July 31, branch 31 of Tehran’s revolutionary court sentenced Yasman Ariani, her mother Monireh Arabshahi, and Mojgan Keshavarz, who were all arrested for protesting compulsory hijab laws, to 5 years for “assembly and collusion to act against national security,” one year for “propaganda against the state,” and 10 years for “encouraging and providing for [moral] corruption and prostitution.” The court sentenced Keshavarz to an additional seven-and-a-half years for “insulting the sacred.” If these sentences are upheld on appeal, each woman will serve at least 10 years of their sentence.

On August 27, the court sentenced Saba Kordafshari, a 22-year-old woman who was also arrested for protesting compulsory hijab, to 15 years in prison for “encouraging and providing for [moral] corruption and prostitution,” seven-and-a-half years for “assembly and collusion to act against national security,” and one-and-a-half years for “propaganda against the state.” If the sentences are upheld, she will have to serve at least 15 years.

On September 2, Sahar Khodayari, a 29-year-old woman who was arrested in March when she tried to enter a stadium to watch a football game, set herself on fire in front of the court after she was threatened with a six-month imprisonment. Khodayari was reportedly charged with “wearing improper hijab” and “confrontation with the police.” Her death sparked domestic and international outcry with activists as well as football players calling on the International Football Federation (FIFA) to pressure Iran to overturn the ban against women attending stadiums. On October 10, Iranian authorities allowed a limited number of seats for women—around 3,000 out of 85,000 in the stadium—for an international football match. Despite this important advance, the general ban on women attending Iran’s national league games remains.

Iranian law allows girls to marry at 13 and boys at age 15, as well as at younger ages if authorized by a judge. Efforts by a number of parliamentarians to increase the minimum age of marriage have been blocked by the judicial parliamentary commission.

Iranian law vaguely defines what constitutes acts against morality, and authorities have long prosecuted hundreds of people for such acts, as well as for consensual extramarital sex.

Under Iranian law, same-sex conduct is punishable by flogging and, for men, the death penalty. Although Iran permits and subsidizes sex reassignment surgery for transgender people, no law prohibits discrimination against them.

Iranian law denies freedom of religion to Baha’is and discriminates against them. Authorities continue to arrest and prosecute members of the Baha’i faith on vague national security charges, and close down or suspend licenses for businesses owned by them.  Iranian authorities also systematically refuse to allow Baha’is to register at public universities because of their faith.

The government also discriminates against other religious minorities, including Sunni Muslims, and restricts cultural and political activities among the country’s Azeri, Kurdish, Arab, and Baluch ethnic minorities.

People with disabilities face stigma, discrimination, and lack of accessibility when accessing social services, healthcare, and public transportation and may receive medical treatment, including electroshock therapy, without their informed consent. Local and national authorities have taken insufficient steps to address the situation.

During the 2018-2019 school year, only 150,000 out of an estimated 1.5 million children with disabilities of school age were enrolled in school, based on government figures, and more than half of them in special schools that segregated them from other students. Estimates put the total number of school-age children with disabilities in Iran at 1.5 million. One serious problem is a mandatory government medical test that deems some children with disabilities “uneducable” and excluded them from education all together. Other barriers include physical inaccessibility of school buildings, discriminatory attitudes of school staff, and lack of adequate training for teachers and school administrators in inclusive education methods.

The United States has increasingly targeted Iran with broad economic sanctions. While the US government has built exemptions for humanitarian imports into its sanction regime, banking restrictions have drastically constrained the ability of Iranian entities to finance such humanitarian imports, including vital medicines and medical equipment, causing serious hardships for ordinary Iranians.

In February, European Union foreign ministers adopted conclusions reaffirming support for and commitment to the Joint Comprehensive Plan of Action over Iran’s nuclear activities, and expressing concerns about the human rights situation in Iran. In April, the EU renewed for one year its targeted sanctions responding to human rights violations in Iran, which are in place since 2011.

In March and in September, the European Parliament adopted resolutions on the human rights situation in Iran, focusing on human rights defenders, women’s rights, and the situation of dual nationals in Iran. The resolutions called for the release of arbitrarily detained activists, as well as an amendment to article 48 of the country’s Criminal Procedure Law to ensure that all defendants have the right to be represented by a lawyer of their choice and to a fair trial.