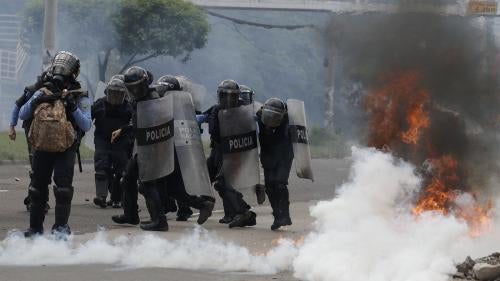 Violent crime is rampant in Honduras. Despite a recent downward trend, the murder rate remains among the highest in the world. Poverty, violence, and insecurity cause significant outflows of migrants and asylum-seekers. Human rights groups reported unjustified lethal force and other excessive use of force by security forces during a police and military crackdown on public protests between March and July. The crackdown left several people dead and many more injured. It was not clear how many of those killed or injured were victims of excessive force by authorities.

Journalists, environmental activists, and lesbian, gay, bisexual, and transgender (LGBT) individuals are vulnerable to violence. Efforts to reform public-security institutions have stalled. Marred by corruption and abuse, the judiciary and police remain largely ineffective. Impunity for crimes and human rights abuses is the norm.

The Mission to Support the Fight against Corruption and Impunity in Honduras (MACCIH), established in 2016 through an agreement between the government and the Organization of American States (OAS), has investigated a small number of cases involving corruption of senior officials. As of September, officials were debating whether to extend MACCIH’s mandate, which was set to expire at the end of 2019. In November, the Honduran government and the Secretary General of the Organization of American States (OAS), installed an evaluation board to review the performance of  MACCIH, prior to examining whether or not to extend its mandate.

In December 2018, the legislature approved a resolution to extend the mandate of a Special Commission for Police Reform Restructuring, charged with removing active members of the National Police who do not comply with their duties, through January 2022. As of June 2019, almost half of more than 13,500 police officers evaluated by the commission had been removed for acts committed during their tenure as officers. However, the commission has been criticized for its opacity and several of the almost 6,000 dismissed officers have been arrested by police for alleged criminal acts committed after their dismissal. This prompted the government in July to establish an elite police force tasked with monitoring the activities of dismissed police officers after they are purged from the institution.

In February, the National Anti-Corruption Council, an independent civil-society group, accused, before the Special Prosecution Unit Against Impunity for Corruption, former president Porfirio Lobo of misappropriating government funds during his presidency. In May, MACCIH announced that it was investigating Lobo for allegedly laundering drug money for his electoral campaign. Lobo denies the allegations.

In August, media reported that a court sentenced former First Lady Rosa Elena Bonilla, wife of ex-President Lobo, to 58 years in prison on corruption charges. It was the first conviction achieved by MACCIH.

In August, media reported that United States federal prosecutors had released documents implicating Honduran President Juan Orlando Hernández in a drug trafficking and money laundering conspiracy with his brother Juan Antonio Hernández. After a two-week trial in the US, in October, Hernández was convicted of drug conspiracy. He is set to be sentenced in January 2020. President Hernández, who has not been charged, has “categorically denied” the accusations.

Judges face interference from the executive branch and others, including private actors with connections to government. In August, the United Nations special rapporteur on the independence of judges and lawyers reported that four justices of the Constitutional Chamber of the Supreme Court were removed by Congress for political reasons and noted the lack of transparency in judicial appointments and lack of public scrutiny in the appointment of high officials.

Nationwide protests and strikes erupted in April over the approval of regulations to restructure the health and education systems. The regulations were repealed in April, but protests continued. More demonstrations followed over corruption allegations implicating President Hernández.

Local human rights organizations reported that the crackdown between March and July killed at least six people, wounded 80, and included 48 arbitrary detentions. The Office of the High Commissioner for Human Rights in Honduras (OACNUDH) and the Inter-American Commission on Human Rights (IACHR) expressed concern over reports that security forces fired live ammunition into demonstrations.

International press freedom organizations report that journalists continue to be targets of threats and violence, both by individuals and state agents.

The Honduran human rights ombudsman, CONADEH, reported that as of September 2019, 79 journalists had been killed since October 2001, and that 91 percent of those killings remained unpunished.

In March, gunmen in Nacaome killed Valle TV reporter Leonardo Gabriel Hernández in retaliation, police said, for Hernández’s work exposing organized criminal groups. Three other journalists had been killed in 2019 as of November.

In May, a new penal code was adopted that maintained the crimes of defamation, libel, and slander, all of which have been used to prosecute journalists for “crimes against honor.” In August, Congress announced that it would decriminalize those offenses, allowing only civil suits. As of November, Radio Globo director David Romero remained in prison, serving a 10-year sentence for defamation, according to the Honduran press freedom organization C-Libre. He was originally convicted in 2016, and the Supreme Court upheld the conviction in January.

Because of their vague and broad wording, other provisions of the new penal code could criminalize the lawful exercise of the rights to protest and assembly. This includes the crime of “public disturbances,” vaguely defined to include “violence or serious intimidation [that] frightens a population or part of it.” The code also uses overly broad language in defining the crimes of “illicit assembly,” “demonstrations,” and “terrorism.” In July 2019, the IACHR and OHCRH expressed concern over these provisions and called for their review. In November, the legislature postponed the entry into force of the penal code, which was planned for November 2019, to May 2020.

In February, Salomón Matute and his son Juan Samael Matute, both Tolupan indigenous persons who belonged to the San Francisco Locomapa tribe and the Broad Movement for Dignity and Justice (MADJ), died of gunshot wounds despite “precautionary measures” granted by the IACHR in 2013 to ensure the government protected them.

In October, María Digna Montero, a member of the Honduran Black Fraternal Organization (OFRANEH) and a defender of the indigenous Garifuna land and culture, was shot and killed in her home in Colón by unknown individuals.

In November 2018, a court found seven men guilty of the 2016 murder of environmental and indigenous-rights activist Berta Cáceres. Those convicted included a former chief of security for Desarrollos Energéticos SA (DESA), the company building the Agua Zarca dam, against which Cáceres had been campaigning at the time of her assassination.

Local activists have criticized the official Mechanism for the Protection of Journalists, Human Rights Defenders and Operators of Justice, created in 2015, for lacking uniform criteria in awarding protection measures and for being ineffective.

Violence based on gender identity or sexual orientation is widespread in Honduras. Several United Nations agencies working in Honduras have noted that violence against LGBT individuals forces them into “internal displacement” or to flee in search of international protection. The Honduras government keeps no data on killings based on sexual orientation or gender identity, but the Lesbian Network Cattrachas reported that between January and August 2019, at least 26 LGBT people had been killed. In one case documented by Human Rights Watch in June 2019, a transgender woman was killed and mutilated near San Pedro Sula in an apparent hate crime.

In March, a new adoption law that prohibits same-sex couples from adopting children went into effect.

Abortion is illegal in Honduras in all circumstances, including rape and incest, when a woman’s life is in danger, and when the fetus will not survive outside the womb. Under the new criminal code, women and girls who terminate pregnancies can face prison sentences of up to six years. The law also sanctions abortion providers.

The government also bans emergency contraception, or the “morning after pill,” which can prevent pregnancy after rape, unprotected sex, or a conceptive failure.

In 2017, the Honduran Congress unanimously passed a bill making all child marriage of those below the age of 18 illegal. The new bill replaces legislation that previously allowed girls to marry at 16 with permission from family. UNICEF reports that a third of all Honduran girls marry before 18.

CONADEH's Internal Displacement Unit reports that the forced recruitment of children by gangs or criminal groups is the fifth most frequent reason that Hondurans became internally displaced in the first semester of 2019. UNICEF has reported that no reliable statistics exist concerning how many children have been recruited into these groups.

Inhumane conditions, including overcrowding, inadequate nutrition, and poor sanitation are endemic in Honduran prisons. A December 2018 study by the National Committee on the Prevention of Torture, Cruel, Inhuman or Degrading Treatment, an official body, reported that the country’s prisons held 21,004 inmates, a figure double that of a decade earlier.

In January, a new migrant caravan started forming in San Pedro Sula, heading toward Mexico and the United States. Media reported that Honduran authorities obstructed and in some cases barred Hondurans from leaving the country by demanding identity documents, establishing checkpoints and blockades, and even teargassing the caravan. The IACHR expressed concern over the use of violence and other measures to prevent people from leaving the country, and urged Honduras to guarantee the migrants’ rights, including the right to leave any country.

In September, Honduras and the US signed an “asylum cooperation agreement” that requires Honduras to receive asylum-seekers who are referred by the US. Under the agreement, Honduras cannot return or remove the migrants until their asylum cases are resolved by the US federal authorities.

In March, the US State Department confirmed that it was halting aid to Guatemala, Honduras, and El Salvador, after President Donald Trump criticized Northern Triangle countries for their alleged lack of action in stopping the northbound caravans. In June, the US announced it was restoring some aid, but would halt new funding if countries failed to reduce migration to the United States. In October, the US announced the partial restoration of previously frozen foreign aid to Honduras, as well as to El Salvador and Guatemala, after all three countries entered into asylum cooperation agreements with the US.

In April, the IACHR brought a case against Honduras before the Inter-American Court of Human Rights concerning the extrajudicial execution of a transsexual woman and human rights defender in 2009, while a curfew was in force. The IACHR determined that the killing was prompted by prejudice toward her gender identity and expression. The court took into consideration the context of violence and discrimination against LGBT people in Honduras.

In May, the IACHR visited Honduras, as a follow up to its 2018 visit.

The UN special rapporteur on the independence of judges and lawyers visited Honduras in August 2019 and reported that “Honduras needs urgent Government action to strengthen national capacities to fight corruption and reinforce the independence of its judicial system.”

In August, the UN Working Group on Business and Human Rights visited Honduras to assess how the government and the business sector discharge their responsibility to prevent, mitigate, and remedy human rights abuses and negative impacts linked to business activity. The preliminary report documents that access to, use, and control over land by businesses is a recurring issue at the roots of many social conflicts.

In October, the IACHR published its report on the human rights situation in Honduras following a visit to the country in 2018. The report identifies institutional and human rights deficiencies, and highlights how lack of access to justice “has led to a structural impunity that perpetuates serious human rights violations.”