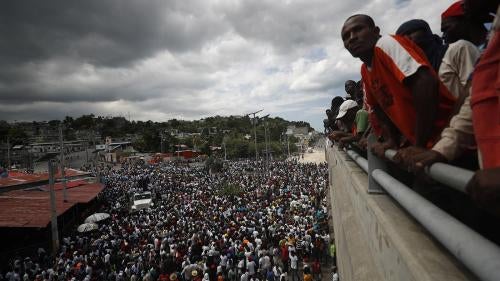 In July 2018, the government’s announcement that it would eliminate subsidies, allowing fuel prices to increase by up to 50 percent, led to widespread protests and the worst civil unrest the country has seen in years. In February 2019, demonstrations escalated after the government declared a state of economic emergency, with opposition groups demanding President Jovenel Moïse’s resignation amid allegations that he had mismanaged government funds designated for social programs. In September, anti-government protests grew in size and police responded in several cases with excessive force. At time of writing, Haiti was entering its 10th week of demonstrations and political clashes.

Haitians remain susceptible to displacement by natural disasters, including tropical storms and hurricanes. Over 140,000 households still need decent shelter more than three years after Hurricane Matthew caused, by various estimates, between 540 and 1,000 deaths. Nearly 9,000 more people were displaced in 2018, the majority due to housing destroyed by an earthquake in October.

As of January 2019, nearly 35,000 people, more than half of them women and children, lived in displacement camps formed after a 2010 earthquake. Authorities have not provided assistance to resettle them or return them to their places of origin.

The country’s most vulnerable communities continue to face environmental risks, such as widespread deforestation, pollution from industry, and limited access to safe water and sanitation. Some 2.6 million Haitians—approximately a quarter of the country’s population—live with food insecurity. Low rainfall chronically affects much of the country.

Since its introduction by UN peacekeepers in 2010, cholera has infected more than 820,000 people and claimed nearly 10,000 lives. However, intensified control efforts—including an ambitious vaccination campaign—have resulted in a significant decline in cases, from more than 41,000 suspected cases and 440 deaths in 2016 to just over 300 suspected cases and three deaths from January through April 2019.

Haiti’s prison system remains severely overcrowded, with many inmates living in inhumane conditions. Over 115 people died in Haitian prisons in 2018 and 19 died between March 1 and May 15, 2019. According to the former UN independent expert on Haiti, overcrowding is largely attributable to high numbers of arbitrary arrests and the country’s large number of pretrial detainees. As of May 2019, Haitian prisons housed just over 11,000 detainees, 73 percent of whom were awaiting trial.

Illiteracy is a major problem in Haiti. According to the UN Development Programme (UNDP), approximately one-half of all Haitians age 15 and older are illiterate. The quality of education is generally low, and 85 percent of schools are run by private entities that charge school fees that can be prohibitively expensive for low income families. Nearly 180,000 children and youth remain out of primary and secondary school throughout the country.

According to an investigation by the UN Mission for Justice Support in Haiti (MINUJUSTH), during October 2018 demonstrations police officers were responsible for three summary executions and 47 cases of excessive force that injured 44 protesters and killed another three. The MINUJUSTH report also notes that, during November 2018 protests, 21 casualties, including 6 deaths, allegedly resulted from police use of excessive force. In February 2019, as police sought to remove barricades and control massive anti-government demonstrations, clashes broke out and at least 34 people were killed and over 100 injured. Twenty-three police officers were also injured.

Between September 16 and October 17, the National Human Rights Defense Network (RNDDH) reported that at least eight journalists were injured during protests. Among those injured was an Associated Press photojournalist shot in the jaw by a Haitian senator who opened fire near the Senate building, and a cameraman for Radio Sans Fin shot in the wrist as police fired into a crowd. In October a radio journalist covering the protests was found shot dead in his car.

In November, the UN High Commissioner on Human Rights released a statement on the unrest, attributing at least 19 of the 42 deaths in protests since mid-September to government security forces.

RNDDH reported that at least 71 people were killed during a November 2018 massacre in the neighborhood of La Saline. Reports by the UN and the Haitian police in June indicated the involvement of two former Haitian National Police officers and two senior government officials. In September, as protests intensified, both government officials were removed from their posts.

Accountability for past human rights abuses continues to be a challenge in Haiti. As of November, a re-opened investigation into crimes committed by former President Jean-Claude Duvalier’s collaborators remained pending. Duvalier died in 2014, six months after the Port-of-Prince Court of Appeal ruled that the statute of limitations could not be applied to crimes against humanity and ordered that investigations against him should continue for crimes committed during his presidency (1971-1986). Allegations of violations include arbitrary detentions, torture, disappearances, summary executions, and forced exile.

There has been little progress toward passage of a criminal code reform submitted to parliament in April 2017 that would address some of these gaps in protection. The draft criminal code would also partially decriminalize abortion, which is currently prohibited in all circumstances, including in cases of sexual violence.

Among the survivors of the November 2018 La Saline massacre are 11 women and girls who were gang-raped and received no medical support or counselling.

Lesbian, gay, bisexual, and transgender (LGBT) people continue to suffer high levels of discrimination. In 2017, the Haitian Senate passed two anti-LGBT bills, which were under consideration by the Chamber of Deputies at time of writing.

One bill would regulate conditions for the issuance of the Certificat de Bonne Vie et Mœurs, a certificate of good standing required by many employers and universities as proof that a person has not committed a felony. The bill lists homosexuality, alongside child pornography, incest, and commercial sexual exploitation of children, as a reason to deny a citizen a certificate.

The other bill calls for a ban on same-sex marriage, as well as any public support or advocacy for LGBT rights. Should the ban become law, “the parties, co-parties and accomplices” of a same-sex marriage could be punished by three years in prison and a fine of about US$8,000.

As of mid-2018, more than 200,000 Haitians in the Dominican Republic reportedly were living without valid paperwork, at risk of deportation. During the first six months of 2019 alone, an average of more than 10,000 Haitians were returned to their country each month.

In the past decade, foreign investors have pursued the development of Haiti’s nascent mining sector. In 2017, the Haitian government presented a draft mining law to parliament. According to the Global Justice Clinic of New York University School of Law, the draft law is silent on the rights of individuals displaced by mining activities and grants insufficient time for adequate environmental review, restricting the government’s ability to study the documentation thoroughly and limiting opportunity for public participation or comment.

In addition, it contains provisions that could render all company documents, including those about environmental and social impacts, confidential for 10 years, preventing affected communities from engaging in meaningful consultation about mining projects. The draft law was awaiting consideration by parliament at time of writing.

MINUJUSTH, intended to help promote rule of law, police development, and human rights, was extended in April for a final six-month period. In October, the UN Security Council transitioned to a non-peacekeeping special political mission, the United Nations Integrated Office in Haiti (BINUH).

In 2016, the UN secretary-general apologized for the UN’s role in the cholera outbreak and announced intensifying efforts to treat and eliminate cholera and the establishment of a trust fund to raise $400 million to provide “material assistance” to those most affected by the epidemic. As of November 2019, only $27.7 million had been pledged to the effort.

In October, victims of the cholera outbreak petitioned the US Supreme Court to review the case of LaVenture et al v. United Nations in an effort to challenge the UN’s immunity in cholera lawsuits. The court decided not to hear the case.

In response to the UN’s La Saline massacre report, UN Secretary-General António Guterres commented in July that “[t]he allegations of complicity by at least two police officers and a representative of the State call for authorities to act swiftly to bring to justice those who are responsible for the crimes.”

In October 2018, a US federal judge issued a preliminary injunction temporarily blocking a decision by the Trump administration to terminate Temporary Protected Status (TPS) for Haitians effective July 2019. Termination would affect an estimated 60,000 Haitians who were permitted to stay in the US following the 2010 earthquake, including the parents of more than 27,000 children born to Haitians in the US under the program. In February 2019, the Trump administration announced that it would extend TPS for Haiti until January 2020.

In April, a second US federal judge issued a separate injunction blocking the administration’s plan to end TPS. In an effort to comply with these injunctions, in November the US Department of Homeland Security announced it would extend TPS for Haitians through January 4, 2021.

In 2019, Haiti endorsed the Safe Schools Declaration, an international commitment to protect education during armed conflict.