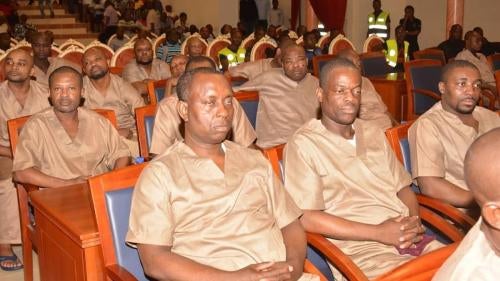 The vast majority of Equatorial Guinea citizens continued to be denied their economic and social rights, including access to health care and primary education, despite the country’s vast oil revenues, which benefit the political elite. In September, the government began negotiations for a $700 million loan request from the International Monetary Fund (IMF) despite boasting Africa’s third highest per capita income.

In June, against the backdrop of repression of civil society, the government reaffirmed its desire to join the Extractive Industries Transparency Initiative (EITI), a requirement of the IMF as a precondition for a loan. EITI requires transparency around oil, gas, and mining revenue and activities and respect for civil society. In July, authorities ordered the dissolution of the Center for Development Studies and Initiatives (CEID), the country’s leading civic group and a former civil society representative in the EITI steering committee. CEID’s vice president continued to face harassment.

In May, a court convicted 112 people for participating in a December 2017 coup attempt. Representatives of the American Bar Association who observed the trial reported serious due process violations, including confessions obtained through torture and severe restrictions on defense lawyers.

With approximately 1 million people, Equatorial Guinea, is among the region’s top oil producers. Yet it has failed to provide crucial public services to large segments of its population, lagging behind regional averages in health and education indicators. Based on available data, the country has among the world’s worst vaccination rates and one of highest rates of school-aged children out of school.

In June, the president’s son and minister of mines reaffirmed the government’s commitment to reapply to EITI, an initiative from which it was expelled in 2010, in part due to its failure to guarantee an “enabling environment” for civil society to fully participate in EITI’s implementation. The IMF has made submitting an application to EITI, as well as other governance-related requirements, a precondition for obtaining a loan.

Freedom of Expression and Due Process

The few private media outlets in the country are largely owned by people close to Obiang. Freedoms of association and of assembly are severely curtailed, and the government imposes restrictive conditions on the registration and operation of nongovernmental organizations (NGOs). Some of the few local activists who work on human rights-related issues faced intimidation, harassment, and reprisals.

On February 25, police arrested Joaquin Elo Ayeto, a member of a political opposition party and founder of a youth organization. A judge ordered him held in preventative detention, where he remained at time of writing. Ayeto told his lawyer that during the interrogation, police phoned someone who recounted hearing him making remarks critical of government spending, which appears to be the basis of his detention. He also showed his lawyers marks on his body from alleged police torture.

On March 15, police prevented Alfredo Okenve, a prominent human rights activist and vice president of CEID, from boarding a plane and seized his passport and phone. Okenve was supposed to receive a Franco-German human rights award at the French embassy that day, but tried to leave the country after learning that the police were looking to arrest him. Police returned him to his home and stationed a guard outside to prevent him from leaving for several days. This incident was the latest government effort to silence him. In October 2018, four assailants, apparently undercover security officers, brutally beat him; a year earlier, in April 2017, authorities arbitrarily detained him for two weeks.

In July, authorities formally ordered the dissolution of CEID. The government previously ordered it to suspend its activities in 2016 following comments made at a youth group it organized that were critical of the government.

The ruling Democratic Party (PDGE) has a virtual monopoly over political life. It holds all but one seat in the 170-member bicameral parliament, and the courts regularly intervene to ban or harass political opposition groups and their members. Under the constitution, the president is the first magistrate and has absolute power to appoint and dismiss judges.

On March 22, the Bata Provincial Court began a mass trial of approximately 130 people accused of participating in a December 2017 coup attempt. Many of the defendants had been held for more than a year without access to lawyers or relatives. The American Bar Association’s Center for Human Rights monitored and observed the trial. Juan Mendez, the former United Nations special rapporteur on torture, prepared a preliminary report documenting a litany of abuses.

The prosecution offered little or no evidence to support its case against most of the defendants, all of whom were charged with identical offenses; in some cases, it presented confessions that defendants testified in court were obtained under torture. The court, which included two military judges appointed mid-trial by President Obiang, placed severe restrictions on the defense, including prohibiting them from presenting evidence of torture and curtailing lawyers’ access to clients.

On May 31, the eight-judge panel convicted 112 defendants, handing down sentences ranging from 3 to 97 years, with 25 defendants receiving sentences of more than 70 years.

The international community, including the African Union, largely remained silent regarding these abuses. Several countries, including Switzerland, took legal measures to pursue corruption investigations into the country’s leaders or began the process of repatriating stolen assets.

On February 7, Swiss prosecutors closed an investigation into Teodorin Nguema, the vice president who is also the president’s eldest son, for corruption after he agreed to forfeit 25 cars worth approximately $25 million and pay $1.5 million to cover the cost of the investigation. In exchange, Swiss government relinquished a yacht worth $120 million it had seized. Swiss authorities had attempted to seize a second yacht, worth $130 million, but it was removed from its jurisdiction before authorities were able to do so.

The Swiss investigation was one of many into Nguema for corruption, money-laundering, and embezzlement. In October 2017, a French court convicted him in absentia of laundering tens of millions of dollars in France and seized his assets. He has appealed the case. In May, the French senate debated a bill that would require the government to repatriate corrupt assets it seizes as a first step to ensuring these funds are returned to the people of Equatorial Guinea.

In 2014, the United States Department of Justice settled a separate corruption case against Nguema after he agreed to forfeit $30 million to US authorities that would be repatriated for the benefit of Equatoguineans. The US is expected to determine which charities will receive the funds.

The corruption case before a Spanish court implicating several senior Equatoguinean government officials is expected to get to trial in 2020. The complaint alleged that the officials purchased homes in Spain through a private company that a US senate investigation revealed had received $26.5 million in government funds at around the time of the purchases.