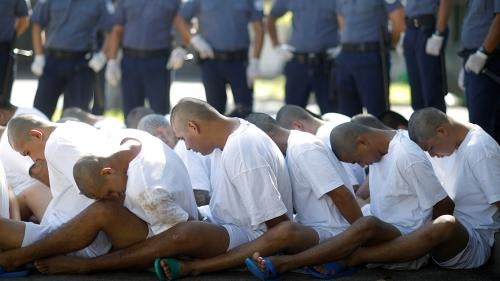 El Salvador has among the world’s highest homicide rates. Gangs exercise territorial control over specific neighborhoods and extort residents throughout the country. They forcibly recruit children and subject women, girls, and lesbian, gay, bisexual, and transgender (LGBT) individuals to sexual abuse. Gangs kill, disappear, rape, or displace those who resist. These conditions have resulted in internal and cross-border displacement.

Security forces remain largely ineffective in protecting the population from such violence. They also have been implicated in serious human rights violations, including extrajudicial executions, sexual assaults, other acts of torture and other ill-treatment, and enforced disappearances. Impunity for such violations remains the norm.

Girls and women accused of having abortions have been imprisoned for homicide and aggravated homicide. LGBT individuals face discrimination and violence with no effective state protection.

The trial continued against former military commanders accused in the 1981 El Mozote massacre, where soldiers committed mass rapes and killed 978 civilians, including 553 children.

Investigations reached hearings in only 14 of 48 cases involving 116 extrajudicial killings committed from 2014 to 2018 that the Salvadoran Ombudsperson for the Defense of Human Rights (PDDH) examined. Two resulted in convictions.

While in office, former Presidents Antonio Saca (2004-2009) and Mauricio Funes (2009-2014) used a “secret item” fund as one of several sources to embezzle hundreds of millions. In January 2019 the Attorney General’s Office (FGR) added a corruption charge to its case against Funes. Outgoing President Sanchez Cerén (2014-2019) and President Nayib Bukele, who took office in June 2019, have also spent money from this fund, but no evidence linking these actions to corruption had emerged as of September.

President Bukele continued the military’s role in public security operations, despite a 1992 peace accord stipulation against it. Media outlets widely reported that President Bukele’s choice for national police director has been investigated for threats and links to drug trafficking and groups that have engaged in assassinations.

The Central American University Human Rights Institute received seven reports of elite police units burning victims. In March, in a sugarcane field, agents of the National Civil Police’s Tactical Operation Section allegedly beat and strangled a blindfolded, handcuffed youth whom they suspected of gang membership or hiding weapons or drugs, and set fire to the field where they left him unconscious. Victims or witnesses of eight arbitrary arrests in two incidents in 2019 and late 2018 told Human Rights Watch of beatings at police barracks and threatened criminal charges for “illicit association,” a vaguely defined offense used to prosecute those suspected of gang membership.

In August, the Lethal Force Monitor, a collaborative investigation by researchers in five Latin American countries, reported that Salvadoran police and soldiers killed 1,626 people from 2010 through 2017. Authorities claimed that more than 90 percent of the victims were gang members and that nearly all were killed in “confrontations” or “shootouts.”

Also in August, the PDDH reported that it had examined killings of 28 boys, 7 women, and 81 men and found few resulted from confrontations. In 70 percent of cases, witnesses said victims were unarmed. In 37 percent, witnesses said they saw police move the body or place or hide evidence. In 30 percent, the body showed signs of torture, including sexual assault.

As of October 2019, the country’s jails, juvenile and youth facilities, and adult prisons  held 45,439 people in custody, more than twice the official capacity, according to the online database World Prison Brief.

In June, President Bukele extended to all prisons a “state of emergency” that the previous government had instituted in seven prisons in August 2018. He ordered 24-hour block confinement and, for the first time since 2004, mixed gang populations across prisons. Until then, each gang had been separated from others to avoid clashes. In September, he declared an end to the state of emergency, but it is unclear whether the policy was lifted in all prisons.

Approximately 60,000 gang members operate in at least 247 of the country’s 262 municipalities, according to media sources. They enforce their territories’ borders and extort and gather intelligence on residents and those transiting, particularly around public transport, schools, and markets.

Numerous security and elected officials have collaborated with gangs in criminal operations, media report, and all political parties have negotiated with them on daily operations, campaigns, and voting. A truce lasted from 2012-14 between the national government, 11 municipal governments, and the two largest gangs.

In 2016, the Legislative Assembly modified a counterterrorism statute to classify gangs as terrorist organizations. The law imposes prison sentences of up to 15 years on anyone who “solicits, demands, offers, promotes, formulates, negotiates, convenes or enters into a non-persecution agreement” with gangs.

In 2018, the FGR registered 3,664 victims of disappearance, abductions, and unexplained missing person cases, including 1,218 women and at least  24 boys and 29 girls. The 2018 figures included suspected abductions by criminal gangs and other cases in which people have gone missing in unexplained circumstances. Since 2010, the police have registered over 10,800 such cases. Because very few cases are investigated, knowledge of perpetrators is limited.

Since 1998, abortion has been illegal under all circumstances. Providers and those who assist face prison sentences of six months to 12 years.

Dozens of girls and women, mostly from high-poverty areas, were prosecuted in the past two decades for what lawyers and activists say were obstetric emergencies. In some cases, the courts accepted as evidence a questionable autopsy procedure known as the floating lung test to forensically support the claim that a fetus was delivered alive.

As of September, at least 16 women suspected of having abortions remained imprisoned on charges of manslaughter, homicide, or aggravated homicide. In March, a court commuted three women’s sentences as “disproportionate and immoral,” given that their families need them economically.

In August, the FGR tried Evelyn Hernandez a second time, in violation of due process, for aggravated homicide for a stillbirth in 2016 following her rape at age 17. The court found insufficient evidence to convict. In September, the FGR announced it would appeal the ruling. In the last decade, 40 other women have been freed after having sentences commuted or being found non-guilty.

LGBT individuals remain targets of homophobic and transphobic violence by police, gangs, and others.

In January, Camila Díaz Cordova, a transgender woman deported from the United States, was beaten to death. In July, the FGR charged three policemen with her kidnapping and aggravated homicide.

Although El Salvador introduced hate crimes into its penal code in September 2015, Salvadoran authorities told Human Rights Watch that to date, only two cases have been prosecuted as hate crimes. Human Rights Watch is not aware of any bias-related murders of known LGBT individuals that have resulted in conviction.

In January 2019, a judge in Zacatecoluca ruled in favor of a transgender woman seeking to change her name and gender marker on her identity document.

Journalists reporting on abuses of power or living in gang-controlled neighborhoods remain targets of death threats. Fake stories have circulated under the bylines of journalists who were not the authors, the Association of Journalists of El Salvador reported.

Throughout his election campaign, President Bukele accused media, including El Faro and Revista Factum, which have received journalism’s highest prizes in El Salvador, of lacking objectivity. The presidential press office barred their reporters from a September press conference.

In 2019, police prevented press from covering a veteran’s protest, from visiting homicide scenes, and from the presidential election and inauguration. Police threatened journalists who resisted orders to turn over equipment or to erase photos. Four journalists told Human Rights Watch that, since June, police have required presidential press office approval before discussing details of homicides.

Large numbers of people in El Salvador are internally displaced by criminal violence, extortion, and other threats. One study estimated the number of displaced in 2017 to be nearly 300,000.

In 2018, Salvadorans had 101,000 pending asylum applications in the US, the most of any nationality. Approximately 129,500 had applications pending in other countries.

Salvadoran press reported at least 11 people murdered after deportation back to El Salvador in 2019.

In fiscal year 2019, the US disbursed over $62 million in bilateral aid to El Salvador.

In July, the FGR began collaborating with Canada and the United Nations Office on Drugs and Crime to improve its response to disappearances by creating a special FGR unit, working with police to consolidate collection of statistics, and urging the addition of “disappearance” and “aggravated disappearance” to the criminal code.

In September, President Bukele requested support from the UN and the Organization of American States to investigate and prosecute corruption.