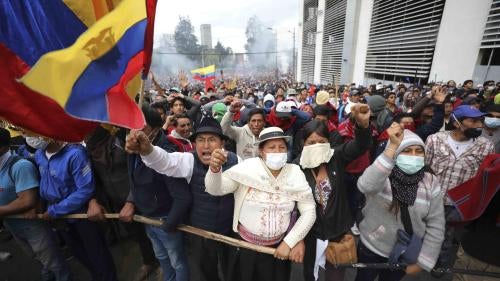 On October 3, 2019, protests erupted after President Moreno signed a decree establishing austerity measures that eliminated fuel subsidies. Taxi and bus drivers, student groups, and thousands of indigenous people took to the streets in response, resulting in days of unrest. Some demonstrators engaged in serious acts of violence. In response, the government declared a national state of emergency, suspending the rights to freedom of assembly and association and later restricting the right to freedom of movement throughout the country. Some security forces allegedly used excessive force. The state of emergency was lifted by President Moreno on October 13. According to the Ombudsman’s Office, 10 people died in the context of the protests.

President Moreno has taken steps to restore freedom of expression, which was severely damaged under former President Correa. With President Moreno’s support, the National Assembly in 2018 amended a 2013 communications law that had given the government broad powers to limit free speech. Legislators eliminated the Superintendency of Information and Communication (SUPERCOM), a regulatory body that had been used to harass and sanction independent media outlets. But the amended law includes problematic provisions such as one treating “communications” as a “public service” and one giving anyone who can show that media published inaccurate or damaging content about them an unrestricted right to a published correction and an opportunity to respond.

In 2018, three Ecuadoreans investigating violence along the Ecuador-Colombia border for El Comercio newspaper were abducted by Colombian guerrillas, their bodies subsequently found in Colombia. In 2018, an Inter-American Commission on Human Rights (IACHR) investigative support team reported “no satisfactory progress” on the case by Ecuador’s Attorney General’s Office. In November, the IACHR president announced that the final IACHR report on the case would be presented by the end of the year.

Corruption, inefficiency, and political interference have plagued Ecuador’s judiciary for years. During the Correa administration, high-level officials and Judiciary Council members interfered in cases that touched on government interests, and in the appointment and removal of judges.

Under President Moreno, a transition Council of Citizen Participation (CCP), appointed after a popular referendum in 2017, removed Judiciary Council members they determined to have created a system favoring government interests. The transition CCP was tasked with evaluating the performance of key state institutions and authorities and was empowered to replace them.

During its review of the Constitutional Court, the transition CCP removed all of the existing justices and left their positions vacant for several months. In early 2019, following a rigorous selection process provided for in Ecuadorean law, a permanent Constitutional Court was appointed.

In May, the permanent CCP, elected by popular vote, announced that it would review the performance and appointment of the new Constitutional Court justices. In response, the National Assembly removed four permanent CCP members from office, accusing them of exceeding their powers. In July, the CCP reversed its decision.

The legal framework that allowed for political interference in the judiciary under President Correa remains in place. Ecuador’s Organic Code on Judicial Function allows the Judiciary Council to suspend or remove justice officials, including judges, for acting with “criminal intent, evident negligence or inexcusable error.” This broad rule, used to suspend or remove 145 judges between January 2013 and August 2017, exposes judges to political pressure and undermines judicial independence. From January through August 2019, 19 judges were removed for “inexcusable errors,” after a higher court ruled they had made serious mistakes. At time of writing, the Constitutional Court was evaluating the rule’s constitutionality.

Constitutionally, indigenous peoples have a collective right to “free prior informed consultation” regarding development of nonrenewable resources located on their lands and that could affect them environmentally or culturally. This constitutional requirement differs from the international standard calling for indigenous peoples’ free, prior, and informed consent to all measures affecting them, including projects affecting their ancestral lands. For years, indigenous peoples have been saying they are not being duly consulted regarding exploitation of their ancestral lands.

In April, a Pastaza court invalidated the Ecuadorean government’s 2012 consultation with the Waorani people before the auctioning of lands to oil companies. The court halted operations after finding that Ecuador had not complied with the constitutional duty to obtain free, prior and informed consultation from the Waorani.

In September, an appeals court in Pastaza Province ruled in favor of the Kichwa people’s complaint that authorities had disregarded their constitutional right to prior consultation on a hydroelectric project in the Ecuadorean Amazon.

Overcrowding, poor conditions, and violence inside prisons are longstanding problems.  In May, President Moreno declared a state of emergency to “protect the rights of people deprived of liberty.” The decree suspended certain prisoners’ rights, including freedom of association and information, and provided for the police and armed forces to coordinate efforts and assign personnel to prisons.

A gunfight among inmates of the Litoral Prison in Guayaquil, in May, resulted in six prisoners’ deaths. The ombudsman blamed “overcrowding and the inexistence of a government security policy.”

A truth commission created by the Correa administration to investigate government abuses from 1984 to 2008 documented gross human rights violations against 456 victims, including 68 extrajudicial executions and 17 disappearances. A special prosecutorial unit created in 2010 has initiated judicial procedures in fewer than 15 cases. Final rulings have been rendered in only two. The remaining cases appear stalled.

The right to seek an abortion is limited to instances in which a woman’s health or life is at risk, or the pregnancy results from rape of someone with a psychosocial disability. For illegal abortions, prison sentences range up to two years. Fear of prosecution drives some women and girls to have illegal, unsafe abortions and impedes access to services for survivors of sexual violence. In September, the National Assembly rejected a proposal to decriminalize abortion in cases of rape.

A 2012 government survey revealed high rates of gender-based violence, with an estimated 1 in 4 women facing sexual violence in the course of a lifetime. A high rate of rape of adolescent girls is of particular concern. Approximately 2,000 girls under 14 give birth in Ecuador each year. All are considered pregnancies from rape, because 14 is the age of sexual consent.

From January 2014 through August 2019, the government recorded 343 femicides, with 141 convictions; 32 were committed in 2019. Ecuador’s criminal code defines femicide as the exercise of power relations resulting in the death of a woman for “being a woman.”

From January 2014 until June 2018, Ecuador’s Ministry of Education received 4,111 complaints of sexual violence against students; 1,837 were school-related. It also reopened 734 complaints that had been archived or suspended by the ministry.

Since 2017, the government has taken important steps toward tackling school-related gender-based violence, launching public information campaigns, training programs, and a database to document all cases of sexual violence in schools.

In a February 2018 referendum, voters overwhelmingly supported a proposal to remove a constitutional statute of limitations for sexual offenses against children under 12 and adolescents aged 12 to 18. At time of writing, the government had not presented legislation to enact the change.

The constitution defines marriage as “between a man and a woman,” but the Constitutional Court ruled in June in favor of same-sex marriage, citing international law and constitutional provisions protecting against discrimination. In July, the Civil Registry registered the first same-sex wedding.

In February, the Ministry of Labor shut down Furukawa Plantaciones, which had produced manila hemp, whose fiber is used for a variety of paper products. The ombudsman had documented labor exploitation and grave human rights violations against mostly Afro-Ecuadorean (“afrodescendientes”) families who lived on site and had worked for the company for decades. In April, the ombudsman issued a follow-up report emphasizing omissions by state institutions, including failure to investigate and sanction possible criminal conduct.

Ecuador has been receiving a huge influx of Venezuelan exiles, many passing through to other countries. The United Nations High Commissioner for Refugees reported that, as of November, 385,042 Venezuelan migrants and refugees were living in Ecuador.

In January, in response to a Venezuelan man’s murder of a young pregnant woman in the northern city of Ibarra, Ecuador announced new requirements for Venezuelans to enter. These included certified background checks for criminal records and official Venezuelan ID cards. A series of xenophobic violent attacks and harassment against Venezuelans followed.

Although the Constitutional Court temporarily suspended the entry requirements while it evaluated them, the government in August announced a two-year humanitarian temporary residence visa for Venezuelans that includes requirements that in practice make it difficult for Venezuelans to apply.

President Moreno continues to rebuild relations with the Inter-American human rights system.  In November, the IACHR held public and private sessions in Quito.

In April, Ecuador terminated the asylum it had granted to Wikileaks founder Julian Assange in 2012 and invited British police to apprehend him at its embassy in London. Assange’s asylum was predicated on the risk of being extradited to the US for publishing classified documents leaked by Chelsea Manning; the US asked the UK to extradite Assange shortly after he was in British custody. Following Assange’s arrest, Ecuador allowed the US to search the embassy apartment and confiscate documents, digital files, and devices they found. Spain’s National Court is investigating the private security firm retained by Ecuador for hiding microphones and cameras throughout the apartment, including the toilet where Assange tried to hold private conversations with his attorneys. Ecuador gave as reasons for withdrawing asylum his deportment in the embassy and his publication of politically embarrassing materials.

In September, the UN special rapporteur on the right to health visited Ecuador. The special rapporteur noted that women and girls, children and adolescents, members of LGBTI communities, people living with HIV/AIDS, and people on the move still face specific challenges in realizing their right to health, and stated that “violence against women and girls is endemic in Ecuador.”

The Moreno administration has continued to raise concerns about ongoing human rights abuses in Venezuela. In April, President Moreno urged a “speedy transition in Venezuela that will lead to general elections as soon as possible, and guarantee the human rights of all.”

By invitation of the Ecuadorean government, delegations from the IACHR and the Office of the UN High Commissioner for Human Rights visited the country in late October to look into allegations of human rights violations in the government response to the October protests. Their final reports were pending at time of writing.