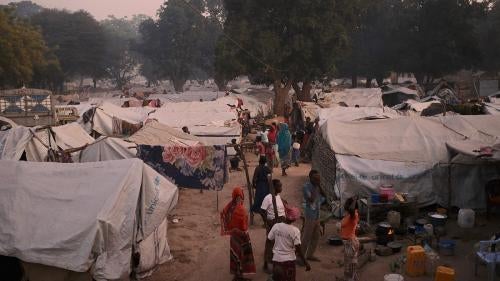 A Political Agreement for Peace and Reconciliation was signed between the government of the Central African Republic and 14 armed groups in Bangui in February. As part of the agreement, a new government was formed, with several members of armed groups appointed to senior positions, including rebel leaders against whom there is credible evidence of responsibility for atrocities in recent years. The deal was the sixth signed since the crisis started in late 2012 and represents the greatest effort by both international and national actors to include all relevant parties to date.

Despite the peace deal, armed groups committed serious human rights abuses against civilians country-wide in 2019, with more than 70 percent of the country remaining under their control. Fighting between predominantly Muslim Seleka rebels, anti-balaka militias, and other armed groups forced thousands to flee their homes as fighters killed civilians and looted and burned properties. The most serious incident occurred on May 21, when fighters of rebel group Return, Reclamation, Rehabilitation, or 3R, killed 46 civilians in coordinated attacks in Ouham-Pendé province.

Tensions escalated in Bangui when representatives of a political platform known as E Zingo Biani), comprising of leaders from civil society organizations and opposition parties, criticized the government for appointing leaders of armed groups to key official positions. Between April and June, the platform made several calls for demonstrations, which authorities prohibited. During one demonstration, which had been banned, members of the Central Office for the Repression of Banditry violently assaulted and arrested two French journalists and a Central African political opponent.

In August and September, two rebel leaders, Mahamat al-Khatim, head of the Patriotic Movement for the Central African Republic (MPC), and 3R commander, Sidiki Abass, resigned from their government positions.

Some local courts rendered convictions of armed group leaders implicated in serious crimes, and seven investigations were pending before the Special Criminal Court (SCC), a new war crimes court based in Bangui staffed by national and international judges and prosecutors and operating with substantial UN assistance. The SCC remained underfunded.

The International Criminal Court (ICC) continued its second investigation of crimes committed in the country related to the current conflict, which started in late 2012. In September, the ICC held hearings on whether to confirm charges against two suspects associated with the anti-balaka militias, Patrice-Edouard Ngaïssona and Alfred Yékatom.

In January, fighting broke out between UN peacekeepers and fighters from the Union for Peace in the Central African Republic (UPC), when UPC fighters killed two policemen in Bambari ahead of a visit by the country’s president. The fighting resulted in a UN attack on a large UPC base at Bokolobo, 60 kilometers south of Bambari, and left several people dead and wounded.

In April, UPC also attacked several villages between Kouango and Mobaye, in Ouaka and Basse-Kotto provinces, leading to the displacement of at least several thousand civilians.

On April 28, violence erupted in Amo village in Kemo province, when a local militia attacked members of the minority Peuhl community, killing seven people, including two children, and forcing scores of civilians to flee the area. The attack was in response to a Peuhl attack on a local resident the same day.

The most serious incident since the signing of the peace agreement occurred on May 21 when fighters from the armed group 3R killed at least 46 civilians in three attacks in the villages of Bohong, Koundjili, and Lemouna, in Ouham Pendé province. The 3R commander, Gen. Sidiki Abass (also known as Bi Sidi Souleymane), was appointed military adviser to the prime minister in March by presidential decree, but resigned from the post in September. 3R also looted properties in Bohong. On May 24, Abass handed three men whom he claimed were responsible for the killings in Koundjili and Lemouna to local authorities and MINUSCA. The men were detained in Bangui awaiting trial. In August, the Special Criminal Court took over the file of serious crimes committed in Lemouna, Koundjili, and Bohong from the national Attorney General’s Office.

Violence erupted in the capital Bangui in July, when clashes between traders and self-defense groups in PK5 neighborhood killed at least 11 civilians.

Following the signing of the peace deal, humanitarian actors were able to operate more freely and safely across the country, as well as to deliver assistance to previously inaccessible areas. However, the operating environment for humanitarians remained challenging and the Central African Republic continues to be one of the most dangerous countries in the world for humanitarian actors. According to the United Nations, there were 244 incidents directly affecting humanitarian personnel or property from January to October, leading to at least 3 deaths.

In some areas, there were reports of spontaneous voluntary returns of internally displaced persons; however, fighting and attacks by armed groups continued to force tens of thousands of people to flee their homes throughout 2019. Fighting between the Popular Front for the Renaissance of the Central African Republic (FPRC) and the Movement of Central African Liberators for Justice (MLCJ) in Birao in September caused the displacement of around 14,000 civilians.

About 2.6 million people, out of a population of 4.6 million, needed humanitarian assistance, but the humanitarian response plan remained underfunded, with a budget gap of around US$206 million in September.

The UN peacekeeping mission, MINUSCA, deployed 10,833 military peacekeepers and 2,050 police across many parts of the country.

Under Chapter VII of the UN Charter, the mission is authorized to take all necessary means to protect the civilian population from threat of physical violence and to “implement a mission-wide protection strategy.”

In September, the UN Security Council adopted a resolution easing the UN arms embargo and extending a modified sanctions regime against the Central African Republic through January 2020. The resolution outlined details on the types of weapons and lethal equipment permitted pursuant to previous resolutions. In addition, it decided that the supplying member state is primarily responsible for notifying the Central African Republic Sanctions Committee responsible for overseeing sanctions imposed by the UN Security Council at least 20 days in advance of delivery of any supplies. Russia continued training and re-arming the national army.

In September, the UN Human Rights Council decided to continue the mandate of the Independent Expert on the Central African Republic for another year.

Justice for War Crimes and Crimes Against Humanity

Rendering justice for serious crimes continued to be a key challenge in 2019.

After a slow start since the SCC was established in 2015, the court’s special prosecutor opened four investigations from 22 priority cases he identified, and the judges conducted investigations into three cases, which were transferred from the ordinary courts. The special prosecutor also examined 27 complaints that individuals submitted to the SCC.

The level of court staff overseeing investigations is limited, and additional prosecutors and judges are needed. The court needs programs that do not yet exist in the country’s domestic system, including witness and victim protection and support, legal assistance for accused and victims, and outreach to affected communities. Ensuring adequate security for court premises, staff, and witnesses and victims remained one of the most significant challenges during the year, as much of the country remained under the control of armed groups.

As of July 10, the court had a funding gap of approximately US$1 million for 2019 operations, and no funds pledged for future years, anticipated to cost approximately $12.4 million annually.

The Office of the Prosecutor at the ICC continued its second investigation into the situation in the Central African Republic, into alleged war crimes and crimes against humanity committed in the country since 2012. The ICC combined proceedings against Alfred Yékatom, known as “Rambhot,” and Patrice-Edouard Ngaïssona began in September. Central African Republic authorities surrendered Yékatom, an anti-balaka leader, to ICC custody in November 2018. Ngaïssona, also an anti-balaka leader, was transferred to ICC custody in January, after he was arrested in France in December 2018. A decision on whether to confirm the charges against Ngaïssona and Yékatom was expected by the ICC judges in early 2020.