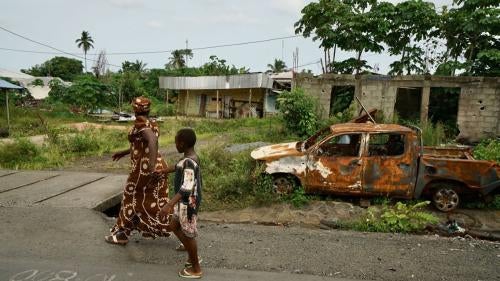 Armed groups and government forces committed widespread human rights abuses across Cameroon throughout 2019. Freedom of expression, association, and assembly continued to be curtailed after President Paul Biya, 86, won his seventh term in October 2018, in elections marred by low voter turnout and allegations of fraud. The government denied a Human Rights Watch researcher entry to the country in April.

The Islamist armed group Boko Haram carried out over 100 attacks in the Far North region since January 2019 killing more than 100 civilians. The conflict between government forces and Boko Haram has killed thousands of Cameroonians and displaced over 270,000 since 2014, leading to the rise of self-defense vigilante groups.

In Anglophone regions, violence intensified as government forces conducted large-scale security operations and armed separatists carried out increasingly sophisticated attacks. Over 3,000 civilians and hundreds of security forces personnel have been killed in the Anglophone regions since 2016, when the crisis started. The unrest in these regions led to the displacement of over half-a-million people. In August, 10 leaders of a separatist group, the Ambazonia Interim Government, were sentenced to life by a military court, following a trial that raised concerns of due process and violations of fair trial rights.

Government forces and armed separatists have killed, violently assaulted, or kidnapped people with disabilities as they struggled to flee attacks, or because they were left behind.

Cameroonian authorities cracked down on the political opposition, violently broke up peaceful protests, and arrested hundreds of opposition party leaders, members, and supporters. 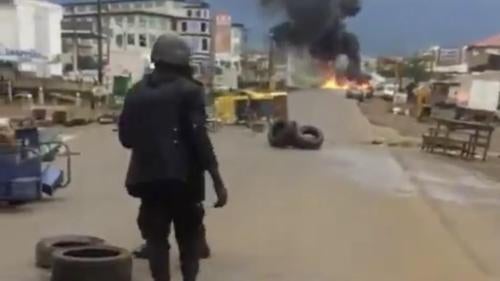 Cameroon’s Anglophone regions have been engulfed in crisis since late 2016, when English-speaking lawyers, students, and teachers began protesting what they saw as their under-representation in, and cultural marginalization by, the central government.

On September 10, amid increasing violence and following sustained international pressure, President Biya called for a “national dialogue,” a series of nationwide discussions aimed at addressing the Anglophone crisis. The dialogue ended with the adoption of a special status for the two Anglophone regions and the release of hundreds of political prisoners, including Maurice Kamto, leader of the opposition Cameroon Renaissance Movement (MRC), and other people arrested in connection with the unrest in the North-West and South-West regions.

Responding to increasing attacks by armed separatist groups, security forces killed scores of people, burned hundreds of homes and other property in villages and cities across the North-West and South-West regions, and tortured suspected separatists in detention.

On February 6, security forces, including soldiers of the Rapid Intervention Battalion (BIR), stormed the market in Bole Bakundu village, South-West region, killing up to 10 men.

On April 4, Cameroonian soldiers, gendarmes, and BIR members carried out a deadly attack on the North-West region village of Meluf, killing five civilian males, including one with a mental disability, and wounding one woman. The forces also forcibly entered at least 80 homes in Meluf, looted some, and burned down seven.

On May 15, Air Force and BIR soldiers attacked Mankon, Bamenda, North-West region, burning over 70 homes and killing a man. On July 10, Air Force soldiers went back to Mankon and killed two men.

During the year, there was widespread use of incommunicado detention and torture of people suspected of ties to armed separatist groups at the State Defense Secretariat (Secrétariat d’Etat à la défense, SED) prison in Yaoundé. Gendarmes and other security personnel at the SED used torture, including severe beatings and near-drowning, as well as other ill-treatment to force suspects to confess to crimes, or to humiliate and punish them.

While the government maintained it did not tolerate crimes committed by security forces, it failed to demonstrate progress in investigating and punishing them.

On February 16, a group of armed separatists abducted 170 students, mostly girls under 18, a teacher, and two guards from a boarding school in Kumbo, North-West region. They were all released the following day amid rumors of ransoms being paid. The school remained closed at time of writing.

Human Rights Watch authenticated a video showing armed separatists in mid-May torturing a man in an abandoned school in Bali village, North-West region. The school has been closed since mid-2017 due to violence and the separatists’ enforced boycott of education. Armed separatists have used schools as bases, deploying fighters and weapons and holding people hostage in and near them.

On June 18, separatists kidnapped at least 40 people, including women and children, beat and robbed them in Bafut, North-West region. They were released the following day.

Since elections in October 2018, the government has increased its crackdown on political opposition. Cameroon security forces have used excessive and indiscriminate force to stop demonstrations organized by the members and supporters of the MRC, Cameroon’s main opposition party.

In January, MRC leader Maurice Kamto and some of his closest allies were arrested with another 200 MRC members and supporters after they held country-wide protests. A trial started in August, as they remained in detention on politically motivated charges.

On April 5, the Ministry of the Territorial Administration issued a press release banning a week of demonstrations planned by the MRC, accusing the party of destabilizing the country.

Between June 1 and 2, at least 350 MRC members and supporters, including its vice president, were arrested across the country after they tried to hold demonstrations.

On September 25, gendarmes arrested Abdul Karim Ali, an outspoken Anglophone activist and political analyst, in Yaoundé. Abdul Karim was detained at SED and denied access to a lawyer for five days. He was released on November 1.

In November, authorities banned three MRC meetings in the cities of Ebolowa, Yaoundé, and Douala. Defying the meeting ban, hundreds of MRC supporters gathered in the capital, Yaoundé, on November 2 before anti-riot police violently dispersed them. Police severely beat and injured at least 10 demonstrators. Thirty-three MRC members and supporters were arrested but released the same day.

Cameroon’s penal code punishes “sexual relations between persons of the same sex” with up to five years in prison, and its cybercrimes law punishes “whoever uses electronic communication devices to make sexual advances toward a person of the same sex”  with up to two years in prison. Police and gendarmes continued to arrest and harass people they believe to be lesbian, gay, bisexual, or transgender (LGBT). Humanity First Cameroun and Alternatives-Cameroun, two nongovernmental organizations (NGOs) working on LBGTI issues, reported that 60 people were arrested on the basis of their sexual orientation or gender identity in 2018, while over 200 were subjected to physical violence.

In a March letter to Human Rights Watch, government officials said that about 30 cases were pending before the Military Courts in Bamenda and Buea for crimes committed by security forces, including torture, destruction of property, violation of orders, and theft. Officials added that, while investigations were conducted, information about them are confidential. However, the visible lack of accountability appears to have fueled abuses, including killings, destruction of property, and torture.

The trial of seven soldiers allegedly caught on video carrying out the 2015 execution of two women and two children in the Far North region started in August, however hearings have been delayed several times, including following a request by defense lawyers to hold the trial behind closed doors.

In May, authorities announced an investigation into the burning of at least 70 homes allegedly carried out by security forces in Mankon, Bamenda, on May 15, as well as the establishment of a commission of inquiry to evaluate the material damage and property destroyed. The commission was due to submit its report by May 24, but authorities have made no information about the findings public.

France, the United States, the United Kingdom, and Germany are Cameroon’s principal partners, primarily in the context of operations to counter Boko Haram in the country’s Far North region. Both France and the US provide Cameroon with significant military and security assistance and training.

In February, the US announced the scaling back of its security assistance to Cameroon following credible allegations that the Cameroonian military carried out human rights violations. In July, Germany also announced the end of its military cooperation with Cameroon. In October, the US announced to cut Cameroon trade privileges enshrined in the African Growth and Opportunity Act (AGOA) over rights abuses.

The international community has become increasingly aware of the serious crimes in the Anglophone regions, despite Cameroonian government efforts to prevent coverage and documentation of violations. The United Nations high commissioner for human rights visited Cameroon in May, expressed concerns over allegations of serious human rights violations and urged the government to conduct transparent investigations. A fact-finding mission by her office took place in September.

The US, UK, and France publicly raised concerns on the situation in the Anglophone regions and the restrictions on basic rights and freedoms. In March, the UK, on behalf of 38 members of the Human Rights Council, expressed its deep concern about the deteriorating human rights situation in Anglophone regions, and called on Cameroon to engage fully with the UN Office of the High Commissioner for Human Rights. On April 4, the European Union Parliament passed a resolution expressing concerns over abuses committed in the North-West and South-West regions of the country, and called on President Biya to release opposition party leader Kamto and all other detainees held on politically motivated charges.

In May, the UN Security Council convened an informal meeting on the humanitarian situation in Cameroon, amid resistance from the Cameroonian government and the council’s three African members.