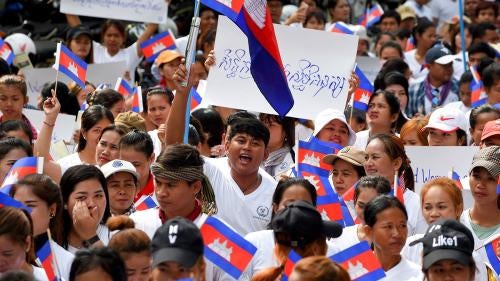 Respect for human rights in Cambodia deteriorated in 2019, following national elections the previous year in which Prime Minister Hun Sen and the ruling Cambodian People’s Party (CPP) secured all 125 National Assembly seats after the CPP-controlled Supreme Court dissolved the main opposition party, effectively creating one-party rule. The number of political prisoners also increased, with key opposition figures either in detention or having fled the country to avoid arrest. Authorities criminalize involvement with the main  opposition party, the Cambodia National Rescue Party (CNRP); 107 out of 118 senior CNRP politicians remained banned from engaging in politics for five years.

In mid-November 2019, the government held around 90 people in pretrial detention or prison on politically motivated convictions. While Hun Sen sought royal pardons for 16 political prisoners after the 2018 elections to deflect international criticism, targeting of peaceful dissent continued in 2019, and other human rights defenders and political opposition activists were tried and imprisoned in 2019.

The European Union (EU) launched a review procedure for suspension of the “Everything But Arms” (EBA) trade preferences granted to Cambodia based on the latter’s non-compliance with international human rights treaties and core International Labour Organization conventions. At risk is Cambodia’s tariff-free access into the European Union market of certain exported goods, such as garments. The EU’s decision should be final by February 2020.

A series of new repressive laws or amendments to existing laws—including amendments to the Law on Political Parties, the Law on Non-Governmental Organizations, the Law on Trade Unions and a lese majeste clause in the penal code—severely restrict rights to freedom of expression, peaceful assembly, and association.

In December 2018, a court convicted six prominent union leaders on baseless charges of initiating intentional violence and causing damage, handing them suspended prison sentences of between eight months and four-and-a-half years and a collective 35 million Cambodian riels (US$8,600) compensation payment to civil parties. An appeals court overturned the convictions in May 2019, just ahead of the arrival of an EU fact-finding mission related to the EBA review.

In December 2018, Thai authorities forcibly returned Cambodian dissident Rath Rott Mony to Cambodia. Authorities then prosecuted him for his role in a Russia Times documentary “My Mother Sold Me,” which describes Cambodian girls forced by their mothers into sexual exploitation. In July, the court convicted Mony of “incitement to discriminate” and sentenced him to two years in prison.

Since the introduction of a lese majeste crime in 2018, three people have been convicted and imprisoned under the law; a fourth person was being held in pretrial detention at time of writing. All the cases involved people expressing critical opinions of the government and the king on Facebook, or sharing other people’s Facebook posts.

In July 2019, authorities detained two youth activists, Kong Raya and Soung Neakpoan, for participating in a commemoration ceremony on the third anniversary of the murder of prominent political commentator Kem Ley in Phnom Penh. In November, the Supreme Court denied Raya bail. Authorities charged both with “incitement to commit a felony.” They arrested seven people for commemorating the anniversary; and disrupted or canceled commemorations around the country.

On January 20, 2019, soldiers arrested land activist Sum Moeun in Preah Vihear and detained him at the Kulen Promtep Wildlife Sanctuary Headquarters. Authorities could not account for his whereabouts the next morning. Two months later, he reappeared out of hiding after having escaped the Sanctuary, waiting to receive assurances that he will not be re-arrested. Fourteen other villagers, including his son, were arrested and charged with illegal clearing of state forest land; the charges against four were dropped and the ten others were released on bail between June and July, their charges are pending. While Moeun had not been re-arrested, a trial against him started in October based on same charges as the fourteen.

On January 6, 2019, an amendment to the Law on Political Parties gave Prime Minister Hun Sen unfettered discretion to decide which of the initial 118 banned senior CNRP members could regain their political rights. The amendments provide that political rights can be restored only if the individual first submits a request to Hun Sen or Interior Minister Sar Kheng, which is then passed on to the king. Less than a dozen banned CNRP members have made such a request; the rest have refused to submit to what they maintain is a politicized and arbitrary process.

On November 10, 2019, the investigating judge decided to lift CNRP leader Kem Sokha’s restrictive judicial supervision, amounting to house arrest, upon the condition that he refrain from political activities and from travelling abroad and be cooperative in his continuing investigation into bogus treason charges. Kem Sokha had been in arbitrary detention for over two years. If convicted of treason, he faces up to 30 years in prison.

On March 12, 2019, a court issued arrest warrants on charges of “conspiring to commit treason” and “incitement to commit felony”  for eight leading members of the CNRP who had left Cambodia ahead of the July 2018 election—Sam Rainsy, Mu Sochua, Ou Chanrith, Eng Chhai Eang, Men Sothavarin, Long Ry, Tob Van Chan, and Ho Vann. On September 26, a Phnom Penh court charged them.

Between January and May 2019, Cambodian authorities issued over 147 arbitrary court and police summonses against CNRP members or supporters. Summonses seen by human rights groups lack legal specifics, containing only vague references to allegations that the person summoned may have violated the Supreme Court ruling dissolving the CNRP. Between August and November, authorities arrested and detained over 60 opposition members and supporters based on different spurious charges and charged over 100. On August 16, acting and exiled CNRP leader, Sam Rainsy announced his return to Cambodia on November 9; however, based on a number of restrictive measures adopted by Hun Sen, including the closure of land border crossings and arrest warrants sent to ASEAN governments, CNRP leadership was prevented from entering the country—a blatant violation of their human rights.

On January 16, 2019, police arrested Kong Meas, a banned CNRP member, after he posted on Facebook that the EU was planning to impose a tariff on Cambodian rice. On October 18, the Phnom Penh court convicted him of incitement to commit a felony and sentenced him to 18 months in prison.

On April 18, 2019, Tith Rorn, a CNRP activist and the son of a former CNRP commune council member in Kampong Cham province, died in police custody. His body had visible bruises, suggesting he was beaten. Police had arrested him on April 15 in connection with a 13-year-old assault charge, even though the statute of limitations for the offense had expired. Cambodian authorities claim Tith Rorn fell in the bathroom of his jail cell, but failed to seriously investigate.

The Cambodian government continued in 2019 to significantly curtail media freedom. While Voice of Democracy and Voice of America have conducted independent English and Khmer online reporting in 2019, previously existing local independent newspapers and radio outlets remained shut or sold to owners with ties to the government. Social media networks also continued to face surveillance and intervention by the government, reinforced by the adoption of a decree titled “Publication Controls of Website and Social Media Processing via Internet” in 2018, which allows for interference with online media and government censorship.

Cambodian authorities proceeded in 2019 with the politically motivated prosecution of two Radio Free Asia (RFA) journalists, Yeang Sothearin and Uon Chhin. The journalists were arrested on November 14, 2017, on fabricated espionage charges for reporting  for RFA after the government forcibly shuttered RFA’s Cambodia office. Upon determining that sufficient evidence was lacking for a conviction, the judge of the Phnom Penh court decided on October 3 to send the case back to the investigating judge for re-investigation.

On January 11, 2019, Hun Sen announced the resubmission to the National Assembly of a cybersecurity bill and a “fake news” law, raising concerns about additional restrictions on free expression and expanded surveillance against civil society groups, the political opposition, and independent media. While such laws have not been adopted yet, intimidating threats by the Cambodian authorities of all communication being surveilled has left Cambodians fearful and cautious.

China is Cambodia’s largest foreign investor and has close political and security cooperation with Phnom Penh. In mid-2019, the US government claimed to have documents showing Hun Sen agreed to give China access to Ream naval base on the Gulf of Thailand, which Cambodia and China deny.

Japan remained silent on Cambodia’s deteriorating human rights situation, as it competed with China for influence in Cambodia with large amounts of development aid and investment. In September, Japan helped shepherd a UN Human Rights Council resolution on Cambodia that was just as weak as its 2017 predecessor, failing to put meaningful pressure on Cambodia to improve its human rights record.

In 2019, the United States upheld a suspension on aid to Cambodia government agencies. In July 2019, the US House of Representatives passed the “Cambodia Democracy Act of 2019,” which seeks to sanction Cambodia’s top officials implicated in abuses. At time of writing, the Office of the US Trade Representative was also considering stripping Cambodia of trade privileges under the Generalized System of Preferences (GSP) because of labor rights violations.

At its Universal Periodic Review (UPR) at the UN Human Rights Council in 2019, Cambodia accepted 173 UPR recommendations, but rejected key recommendations on civil and political rights.