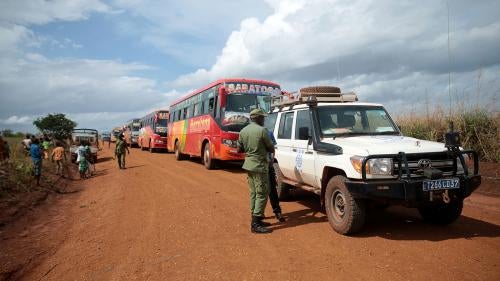 The humanitarian situation remained dire and by November, over 2,800 of the 7 million people who had contracted malaria died from the disease. Over 1.7 million people were food insecure, in part due to high population density and the influx of returning and new refugees.

The country’s once vibrant civil society and media bore the brunt of the government’s ire. In June, the government suspended one of the last remaining rights organizations, PARCEM. In October, four Iwacu journalists and their driver were arrested while travelling to Bubanza province to report on an outbreak of fighting between rebels and security forces. They were later charged with complicity in “threatening the security of the state.”

A United Nations Human Rights Council-mandated Commission of Inquiry (COI) reported in September that serious violations, including crimes against humanity, continued in 2018 and 2019, mainly perpetrated by state agents and the Imbonerakure and affecting mostly rural dwellers.

Although President Pierre Nkurunziza said he would not contest the presidential election in 2020, tensions continued to rise. Authorities lifted the suspension of some opposition parties and registered new parties, but many Burundians suspected of being political opposition supporters were killed, disappeared, arbitrarily arrested, and beaten. People who refused to join the ruling National Council for the Defense of Democracy-Forces for the Defense of Democracy (Conseil national pour la défense de la démocratie-Forces pour la défense de la démocratie, CNDD-FDD) and its youth league, donate money to it, participate in the construction of its offices, or attend its rallies also reported facing beatings, fines, and arrest.

Authorities have particularly targeted members of the opposition National Congress for Freedom (Congrès national pour la liberté, CNL) party. In 2019, members of the Imbonerakure and local authorities killed, disappeared, arbitrarily arrested, and beat dozens of CNL supporters across the country. According to local media reports, several local CNDD-FDD and CNL party offices were attacked or destroyed across the country.

People were forced to contribute money to the elections scheduled for May 2020 and to the ruling party. Imbonerakure members and local authorities mainly responsible for collecting the contributions largely did so by using force and threats, often at informal roadblocks set up to verify proof of payment. Those who could not provide receipts or refused to contribute faced violent retribution and intimidation. In some cases, people reported being denied access to public services if they were unable to prove they had contributed. In some provinces, CNDD-FDD and Imbonerakure members forced people to join the construction of local CNDD-FDD offices, and threatened, beat, or detained those who refused to comply, which constitutes forced labor.

The humanitarian situation in Burundi, one of the world’s poorest countries, was dire, with around 1.7 million people facing food insecurity, according to the UN Office for the Coordination of Humanitarian Affairs (OCHA).

Despite this, there were reports that the Imbonerakure were asking Burundians to “donate” food to them and were preventing people from accessing humanitarian food distributions. The COI report documented violations of the rights to food, health, and work.

In November, there were approximately 326,000 Burundian refugees in Tanzania, Rwanda, Uganda, and the Democratic Republic of Congo. Between September 2017 and October 31, 2019, around 80,000 refugees returned to Burundi under the United Nations refugee agency-backed assisted voluntary repatriation program, including 78,380 who returned from Tanzania. The agency said 8,293 Burundians arrived in Tanzania between January 1 and October 31, 2019.

Tanzania and Burundi signed an August 24 agreement that said about 180,000 Burundian refugees in Tanzania were “to return to their country of origin whether voluntarily or not” by December 31. An October agreement between the Burundian and Tanzanian police to allow cross-border operations by both police forces heightened fears of arrest among refugees, local media reported.

In August, UNHCR said that conditions in Burundi were “not conducive to promote returns.” In its latest report, the UN COI said that Burundians who had returned from abroad were among the main targets of human rights abuses.

Civil Society and Freedom of Media

On June 17, a government order was published suspending PARCEM, accusing the organization of tarnishing the image of the country and its leaders. Three PARCEM members sentenced in March 2018 to 10 years in prison for threatening the security of the state were acquitted upon appeal in December 2018 and released on March 21, 2019.

The 32-year sentence of human rights activist Germain Rukuki, a member of Action by Christians for the Abolition of Torture (ACAT), was confirmed on appeal in July. He was convicted of charges related to state security in April 2018. Judicial authorities told the media they had lost his file, which led to significant delays in the case. Nestor Nibitanga, an observer for the Association for the Protection of Human Rights and Detained Persons (APRODH), who was sentenced to five years for “threatening state security” in August 2018, remained in detention.

On October 1, 2018, authorities suspended the activities of foreign nongovernmental organizations (NGOs) for three months to force them to re-register, including by submitting new documentation stating the ethnicity of their Burundian employees. By March, at least 93 foreign NGOs were registered following a three-month suspension. It is not clear if the other organizations were denied registration for refusing or failing to declare the ethnicity of local staff. In May, the Supreme Court president ordered that the property of several high profile exiled Burundian human rights defenders and journalists be seized.

On March 29, the National Communication Council (CNC) announced it would extend the suspension order on the Voice of America’s (VOA) and withdraw the British Broadcasting Corporation’s (BBC) operating license. The CNC also forbade any journalist in Burundi from “providing information directly or indirectly that could be broadcast” by either the BBC or VOA.

Burundian authorities increasingly sought to control churches in the country, warning religious leaders against making critical or “political” statements. On May 21, the Seventh Day Adventist Church leader, Pastor Lamec Barishinga, and his deputy were arrested and accused of “rebellion.”

Burundi punishes consensual same-sex sexual relations between adults with up to two years in prison under Article 567 of the penal code. Article 29 of the Constitution of Burundi explicitly bans same-sex marriage.

In March, some of the seven schoolchildren arrested in Kirundo province were charged with “insulting the head of state” for allegedly scribbling on the president’s photo in their schoolbooks. The incident triggered a global social media campaign that eventually led to their release, although five of the seven were expelled indefinitely.

Several students reported being prevented from attending school for failing to make a contribution toward the 2020 elections. According to the COI report, some students affiliated with the opposition were harassed and threatened by students and teachers who are members of the ruling party.

In February, the facilitator of the Inter-Burundi dialogue, Benjamin Mkapa, presented his final report to the Summit of Heads of State of the East African Community. At a June UN Security Council Meeting, Smaïl Chergui, African Union commissioner for peace and security said “there is no alternative to intra-Burundi dialogue.”

Burundi refused to cooperate with any international and regional human rights mechanism. In February, the Office of the United Nations High Commissioner in Burundi was forced to close down at the insistence of the government. The COI on Burundi was not given access to the country, despite repeated requests. In September, the Human Rights Council renewed the COI’s mandate for another year.

According to UN diplomats, the government threatened to cut ties with UN special envoy Michel Kafando in May, forcing the UN Security Council to postpone a scheduled meeting on Burundi. In October, Special Envoy Kafando resigned after two-and-a-half years into the role. Russia, China and Equatorial Guinea publicly called for Burundi to be removed from the council’s agenda.

The International Criminal Court (ICC) continued investigations into crimes committed in Burundi since 2015. The European Union’s 2016 suspension of direct budgetary support to the government under article 96 of the Cotonou Agreement remained in place.