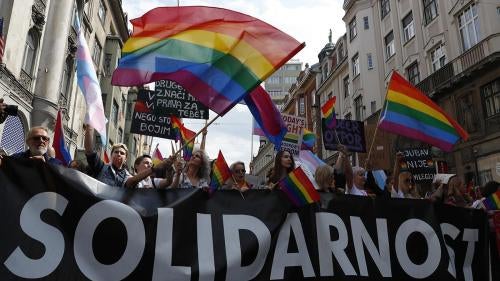 In 2019, Bosnia and Herzegovina (BiH) saw little improvement in protecting people’s rights. The holding of its first LGBT Pride was a welcome development, even though lesbian, gay, bisexual, and transgender people continue to face discrimination and violence. The state fails in practice to protect women from gender-based violence or hold most of those responsible for it to account. A decade after provisions in the constitution were ruled discriminatory by a human rights court, they have yet to be changed. Media freedom remains compromised and the pace of war crimes prosecutions slow.

December 2019 marked 10 years since the Sejdić-Finci ruling by the European Court of Human Rights (ECtHR), which found that the Bosnian constitution discriminates against ethnic and religious minorities by not allowing them to run for the presidency. In the decade that followed, the ECtHR has found similar constitutional violations in three further cases, but the constitution still has not been amended.

In October, the ECtHR ruled that Bosnian authorities had discriminated against a resident of the city of Mostar on the grounds of her place of residence, by failing to hold municipal elections for 11 years because of a disagreement among its main parties about the voting system. The court ordered Bosnia to hold elections in Mostar within six months.

The 2019 World Bank study examining Roma inclusion in the Western Balkans between 2011 and 2017 found only limited progress in improving access to education, employment, health, housing, and documentation for Roma in the country. In July 2019, Bosnia joined other governments in adopting a Declaration on Roma Integration within the EU Enlargement Process, committing to improve access to services for Roma and involve them in policy formation.

The Organization for Security and Co-operation in Europe (OSCE) between January and September 2019 registered 109 incidents of hate crimes—66.67 percent involving religion or ethnicity. The failure of Bosnian authorities to record statistics on types of hate crime impede comprehensive assessment of the problem and effective response to it.

In March 2019, a Bosniak post-war returnee from Prijedor was physically and verbally attacked by someone who identified themselves as a Bosnian Serb and posted a video of the incident on social media. At time of writing, a criminal investigation was ongoing.

The numbers of asylum seekers and migrants coming to Bosnia increased. Between January and August 2019, the state Service for Foreigners' Affairs registered 18,071 new asylum seekers, 5,000 more than the same period last year. The most common country of origin was Pakistan, followed by Afghanistan, Bangladesh, Iraq and Syria.

In the first of half of 2019, 17,165 people indicated an intention to seek asylum. Only 426 people actually applied during the same period. According to the UN Refugee Agency, UNHCR, short application deadlines and limited state capacity to process claims hinder access to asylum procedures.

At time of writing, there was one state-managed asylum center and six temporary accommodation centers with total capacity of around 4,000 people, an improvement on 2018, but still leaving thousands unable to access shelter and basic services.

At time of writing, a program aimed at building houses for 96,421 Bosnians who remain displaced by the  war in the 1990s had built 1,000 homes. Authorities said this should allow residents to relocate from 8 out of the 121 collective centers for the internally displaced that are still open. Fifty-eight percent of refugees who fled the Bosnia war in the 1990s have not returned to the country.

A revised National War Crimes Processing Strategy to improve the process of allocating cases across courts has awaited approval by the Council of Ministers since February 2018, made no progress in 2019, slowing down the rate at which war crimes cases are prosecuted.

According to information provided by the OSCE, in August 2019 there were 250 war crimes cases against 512 defendants in the post-indictment phase pending before all courts in BiH.

In March 2019, the United Nations Mechanism for International Criminal Tribunal (MICT) ruled against the appeal of Radovan Karadzic, former Bosnian Serb wartime president, confirming his 2016 conviction for genocide and other crimes and extending his initial 40-year sentence to life in prison.

In a positive move, in July 2019 BiH signed agreements with Serbia and Croatia to facilitate better cooperation in the search for missing persons from the 1990s wars.

There was less progress in coming to terms with the past. In April, the Serb member of the Bosnian Presidency Milorad Dodik called the Srebrenica genocide a myth.

BiH has an established legislative framework for tackling gender-based violence and human trafficking and institutional gender equality mechanisms, including in politics.  Implementation remained patchy or non-existent in 2019, according to women’s rights organization Kvinna Till Kvinna, leaving women vulnerable to domestic violence and employment discrimination, and underrepresented in political life.

The state response to gender-based violence remained inadequate, despite the ratification of the Istanbul Convention on violence against women. According to Kvinna Till Kvinna, police officers do not always inform women of their rights and available support, and perpetrators are just given a warning.

A September study from the United Nations Development Program’s found that women’s representation in Bosnian political institutions is only half of the 40 percent legally mandated proportion.

There is currently no systematic data collection on gender-based violence across the entities. In April 2019, the Council of Europe recommended Bosnia institutions increase the quality of such data. According to an OSCE regional survey in 2019, of 2,321 women interviewed in Bosnia, 42 percent do not know what to do if they experience violence, and 37 percent are not aware of any support organizations.

According to BiH Ombudsman Office, violence against women is still under-reported and some of the reasons are fear of the perpetrator, long court proceedings, low penalties for the perpetrator, distrust in the institutions, and social stigma.

Journalists continued to face interference with their work. As of August 2019, the BiH journalists’ association BH Novinari recorded 41 violations of journalists' rights, including three verbal threats, eight instances of political pressure, six physical assaults, and five death threats. Most of the cases were reported to police and at time of writing 15 were with the relevant prosecutor’s office. Although the number of solved cases has not significantly increased, BH Novinari reported police were more engaged and proactive with cases than in the past, and that other relevant state institutions communicated better regarding attacks on journalists.

In January, the owner of the portal Visoko.co.ba received threats after publishing articles about nepotism. Photojournalist Adi Kebo was attacked and his camera was damaged in March by a politician. At time of writing, both cases were with the relevant prosecutor’s office.

By August 2019, there were four court convictions for attacks on journalists, including a four-year sentence for Marko Čolić for the attempted murder of journalist Vladimir Kovačević in 2018.

According to Foundation CURE, a feminist activist organization, the first Pride Parade, held on September 8, was a success and an important victory for LGBT rights in Bosnia. The event was well secured by police and there were no registered incidents of violence.

In a December 2018 ruling concerning the violent attack on Merlinka queer festival five years ago, the Constitutional Court of BiH found Sarajevo Canton and the Federation of Bosnia and Herzegovina guilty for failing to secure the event and properly investigate the attack.

Civil society groups identified the most pressing issues as the lack of legal family rights of same-sex couples, lack of available medical procedures for gender reassignment, and the inability to freely express their sexual orientation and gender identity without fear of violence.

In February, the European Parliament adopted a resolution calling on BiH to address a number of human rights concerns, including introducing a property restitution law and compensating for historically-seized property.

In a May progress report, the European Union Commission urged Bosnia to improve its legal framework to allow holding municipal elections in Mostar and to implement Sejdić Finci ruling.

In  June report, the OSCE expressed concern over a sharp decline in the number of first-instance convictions for war crimes by Bosnian State Court since 2016, calling into question the quality of investigations and indictments of the Prosecutor’s Office.

In August, the UN Committee Against Torture (CAT) recommended the state to pay 15,000 euros in compensation to a woman raped in the war after the perpetrator, who was initially ordered by Bosnian court to pay the victim, did not have the funds, and to establish a state fund to compensate other victims of war. The CAT also rejected the government’s statute of limitations on prosecution of wartime sexual violence.