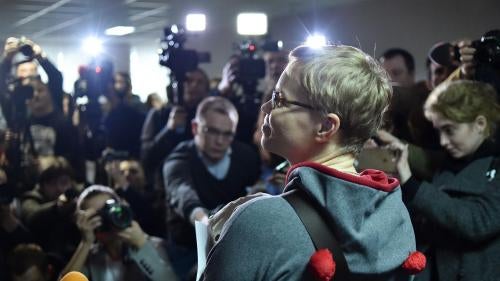 Belarus remains the only European country to use the death penalty. Those condemned to death are executed by a shot to the head. Authorities do not inform families of the execution date or the burial place.

In November 2018, authorities executed Ihar Hershankou and Siamion Berazhnou, sentenced on murder charges. In June, they executed Aliaksandr Zhylnikau. The fate of his codefendant on murder charges, Viacheslau Suharka, is unknown. According to Viasna, a leading local rights group, inmates sentenced on the same case are usually executed simultaneously.

In August, Belarusian authorities and the Council of Europe (CoE) announced plans to develop a roadmap to a moratorium on capital punishment.

In May, the Foreign Ministry refused accreditation to Viktar Parfionenka and Yauhen Skrabets of Poland-based Radio Racyja. The response to Skrabets indicated his accreditation was denied because Radio Racyja had published work by non-accredited journalists.

As of January, only five media websites have been granted official registration, according to the Belarusian Association of Journalists (BAJ). Unregistered websites cannot file requests for accreditation with government institutions.

Authorities routinely blocked media access to official events. In April, journalists from TUT.by, BelaPAN agency, newspaper Belarusy I Rynok, and European Radio of Belarus (ERB) were denied accreditation to cover President Aleksandr Lukashenko’s address to the National Assembly, despite both BelaPAN and ERB holding permanent accreditation to cover parliament. In May, authorities blocked journalists from attending a session in the Pershamaiki district administration on the redevelopment of a part of Minsk. In June, officials denied a Brestskaya Gazeta journalist entry to a court building due to “lack of accreditation.” Some independent media and bloggers were denied access to a news conference with the administration of the Brest battery factory project, and to a meeting between the head of Brest regional government Anatol Lis and environmental protesters.

According to the Belarussian Association of Journalists, in the first nine months of 2019, authorities brought 39 cases against 18 journalists for “illegal production and distribution of mass media products.” They were fined a total of approximately US$36,600.

In January, border guards at the Minsk airport denied entry to Olga Vallee, Fojo Media Institute program coordinator and a Swedish national, who traveled to Belarus at the invitation of BAJ.

BAJ reported that in mid-March 2019, police in Minsk detained two Russian journalists, Pavel Nikulin and Jan Potarsky, before their lecture at the Belarusian Press Club. Both were released three hours later without charge, but police seized their presentation materials.

In April, a court convicted an independent media editor of criminal negligence on allegations that some of her staff had been accessing the website of BelTA, the state news agency, without paying a subscription fee.

Also in April, authorities searched the offices of Belsat TV and seized computers and data storage devices following a libel complaint from a public official.

Siarhei Piatrukhin, a popular critical blogger, was repeatedly detained and fined throughout 2019 for coverage of protests against the battery plant construction near Brest. In April, he was convicted of criminal slander and libel for a series of videos he had uploaded to YouTube alleging police abuses.

In December 2018, amendments to the media law entered into effect requiring that all online media outlets keep records of and disclose to the authorities the names of people who submit comments. The amendments also provide for holding owners of registered online media criminally liable for any content on their website.

In May, President Lukashenko signed a decree blocking websites that called for “unauthorized protests” during the European Games, a large multi-sport event organized by the European Olympic Committees in Minsk in June.

In July, amendments to the criminal code articles on libel and defamation limited the definition of criminal slander and insult to speech uttered in a public space, such as in the media, a public speech, or on the internet.

In January, amendments to the law on mass events came into effect introducing a notification procedure for organizing public assemblies. However, in practice, sign-off is often denied, and organizers and participants are fined.

During Freedom Day on March 25, treated by many as an unofficial holiday and an alternative Belarus Independence Day, police detained 15 persons at an unauthorized opposition rally in Minsk. At least two were held in jail overnight.

Since 2018, of over 90 requests made to authorities to hold protests in Brest against the battery plant construction, only one was permitted. In April, police arrested 18 activists and fined three for their involvement in the peaceful protests. Also in April, police searched the car of activist Maisey Mazko, allegedly found cartridges and a briquette of an unknown substance, and opened a criminal case into alleged possession of ammunition. Another activist present during the search said the evidence was fabricated. Between May and August, authorities arrested and charged with administrative offenses at least 15 other activists involved in the peaceful protests in Brest.

In July, new legislation entered into force eliminating criminal liability for participation in the activities of unregistered organizations and replacing it with an administrative fine of up to 1,225 Belarusian rubles (US$600).

In May 2019, approximately 100 Roma in Mahilioŭ were detained for supposed disorderly conduct during the investigation of a policeman’s alleged murder. Viasna reported that the detentions were ethnicity-based and involved violence, threats, and intimidation. Police held over 50 men in custody for three days, allegedly humiliating and beating them. They released the men without charge, threatening them with re-arrest if they spoke to media.

Later, the investigation found that the policeman in question had committed suicide. The head of the president’s office apologized to the Roma community; however, the interior minister refused to apologize and dismissed allegations of xenophobia. In June, a working group convened by the prosecutor general to investigate reports of police brutality found “no illegal actions or abuse of power.”

In 2018, an interdepartmental working group drafted a law “On the rights of persons with disabilities and their social integration.” A vote in parliament was expected before the end of the year.

Belarus continued to refuse to cooperate with the United Nations special rapporteur on Belarus, Anaïs Marin, appointed in 2018. In her first report to the UN Human Rights Council (UNHRC) in May, Marin noted the “cyclical” and “systemic” nature of human rights violations. In July, UNHRC renewed her mandate for another year.

In February, the European Union prolonged its embargo on arms and on equipment that could be used for internal repression, as well as the asset freeze and travel ban against four people designated in connection with the unresolved disappearances of two opposition politicians, one businessman and one journalist in 1999 and in 2000. The EU and the CoE’s Committee of Ministers and Parliamentary Assembly issued statements condemning the death sentences of Asipovich and Paulau, and the execution of Zhylnikau, calling for a moratorium on executions as a step towards abolition.

The CoE also organized a round table on capital punishment in Belarus as part of the World Congress Against the Death Penalty in Brussels. The UN Human Rights Committee also condemned the execution of Zhylnikau and called for a moratorium on capital punishment. In June, the EU and Belarus held the sixth round of their bilateral Human Rights Dialogue, at which the EU called attention to the restrictions on freedom of assembly, the lack of anti-discrimination legislation, and the use of the death penalty.

In March, the Organization for Security and Co-operation in Europe (OSCE) representative on freedom of the media made an official visit to Minsk and called on the government to protect freedom of speech and de-monopolize state-owned media. In April, he denounced the search of the offices of Belsat.

In June, the German Bundestag Committee on Human Rights and Humanitarian Aid issued a statement on human rights and the death penalty in Belarus to coincide with the European Games in Minsk.