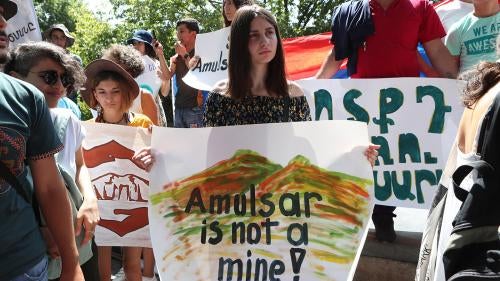 Armenia’s Prime Minister Nikol Pashinyan swept to office in 2018 after popular protests, further consolidated his power following the December 2018 snap parliamentary elections, which international observers found genuinely competitive and in line with international standards. Having secured a parliamentary majority, the government embarked on an ambitious reform agenda, including tackling corruption and reforming the economic and justice sectors. However, investigations into past violence and excessive use of force by law enforcement remained limited. Violence and discrimination based on sexual orientation and gender identity, discrimination against and segregation of people with disabilities, and domestic violence persisted.

Armenia’s police have a long record of impunity for using excessive force to break up largely peaceful protests. Authorities revived an investigation into the 2008 deadly clashes between protesters and security forces, and in June 2019, charged a high-ranking official with murdering a protester while security forces were breaking up a demonstration.

However, investigations into two episodes of excessive police force against largely peaceful demonstrators and journalists in 2016 and 2015 remained suspended. Authorities claimed they were unable to identify the alleged perpetrators.

In August, environmental protests against plans to restart construction on the Amulsar gold mine turned into confrontations between police and protesters after security officials barred them from demonstrating in a public park surrounding parliament. Police briefly detained six protesters on misdemeanor disobedience charges.

Related protests continued near the town of Jermuk, where local residents and environmental activists blocked the roads to the mine, opposing its construction on environmental and economic grounds.

Domestic violence persisted as a serious problem. According to official data, during the first half of 2019, authorities investigated 331 criminal domestic violence cases, including 176 that were newly initiated. They brought charges in 209 cases and sent 45 cases to courts.

But in most cases, authorities do not protect women and child survivors of domestic violence, jeopardizing their lives and well-being. The 2017 family violence law requires police to urgently intervene “when there is a reasonable assumption of an immediate threat of repetition or the continuation of violence” in the family. But in practice, law enforcement bodies lack awareness and training on protection mechanisms envisaged by the law, such as protection orders, and do not adequately use them. Armenia has only one shelter for domestic violence survivors, run by a nongovernmental organization (NGO). While there are plans to open another shelter, with an overall capacity of 10 to 13 people, Armenia falls far short of the Council of Europe recommendation of one shelter space per 10,000 people.

The Coalition to Stop Violence Against Women reported that 10 women had been killed by their intimate partners in the first half of 2019. One victim, Mariam Asatryan, 30, was beaten to death by her partner in May in Ararat province. Asatryan had sought the coalition’s assistance several times in 2017 and 2018, when she suffered serious injuries, including broken arms, as a result of domestic violence. According to the coalition, Asatryan had filed a complaint, but law enforcement failed to take adequate measures to protect her.

Domestic violence is neither a stand-alone felony nor an aggravating criminal circumstance in the criminal code. In October, authorities introduced amendments to domestic violence legislation, removing references to “restoring harmony in family” and reconciliation as the law’s principle concepts, widening its applicability to “former and current partners,” and including controlling behavior as a form of domestic violence. The amendments had not been adopted at time of writing. The Council of Europe Convention on Preventing and Combating Violence against Women and Domestic Violence (Istanbul Convention) had not been sent to parliament for ratification.

Armenia made progress in transforming some residential institutions for children into community centers and supporting family-based care. Authorities are committed to ending the institutionalization of children with disabilities and to ensuring adults in institutions can transition to live independently, with support as necessary. In April 2019, the government, in cooperation with a community group, committed to working with families to prevent placing children with disabilities in institutions. In June, authorities amended laws to facilitate foster care.

Armenia aims to have fully inclusive education by 2025, whereby children with and without disabilities study together in community schools. Despite progress, many children with disabilities remain segregated in separate special schools or classrooms, or isolated in home education. Children with disabilities in community schools do not always receive necessary support, called reasonable accommodations, for their education. Accommodations can include assistive devices like hearing aids, books in braille, audio, or other formats, or aides to assist students with behavior, self-care, or learning support.

Armenia’s legislation allows for adults with psychosocial or intellectual disabilities to be deprived of legal capacity, or the right to make decisions, and does not envisage any supported decision-making mechanisms. Authorities drafted a law on the rights of people with disabilities, but at time of writing, it has not yet been introduced in parliament.

Lesbian, gay, bisexual, and transgender (LGBT) people often face harassment, discrimination, and violence. The criminal code does not recognize homophobia and transphobia as aggravating criminal circumstances. Discussions around the ratification of the Istanbul Convention descended to hateful and derogatory speech by some public officials against LGBT people, suggesting that the convention has a hidden agenda of “LGBT propaganda” and legitimizing same-sex marriage.

Fear of discrimination and public disclosure of their sexual orientation prevent many LGBT people from reporting crimes. PINK Armenia, an LGBT rights group, documented at least 17 incidents of physical attacks based on sexual orientation or gender identity from January through August 2019.

In February, Max Varzhapetyan, 24, a gay activist, was assaulted and beaten on a Yerevan street. Three men chased him, shouting profanities and homophobic slurs. The men broke his tooth and injured his mouth and nose. Police launched an investigation but had pressed no charges at time of writing.

In April, during a parliamentary hearing on human rights, a transgender activist, Lilit Martirosyan, took the floor to highlight the discrimination and violence transgender people face. A backlash followed her address, including hate speech and death threats directed at Martirosyan. Law enforcement refused to launch an investigation, citing lack of criminal intent.

Openly gay men fear for their physical security in the military, and some seek exemption from obligatory military service. An exemption, however, requires a medical conclusion finding them “psychologically or mentally unfit” to serve. The process may be accompanied by derogatory treatment by officials. For example, in January, officers at a military draft board subjected Artak Arakelyan, a 19-year-old queer activist, to abuse and discrimination, using homophobic slurs to describe him, mocking him, and threatening to out him to his parent. Officials rejected Arakelyan’s request for an investigation.

The government-proposed bill on equality, intended as comprehensive anti-discrimination legislation, does not include sexual orientation and gender identity as grounds for protection from discrimination. In a September report, the Organization for Security and Co-operation recommended the government include sexual orientation and gender identity as additional protected categories. It also recommended that the government ensure that groups that have legitimate interests could bring cases on behalf of an alleged discrimination victim.

In May, the United Nations special rapporteur on the rights to freedom of peaceful assembly and of association published a report on his country visit, welcoming Armenia’s democratic transition and calling on the authorities to undertake profound reforms “to strengthen the judiciary, the independent investigative bodies and police.”

In May, the European Union published the EU-Armenia partnership implementation report, welcoming steps to implement economic, justice sector, and political reforms, but also acknowledging the early stage of the reform process. It also highlighted the need to address discrimination against LGBT people and people with disabilities.

In his July meeting with Pashinyan, European Union Council President Donald Tusk stressed the importance of rule of law and an independent judiciary.

In April, the EU delegation and member states’ embassies in Yerevan and the UN Armenia Office expressed concerns about the hate speech directed at the transgender activist, Lilit Martirosyan.

In June, the Council of Europe launched the Action Plan for Armenia 2019-2022 to support the government’s efforts to “reinforce human rights, ensure justice, combat threats to the rule of law, and promote democratic governance.”

In October, the Venice Commission, a Council of Europe advisory body, issued an expert opinion countering harmful myths about the Istanbul Convention, and concluding that Armenia’s ratification of the treaty would not contradict its constitution.