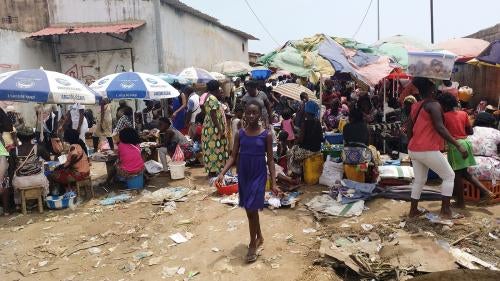 In 2019, Angola made some progress in respecting the rights to freedom of expression and peaceful assembly, allowing several protests and marches to take place across the country. But the crackdown on peaceful protesters and activists in the oil-rich enclave of Cabinda and the diamond-rich Lunda Norte continued. In January, parliament  approved a new law that limits the right to freedom of religion, leading to the closure of thousands of places of worship. Same-sex conduct was decriminalized in January, following the approval, by parliament, of the new penal code.

Crackdown on peaceful protesters and activists in the Cabinda enclave continued in 2019. Between January 28 and February 1, 2019, police arrested 63 Cabinda pro-independence activists ahead of an announced protest to celebrate the anniversary of the signing of the 1885 treaty that gave Cabinda the status of a protectorate of former colonial power Portugal. Many of the activists were members of the Movimento Independista de Cabinda (Independence Movement of Cabinda), a peaceful separatist group that wants independence or autonomy from Angola.

In March, police arrested 10 more activists who had gathered in a square in Cabinda city, to demand the release of fellow activists. Also in March, after visiting the province, members of the main opposition party, the National Union for the Total Independence of Angola (UNITA), accused Cabinda authorities of intimidating and repressing residents of the province.

Authorities violated the rights of residents and artisanal miners in Lunda Norte province. In April, police fired live bullets killing a boy and injuring three people, during a protest that took place after an artisanal miner was shot dead by an alleged private security agent in one of the diamond mines in Calonda. In March, Angola’s leading human rights group, Associacao Justica, Paz e Democracia (AJPD)  and community leaders accused authorities of arbitrarily limiting the movements of people in areas near the diamond fields, forcing local residents to abandon their farms for lack of access to their land. In some cases, according to community leaders, private security forces guarding the diamond mines beat and ill-treated residents who were caught trespassing in the diamond fields. In February, police killed a community leader, when a group of Capenda Camulenda residents were protesting against the concession of farming land to a diamond company.

Despite some progress in respecting the rights to freedom of expression and peaceful assembly, the Angolan police intimidated and arbitrarily arrested activists for planning protests.  In September, police arrested 23 people in Luena city during a  peaceful protest against the administration of the governor of the Moxico province, ahead of a visit of President Joao Lourenco.

In May,  police jailed activist Hitler “Samussuku” Tshikonde for 72 hours without charge or access to a lawyer. He was informed that that he was under investigation for allegedly “insulting the president” in a video that he had posted on social media.

In July, police detained seven people who were peacefully protesting  against lack of water supply in Benguela province.

In August, police used tear gas and dogs to disperse a group that had gathered without authorization in front of the Parliament building to demand that next year’s municipal elections take place in every Angolan city.

Hundreds of families who were forcibly evicted from their houses without the necessary procedural guarantees, or the provision of alternative housing or adequate compensation, continued to await resettlement. In August, some residents of an informal settlement of “Areia Branca” in Luanda, told Human Rights Watch that they were living in dangerous conditions and subject to infectious diseases after they were illegally evicted in 2013 by a company contracted by the office of Luanda’s governor to modernize the city. Over 400 families were set to be relocated to another neighborhood following the demolitions. Human Rights Watch confirmed that new houses were allocated to only 18 families, but without tittle deed or any other documents giving them ownership of the properties.

In January, Angola decriminalized same-sex conduct, after repealing the “vices against nature” provision in its law, widely interpreted to be a ban on homosexual conduct. The government also prohibited discrimination against people based on sexual orientation.  Anyone refusing to employ or provide services to individuals based on their sexual orientation may face up to two years’ imprisonment.

The changes came as Angola’s parliament adopted its first new penal code since gaining independence from Portugal in 1975.  While there have been no known prosecutions under the old penal code, such provisions curtail the rights and freedoms of lesbian, gay, bisexual, and transgender (LGBT) people, subjecting their intimate lives to unwarranted scrutiny.

Almost 17 years after the end of Angola’s civil war, landmines and other explosive remnants of war continued to kill and maim people, especially children. In June, five children were seriously injured by a landmine while  hunting near Balombo, Benguela province. A month earlier, nine children aged 3 to 11 were injured after they detonated a landmine as they lighted a fire to warm themselves in the compound of their home  in Cuito, Bie province.

In September, Britain’s Prince Harry visited the country as part of a tour of southern Africa. In Angola, hhe witnessed the work of the HALO Trust demining project in Huambo province, where his late mother Princess Diana was  photographed in 1997 walking into a minefield as part of her efforts to generate concern to clear landmines from Angola. According to the government, at least 1,220 areas of Angola are still contaminated by landmines, against 2,700 in 2007. The most affected provinces are Cuando Cubango, Moxico, Cuanza Sul and Bie.

A new law that limits the right to freedom of religion was approved by parliament in January. The Law on Freedom of Religion, Belief and Worship stipulates that religious groups must have at least 100,000 members to be officially recognized. In May, the government announced that as part of Rescue Operation, which aimed at restoring state authority by instituting order in worship, on the roads, and over illegal migrations, among others, over 2,000 churches and places of worship had been closed.

A Muslim community leader told media that 39 mosques have been closed in Lunda Norte, and more than 10,000 Muslims forced to cross the border to the Democratic Republic of Congo to hold Ramadan in May. Islam is not an authorized religion in Angola, and mosques are not allowed to operate in most parts of the country. In January, the minister of culture told parliament that the government was monitoring Islam linked groups in the country and would soon make an official decision about the religious group.

In 2009, Angola took over the leadership of two important defense roles in regional bodies, the Southern African Development Community (SADC) Defense Inspection and the African Union Peace and Security Council. Both bodies are tasked with promoting security, peace and stability. Their mandate also includes conflict prevention and undertaking peace-building missions in member states.

In August 2019, Angola mediated a summit that culminated  with the leaders of Uganda and Rwanda agreeing to reopen the border between the two countries, ending months of tensions that raised fears of armed hostilities.

Also in August, United States Secretary of State Michael Pompeo welcomed the reforms  President João Lourenço has implemented since taking office in 2017. In March, the US deputy assistant secretary in the Bureau of Democracy, Human Rights and Labor, Scott Busby, pledged to support the government to enhance mechanisms of accountability for human rights abuses.

In October, the European Union welcomed Angola’s ratification of three international human rights treaties:  the Second Optional Protocol to the International Covenant on Civil and Political Rights, aiming at the abolition of the death penalty, the Convention against Torture and Other Cruel Inhuman or Degrading Treatment or Punishment, and the Convention on the Elimination of All Forms of Racial Discrimination.