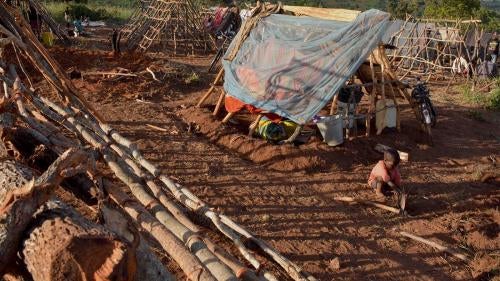 Human rights violations in Mozambique increased in 2016 due to rising tension and armed clashes between the government and the former rebel group, now political party, Resistência Nacional Moçambicana (Mozambican National Resistance or RENAMO).

Security forces were credibly implicated in abuses in operations against RENAMO, including summary executions and sexual violence that forced tens of thousands of people to flee the country. RENAMO also committed abuses in 2016, including raids on health clinics. At least 10 high-profile figures were attacked or killed in apparently politically motivated attacks, with incomplete investigations by authorities.

The country also suffered an economic crisis due to the fall in commodity prices and disclosure of the government’s enormous debt to state-owned companies. The economic crisis had a significant impact on the country’s finances, making it harder for people to enjoy basic economic and social rights.

Government security forces at times apparently conducted summary executions of people they believed to be linked to RENAMO. In April, the Office of the United Nations High Commissioner for Human Rights said it received reports of at least 14 RENAMO officials who had been killed or abducted around the country by unidentified individuals or groups since the beginning of the year.

Mozambican refugees in Malawi said that soldiers in uniform, some driving army vehicles, had summarily executed male villagers in Tete province in February 2016, or tied and taken them to undisclosed locations. Refugees also reported soldiers torching homes, granaries, and cornfields of local residents whom the soldiers believed were feeding or otherwise supporting RENAMO fighters.

At least 10 high-profile figures, including senior opposition members, state prosecutors and investigators, and prominent academics, were either killed or injured in apparently politically motivated attacks.

Among those targeted were constitutional lawyer Gilles Cistac, who was shot dead outside a Maputo café after receiving threats for publicly defending the disputed constitutionality of RENAMO’s petition to create autonomous provincial authorities; Manuel Bissopo, secretary general of RENAMO, who was shot and severely wounded in Beira city center, Sofala province; José Manuel, a RENAMO member of the National Council for Defence and Security, who was shot dead outside Beira international airport; Jeremias Pondeca, a former member of parliament from RENAMO and a member of the peace talks team, who was shot dead on a Maputo beach; and Jaime Macuane, a political commentator and academic, who was shot multiple times in the legs by men who told him they had been ordered “to teach him a lesson.”

In May, local residents discovered at least 15 unidentified bodies under a bridge in a remote area between the central provinces of Manica and Sofala. Local authorities at first ignored calls for a prompt and thorough investigation. They then announced that decomposition had made it impossible to conduct autopsies, and that the bodies had since been buried. Facing pressure from human rights groups and media, the government announced it would exhume the bodies and investigate. At time of writing, no findings had been announced and a parliamentary commission that established its own investigation team had not published a detailed account of its findings.

Since October 2015, at least 10,000 people have fled to neighboring Malawi and Zimbabwe because of abuses committed by the army and RENAMO fighters. The United Nations High Commissioner for Refugees said that most of those who fled had returned home by late 2016, following assurances of safety by the Mozambican government. In 2016, the number of internally displaced people continued to grow, forcing the government to set up camps in Manica province, where authorities said over 1,000 families were living.

In the first half of 2016, armed men linked to RENAMO conducted raids on at least four hospitals and health clinics in Zambezia and Niassa provinces, looting medicine and supplies, and destroying medical equipment. The raids threatened access to health care for tens of thousands of people in remote areas. The authorities claimed that RENAMO gunmen carried out over a dozen attacks on health clinics since the beginning of the year in other places, including Sofala, Manica, and Tete provinces.

Attacks on People with Albinism

Killings, kidnappings, and physical attacks against persons with albinism continued to grow, despite government efforts to stop the violence. According to local civil society groups, over 100 people with albinism have disappeared since 2014, when the attacks were first reported.

Authorities say the attacks are fueled by the witchcraft-linked belief that potions made of body parts of persons with albinism can produce wealth and success. In August 2016, the UN Independent Expert on the enjoyment of human rights by persons with albinism, Ikponwosa Ero, visited Mozambique and praised the government’s efforts to stop attacks on persons with albinism. At the same time, Ero expressed concerns over the authorities’ inability to identify and arrest perpetrators of such crimes.

Mozambique continued to be among the countries with the highest rates of child marriage in the world. According to UNICEF, 48 percent of girls marry before they turn 18 and over 14 percent before they turn 15. In 2016, the government unveiled its national strategy to end child marriage by 2019, which includes improving girls' access to education, sexual and reproductive health services, and legal reforms.

Once one of the fastest growing economies in the world following the discovery of huge reserves of coal, oil, and gas, Mozambique continued to suffer from low commodity prices, drops in foreign investment, and a debt crisis. In May 2016, a group of 14 donor countries, including the United Kingdom and European Union, and multilateral institutions that included the International Monetary Fund and World Bank, suspended direct support to the state budget after revelations that the government has more than US$1 billion in undisclosed loans.

In June, the UK high commissioner in Maputo, Joanna Kuenssberg, expressed concerns over rising political violence in the country, and the threat it poses to freedom of expression and the press.

In July, the EU and other international groups agreed to mediate talks between the government and RENAMO. In September, Mozambican President Filipe Nyusi visited the United States and met Secretary of State John Kerry and National Security Advisor Susan Rice, with whom he discussed the country’s ongoing violence. It is unclear whether they discussed human rights concerns.

During the opening statement at the 33rd session of the UN Human Rights Council in September, UN High Commissioner for Human Rights Zeid Ra’ad al-Hussein warned that Mozambique was showing signs of sliding into violence. He urged the government to hold perpetrators to account and to address the corruption that deprives many people of their economic and social rights.