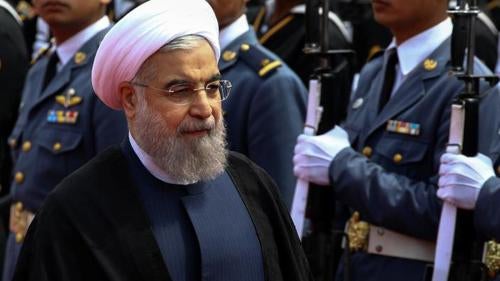 Despite three years in his office, President Hassan Rouhani has not delivered on his campaign promise of greater respect for civil and political rights. Executions, especially for drug-related offenses, continued at a high rate. As Rouhani faces elections for a second term in May 2017, the hardline factions that dominate the security apparatus and judiciary continued to crackdown on citizens for the legitimate exercise of their rights, in blatant disregard of international and domestic legal standards. Iranian dual nationals and citizens returning from abroad were at particular risk of arrest by intelligence authorities, accused of being “Western agents.”

Despite an initial slowdown in executions in the first months of 2016, authorities had executed at least 203 individuals by October 25. Human rights groups, however, report that the number might be as high as 437, with most executions taking place in the second half of the year. According to government authorities, individuals convicted of drug charges constitute the majority of those executed in the country.

Under Iranian law, many nonviolent crimes, such as “insulting the Prophet,” apostasy, same-sex relations, adultery, and drug-related offenses, are punishable by death. In December 2015, members of Parliament introduced a bill to eliminate the death penalty for drug offences that do not involve violence. However, the initiative, while welcomed by several authorities, has not moved forward.

On August 2, authorities announced that they had executed at least 20 alleged members of a group Iran considers a terrorist organization on charges of moharebeh, or “enmity against God.” Rights groups believe that these individuals were among a group of 33 Sunni Kurdish men arrested in 2009 and 2010, and sentenced to death in unfair trials after enduring abuses and torture in detention. In August, authorities in Khuzestan province executed three Arab citizens on alleged terrorism charges.

In March, the United Nations Children’s Rights Committee noted that flogging was still a lawful punishment for boys and girls convicted of certain crimes. The committee noted reports that lesbian, gay, bisexual, transgender, and intersex (LGBTI) children had been subjected to electric shocks to “cure” them.

On May 25, Iranian media reported that authorities had flogged 17 miners in Western Azarbaijan province after their employer sued them for protesting the firing of fellow workers.

Fair Trials and Treatment of Prisoners

Iranian courts, and particularly the revolutionary courts, regularly fell short of providing fair trials and allegedly used confessions obtained under torture as evidence in court. Iranian law restricts the right for a defendant to access a lawyer, particularly during the investigation period.

According to Iran’s criminal procedure code, individuals charged with national or international security crimes, political and media crimes, and those charged with crimes that incur capital punishment, life imprisonment, or retributive punishment (qisas), can be denied legal counsel under detention for up to a week. Moreover, they have to select their counsel from a pool of preapproved lawyers determined by the head of the judiciary.

Several political prisoners and individuals charged with national security crimes suffered from a lack of adequate access to medical care under detention. In April, Omid Kokabee, a young physicist who was sentenced to 10 years in prison in 2012, underwent surgery to remove his right kidney due to complications from cancer after authorities unduly delayed his access to appropriate medical treatment.

Space for free speech and dissent remained highly restricted, and authorities continued to arrest and charge journalists, bloggers, and online media activists for exercising their right to freedom of expression.

In April, a revolutionary court sentenced journalists Afarin Chitsaz, Ehsan Mazandarani, and Saman Safarzaei to terms of ten, seven, and five years, respectively, and Davoud Assadi, the brother of Houshang Assadi, a journalist who lives in France, to five years. Mazandarani’s and Chitsaz’s sentences were reduced to two and five years, respectively, by the appeals court. The intelligence branch of the Revolutionary Guards Corps (IRGC) arrested the four individuals, along with journalist Issa Saharkhiz, accusing them of being part of an “infiltration network” colluding with foreign media.

In June, the country began implementing a political crime law which, while a step forward in granting fair trials, could still limit free speech. According to the law, insulting or defaming public officials, when “committed to achieve reforms and not intended to target the system, are considered political crimes.” However, political prisoners have to be detained separately from ordinary criminals and have to be tried publicly in the presence of a jury unless doing so is deemed detrimental to family disputes, national security, or religious and ethnic sentiment.

Hundreds of websites, including social media platforms such as Facebook and Twitter, remained blocked in Iran. The intelligence apparatus heavily monitored citizens’ activities on social media. Hundreds of social media users, in particular on the Telegram messaging application and Instagram, have been summoned or arrested by the IRGC for commenting on controversial issues, including fashion.

In the past year, the police and judiciary prevented dozens of musical concerts, particularly those featuring female vocalists and musicians, in different provinces.

Freedoms of Association, Assembly, and Voting

In February, millions of Iranians participated in elections for Parliament and the Assembly of Experts. In the lead-up to these elections, the Guardian Council, the body in charge of vetting candidates, disqualified the majority of candidates associated with the reformist movement based on discriminatory and arbitrary criteria. After the election, in an unprecedented move, the council disqualified Minoo Khaleghi, who had been elected in the city of Isfahan, on allegations of shaking hands with a man.

Authorities continue to target independent unionists and restrict freedom of assembly and association.

On February 22, a revolutionary court sentenced Ismail Abdi, secretary general of the Teachers’ Association who has been detained since June 2015, to six years in prison, in part for organizing a teachers’ demonstration in front of the Parliament on May 15.

On July 27, 92 student organizations published a letter to President Rouhani criticizing the persistent “atmosphere of fear and intimidation” in Iran’s universities following the cancelation of student programs or the unlawful interference in the agendas of these programs by non-university authorities. While student and women’s rights activist Bahareh Hedayat was released from prison after six-and-a-half years in September, Zia Nabavi a prominent student activist, remained in prison. Both had been jailed since 2009 for their peaceful activism following the presidential election that year.

Scores of human rights defenders and political activists such as Abdolfattah Soltani remained in prison for their peaceful activities. In May, a revolutionary court sentenced prominent Iranian human rights activist Narges Mohammadi, who had been detained for a year, to a total of 16 years in prison for charges including “membership in the banned campaign Step by Step to Stop the Death Penalty.”

In 2010, a revolutionary court sentenced Mohammadi to six years in prison for her rights-related activities, but authorities released her due to a serious medical condition from which she still suffers.

In May, prominent Kurdish human rights defender Mohammad Sediq Kaboudvand, the former president of the Human Rights Organization of Kurdistan, embarked on a hunger strike in his ninth year of detention to protest new charges that were brought against him.

Iranian women face discrimination in personal status matters related to marriage, divorce, inheritance, and child custody. A woman needs her male guardian’s approval for marriage regardless of her age and cannot pass on her nationality to her foreign-born spouse or their children. Married women may not obtain a passport or travel outside the country without the written permission of their husbands.

The UN Children’s Rights Committee reported in March that the age of marriage for girls is 13, that sexual intercourse with girls as young as nine lunar years was not criminalized, and that judges had discretion to release some perpetrators of so-called honor killings without any punishment. Child marriage—though not the norm—continues, as the law allows girls to marry at 13 and boys at age 15, as well as at younger ages if authorized by a judge.

On July 31, 2016, President Rouhani suspended the hiring exam for public sector jobs to investigate apparent discrimination against women in the job market.

The government denies freedom of religion to Baha’is and discriminates against them. At least 85 Baha’is were held in Iran’s prisons as of October 2016. Security forces also continued to target Christian converts of Muslim heritage, as well as members of the “house church” movement who gather to worship in private homes.

In August, a number of Sunni figures in Kurdish areas were summoned and interrogated after they criticized the executions of at least 20 individuals on August 2.

The government restricted cultural as well as political activities among the country’s Azeri, Kurdish, Arab, and Baluch minorities. However, in August participants in the national entrance examinations for universities in Iran were allowed to choose Kurdish and Turkish languages as their majors at the bachelor level. Last year, the University of Kurdistan reportedly accepted 40 students to study the Kurdish language at the bachelor level.

On January 16, Iran and its international partners announced the “implementation day” of the nuclear agreement, known as the Joint Comprehensive Plan of Action, and the subsequent lifting of economic and financial sanctions related to Iran’s nuclear activities. Since the agreement, several trade delegations have shuttled between Iran and other countries, particularly in Europe.

The Iranian government continued to provide the Syrian government with military assistance in 2016. Human Rights Watch has documented a pattern of deliberate and indiscriminate attacks on civilians as well as torture by the Syrian government. On August 15, media reports claimed that Russia had used an Iranian military base in city of Hamedan for its airstrikes in Syria.

On April 16, European Union High Representative and Vice-President of the European Commission Federica Mogherini and Iranian Foreign Minister Mohammad Javad Zarif announced in a joint statement that the EU and Iran intend to cooperate on human rights, migration, and drugs.

On October 25, the EU Parliament adopted the report on EU strategy towards Iran after the nuclear agreement in which it expressed concerns about the alarming rate of executions in Iran and called for the release of all political prisoners.

In September, the United Nations Human Rights Council elected Asma Jahangir as the new special rapporteur on the situation of human rights in Iran. Iran did not allow Jahangir’s predecessor, Ahmed Shaheed, who was appointed in 2011, to visit the country.