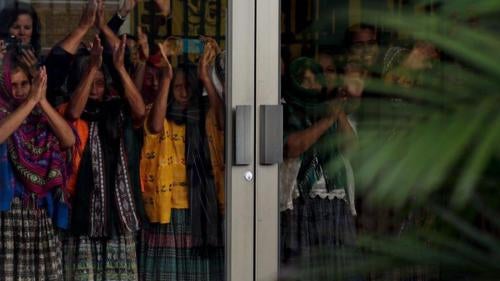 Guatemala continued to make progress in prosecuting human rights and corruption cases, due in significant part to the collaboration of the Attorney General’s Office with the United Nations-backed International Commission against Impunity in Guatemala (CICIG), which was established in 2007 to investigate organized crime and reinforce local efforts to strengthen the rule of law.

In September 2015, after being implicated by CICIG in a million-dollar tax-fraud scandal, Guatemalan President Otto Pérez Molina resigned and was arrested on charges of customs fraud, racketeering, and bribery.

President Jimmy Morales took office in January, and in April, asked the UN to extend CICIG’s mandate—which had been set to expire in 2017—until September 2019.

In February, a court convicted two former military officers on charges of crimes against humanity in the form of sexual violence and domestic and sexual slavery. It was the first time that a Guatemalan court had prosecuted a case of sexual violence related to the country’s 36-year internal armed conflict. The victims were 15 Maya Q’eqchi’ women.

In addition to the sexual violence convictions, the court found Lt. Col. Esteelmer Reyes Girón, former commander of Sepur Zarco military base, guilty in the homicides of three females, and Heriberto Valdez Asig, former military commissioner, guilty in the enforced disappearance of the husbands of seven of the female victims. They were sentenced to 120 years and 240 years in prison respectively.

Former Guatemalan head of state Efraín Ríos Montt was found guilty in May 2013 of genocide and crimes against humanity. He was sentenced to 80 years in prison, but several days later the Constitutional Court overturned the verdict on procedural grounds. The retired general had led a military government from 1982 to 1983, when the military carried out hundreds of massacres of unarmed civilians.

In August 2015, a trial court declared Ríos Montt mentally unfit for retrial, ruling instead that he should be represented by his lawyers in a special closed-door proceeding. In October 2015, an appellate court rejected a two-year-old petition by Ríos Montt’s attorneys to apply a 1986 amnesty decree that would put an end to his prosecution. The court ruled that the decree, applicable to “all political and related common crimes” committed between March 1982 and January 1986, does not apply to genocide and crimes against humanity. A retrial of Ríos Montt began in March 2016, behind closed doors.

In May, the First Court of Appeals issued a provisional ruling that the former dictator should be separated from his co-defendant, José Mauricio Rodríguez Sánchez, the former intelligence director. A new trial for each defendant had yet to be scheduled at time of writing.

In recent years, the Attorney General’s Office has obtained convictions in several other cases involving human rights crimes committed during the war. In 2011, four army Special Forces soldiers received lengthy sentences for their role in the 1982 Dos Erres massacre of more than 250 people. In 2013, former National Police Chief Héctor Bol de la Cruz received a 40-year sentence for ordering the disappearance of a student activist in 1984. In January 2015, former Police Chief Pedro Garcia Arredondo was sentenced to 90 years in prison for a raid on the Spanish embassy in 1980, in which 37 people burned to death.

In July 2014, Fermín Felipe Solano Barillas became the first ex-guerrilla to be convicted in connection with atrocities. Found guilty of ordering the massacre of 22 residents of the town of El Aguacate in 1988, he was sentenced to 90 years in prison.

Violence and extortion by powerful criminal organizations remain serious problems in Guatemala. Corruption within the justice system, combined with intimidation against judges and prosecutors, contributes to high levels of impunity. Gang-related violence is an important factor prompting people, including unaccompanied youth, to leave the country.

Despite these problems, prosecutors in recent years have made progress in cases of violent crime, as well as some cases of extrajudicial killings and corruption.

In April 2015, a CICIG investigation uncovered a US$130 million tax fraud scandal involving more than 50 high-ranking members of the government. This led to charges against then-President Otto Pérez Molina, Vice President Roxana Baldetti, and 35 others.

In April 2016, prosecutors brought additional charges against Pérez Molina in connection with a $30 million commission on a Spanish company’s contract to operate a new, Pacific-coast container terminal in Puerto Quetzal.

In June, the CICIG announced arrests in connection with a clandestine structure that operated behind the façade of the Partido Patriota (PP), ex-President Pérez Molina’s political party. The PP allegedly designed a financial scheme whose main objective was the illicit enrichment of its members through state contracts worth more than $35 million. At time of writing, more than 57 members of the Guatemalan business elite, from bankers to Congressmen, had been arrested.

The UN-backed CICIG, established in 2007, plays a key role in assisting Guatemala’s justice system in prosecuting violent crime. The CICIG works with the Attorney General’s Office, the police, and other government agencies to investigate, prosecute, and dismantle criminal organizations operating in the country. It is empowered to participate in criminal proceedings as a complementary prosecutor, to provide technical assistance, and to promote legislative reforms.

The US Congress approved $750 million in assistance for 2016 for the Plan of the Alliance for Prosperity in the Northern Triangle, a five-year initiative announced in 2014 that intends to reduce incentives to migrate from Guatemala, El Salvador, and Honduras. The Obama administration requested the same amount for the plan for 2017. At time of writing, Congress had not yet approved the final budget.

The aid aims to reduce violence, strengthen governance, and increase economic opportunity. Fifty percent of it is conditioned on the US Department of State annually certifying progress by the beneficiary countries in strengthening institutions, fighting corruption and impunity, and protecting human rights. In 2016, Guatemala received certification for continued full funding under the plan. The assistance for 2016 included $7 million for CICIG in Guatemala, and funding for similar commissions, if established, in El Salvador and Honduras. The US Department of State announced in June that, since 2008, the US had invested $36 million in the CICIG’s work.

The Guatemalan government is implementing a reparations plan, required for certification to receive US aid, to address human rights violations suffered by communities displaced by construction of the Chixoy Hydroelectric Dam in 1975. Distribution of $2.8 million in reparations started in March 2015. Reparations are expected to total $156 million by 2029, the dam’s planned completion.