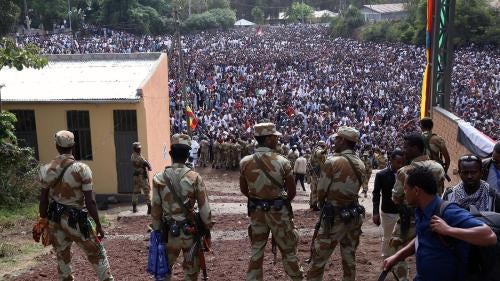 Large-scale and unprecedented protests swept through Ethiopia’s largest region of Oromia beginning in November 2015, and in the Amhara region from July 2016. Ethiopian security forces cracked-down on these largely peaceful demonstrations, killing more than 500 people.

Scores of people fleeing security force gunfire and teargas during the annual Irreecha festival died in a stampede on October 2 in Bishoftu, Oromia region. On October 9, following the destruction of some government buildings and private property by youths, the government announced a draconian and far-reaching six-month countrywide state of emergency, which prescribes sweeping and vaguely worded restrictions on a broad range of actions and undermines free expression, association, and peaceful assembly. The directive also effectively codified many of the security forces’ abusive tactics, such as arbitrary detention.

The protests occurred against a background of nearly non-existent political space: in parliament, the ruling coalition has 100 percent of seats, there are restrictions on civil society and independent media, and those who do not actively support the government often face harassment and arbitrary detention.

Ethiopia deploys troops inside Somalia as part of the African Union mission (AMISOM). In 2016, there were reports that abusive “Liyu police,” a paramilitary force, were also deployed alongside the Ethiopian Defense Forces in Somalia. In July, Ethiopian forces operating outside the AMISOM mandate indiscriminately killed 14 civilians during an operation against Al-Shabab in Somalia’s Bay region. (See Somalia chapter.)

Concerns about the government’s proposed expansion of the municipal boundary of the capital, Addis Ababa, triggered widespread protests across Oromia and a heavy-handed response by security forces in 2016. Protesters feared that the Addis Ababa Integrated Development Master Plan would displace Oromo farmers, as has increasingly occurred over the past decade. There were broad doubts about the sincerity of the government’s announced cancellation of the Master Plan in January 2016, due largely to past broken promises. Protesters expressed concerns over decades of historical grievances and the wrongful use of lethal force by the security forces. There were some reports of violence by protesters, but protests were largely peaceful. Similar protests and a resultant crack-down occurred in Oromia in April and May 2014.

During the protests, security forces arrested tens of thousands of students, teachers, opposition politicians, health workers, and those who sheltered or assisted fleeing protesters. While many detainees have been released, an unknown number remain in detention without charge or access to legal counsel or family. Most of the leadership of the legally registered opposition party, Oromo Federalist Congress, have been charged under the anti-terrorism law, including Deputy-Chairman Bekele Gerba, a staunch advocate of non-violence.

In July, protests spread to the Amhara region, triggered by the arrest of Welkait Identity Committee members, a group seeking to resolve long-standing concerns over administrative boundaries. Protesters in Amhara region are primarily concerned with the unequal distribution of power and economic benefits in favor of those aligned to the government. On August 6 and 7, security forces killed over 100 people in Amhara and Oromia, including over 30 people killed in Bahir Dar alone. The town witnessed one of the largest protests. There were reports of large-scale arrests throughout Amhara.

In September, dozens of ethnic Konso were killed by security forces in the Southern Nations, Nationalities, and Peoples’ Region (SNNPR) following protests over administrative boundaries in the Konso area.

The government has not shown a willingness to address the expressed grievances of the protesters in Amhara, Oromia, or Konso, blaming much of the unrest on lack of good governance and youth unemployment, exacerbated by “outside forces.”

The Ethiopian government failed to meaningfully investigate the killings of protesters in Oromia, Amhara, or Konso. In a report to parliament in June, the Ethiopia Human Rights Commission, a government body, concluded that the level of force used by security forces in Oromia was proportionate to the risk they faced from protesters, contrary to available evidence.

The October state of emergency directive banned all protests without government permission and permits arrest without court order in “a place assigned by the command post until the end of the state of emergency.”

The Liyu police, a Somali Regional State (SRS) paramilitary police force, continued to commit serious human rights abuses in their ongoing conflict with the Ogaden National Liberation Front (ONLF). There have been reports of extrajudicial killings, arbitrary detention, and violence against civilians accused of supporting or being sympathetic to the ONLF. Following a June 12 protest in Melbourne, Australia, against the visit of SRS President Abdi Iley, dozens of family members of protesters were arrested in Ethiopia.

Media continues to be under government stranglehold, exacerbated by the state of emergency at the end of 2016, with many journalists forced to choose between self-censorship, harassment and arrest, or exile. At least 75 journalists have fled into exile since 2010. In addition to threats against journalists, tactics used to restrict independent media include targeting publishers, printing presses, and distributors.

Scores of journalists—including Eskinder Nega and Woubshet Taye—protesters, and political opponents remain jailed under the anti- terrorism law. Journalist Getachew Shiferaw was convicted in November of criminal defamation and sentenced to one year in prison. On May 10, blogger Zelalem Workagegneu was sentenced to five years and two months under the anti-terrorism law after being detained for over 700 days. Journalist Yusuf Getachew, who was convicted in August 2015 also under the anti-terrorism law, was pardoned and released on September 10, after over four years in detention.

The government regularly restricts access to social media apps and some websites with content that challenges the government’s narrative on key issues. During particularly sensitive times, including after the Irreecha festival stampede, the government blocked access to the internet.

The government also jammed the signals of international radio stations like Deutsche Welle and Voice of America in August and September. Social media and diaspora television stations played key roles in the dissemination of information and mobilization during protests. Under the state of emergency, people are banned from watching diaspora television, sharing information on social media, and closing businesses as a gesture of protest, as well as curtailing opposition parties’ ability to communicate with media.

The 2009 Charities and Societies Proclamation (CSO law) continues to severely curtail the ability of independent nongovernmental organizations. The law bars work on human rights, governance, conflict resolution, and advocacy on the rights of women, children and people with disabilities if organizations receive more than 10 percent of their funds from foreign sources.

Questioning the government’s development policies is deemed particularly sensitive and activists face charges for doing so. For example, the trial of Pastor Omot Agwa, who had worked as the facilitator and interpreter for the World Bank’s Inspection Panel as it investigated abuses linked to a bank investment, continued in 2016. Two other individuals charged with Omot were acquitted in November. They were arrested in March 2015 at Addis Ababa airport on their way to a food security workshop in Nairobi, Kenya, and charged on September 7, 2015.

Ethiopian security personnel, including plainclothes security and intelligence officials, federal police, special police, and military, frequently tortured and otherwise ill-treated political detainees held in official and secret detention centers, to give confessions or provide information. Many of those arrested during recent protests said they were tortured in detention, including in military camps. Several women alleged that they were raped or sexually assaulted. There is little indication that security personnel are being investigated or punished for these abuses.

Allegations of forced displacement have arisen from commercial and industrial projects associated with Addis Ababa’s expansion and the continued development of state-owned sugar plantations in the Lower Omo Valley, home to about 200,000 indigenous people. Communities in Omo have seen grazing land cleared and access to the Omo River restricted. The reservoir behind the Omo River’s Gibe III dam began filling in January 2015, and there was no artificial flood in 2015 and a limited flood in 2016 contrary to government assurances. The flood is important in replenishing water levels in Kenya’s Lake Turkana and the agricultural lands along the banks of the Omo River.

Ethiopia continues to enjoy strong support from foreign donors and most of its regional neighbors, due to its role as host of the African Union (AU) and as a strategic regional player, contribution to UN peacekeeping, regional counterterrorism, aid, and migration partnerships with Western countries, and its stated progress on development indicators. Ethiopia is also a country of origin, transit, and host for large numbers of migrants and refugees.

The brutal crackdown against protesters and the state of emergency announcement resulted in stronger than usual public statements from many of Ethiopia’s traditional allies. The AU and the African Commission on Human and Peoples’ Rights both issued statements expressing concern, while the European parliament released a strong resolution, and resolutions were introduced in the US Senate and House of Representatives. The UN High Commissioner for Human Rights publicly stressed the need for an international investigation into the killings in July. Other donors, including the World Bank, have continued business as usual without publicly raising concerns.