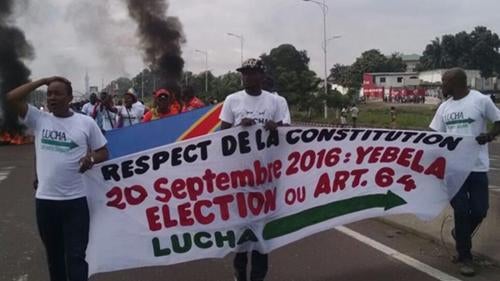 Political violence and government repression intensified in 2016 as President Joseph Kabila clung to power beyond his constitutionally mandated two-term limit, which ended on December 19, 2016, despite widespread opposition and international condemnation. As authorities deliberately stalled plans to organize elections, government officials and security forces systematically sought to silence, repress, and intimidate the growing coalition of voices calling for credible, timely elections.

After weeks of intense negotiations, participants at talks mediated by the Catholic Church concluded an agreement on New Year’s Eve. The deal, signed by representatives of Kabila’s ruling coalition, the political opposition, and civil society, includes a clear commitment that presidential elections will be held before the end of 2017, that Kabila will not seek a third term, and that there will be no referendum nor changes to the constitution. However, the signatories had not agreed on a detailed calendar or plan for implementing the deal, Kabila himself had not signed the agreement, and it was not clear whether measures would be taken to end the climate of repression.

More than 100 activists and opposition leaders or supporters were arbitrarily arrested between January and December 2016, and held for at least 48 hours. Some were held incommunicado for weeks or months and badly mistreated, while others were put on trial on trumped-up charges. At time of writing, at least 35 activists and political prisoners remained in detention.

Nine youth activists and at least 30 political opposition supporters were arrested in Kinshasa and Goma on or around February 16 in connection with a “ville morte,” or general strike, to protest delays in organizing presidential elections.

On May 4, Congo’s justice minister opened an investigation into one of the country’s leading opposition figures, Moïse Katumbi, for alleged recruitment of mercenaries. After police fired teargas and threw rocks at demonstrators who had gathered to support Katumbi when he was called in for questioning at the prosecutor’s office in the southeastern city of Lubumbashi, the national prosecutor authorized Katumbi to leave the country for health reasons.

In an unrelated case, he was later convicted in absentia for forgery regarding a real estate deal many years earlier and sentenced to three years in prison and fined US$1 million. One of the judges later described how she had been threatened by the director of the National Intelligence Agency (Agence Nationale de Renseignements, ANR), Kalev Mutondo, and forced to hand down the conviction—a blatant example of the agency’s interference in judicial independence.

On May 26, security forces fired teargas and live bullets as they sought to prevent demonstrations from going forward in Goma, killing at least one person and injuring at least 11 others, including four children. Opposition leaders had called for nationwide demonstrations to protest the Constitutional Court’s ruling that the president could remain in office “until the installation of the new elected president.”

The government also shut down media outlets close to the opposition, at least seven of which remained blocked at time of writing. In November, Communications Minister Lambert Mende issued a decree, making it increasingly difficult for foreign radio and TV stations to operate in Congo. The move came a week after authorities cut the signal of Radio France Internationale in Kinshasa altogether, and temporarily jammed the United Nations-supported Radio Okapi station.

In August 2016, the Congolese government blocked a Human Rights Watch senior researcher from continuing to work in Congo.

Congolese took to the streets again the week of September 19 to protest the electoral commission’s failure to announce presidential elections, three months before the end of Kabila’s term. Security forces responded with excessive force, killing at least 66 people and setting at least three opposition party headquarters on fire. Some protesters also turned violent, beating or burning to death several police officers. At least eight journalists were detained in an apparent attempt to block independent reporting of the situation.

As Kabila’s mandate came to an end, security forces deployed heavily throughout major cities on December 19 and 20 to try to prevent protests. At least 40 people were killed and hundreds more were arrested – many of whom had gone to the streets blowing whistles and banging on pots and pans to tell Kabila “his time was up.”

Opposition leader Franck Diongo was arrested on December 19, and convicted and sentenced to five years in prison on December 28, following a hasty trial that he attended in a wheelchair and on an intravenous drip from mistreatment he endured during arrest. The provincial parliament of Haut-Katanga voted on December 27 to lift the parliamentary immunity for opposition leader Gabriel Kyungu, accused of insulting Kabila.

Dozens of armed groups remained active in eastern Congo. Many of their commanders have been implicated in war crimes, including ethnic massacres, killing of civilians, rape, forced recruitment of children, and pillage.

In Beni territory, North Kivu, unidentified fighters continued to commit large-scale attacks on civilians, killing more than 150 people in 2016 according to Human Rights Watch research and credible reports from Congolese activists and the UN. At least 680 people have been killed since the beginning of the series of massacres in October 2014. There are credible reports that elements of the Congolese army were involved in the planning and execution of some of these killings.

Intercommunal violence increased as fighters from the armed groups Nduma Defense of Congo- Renové (NDC-R), the Union of Patriots for the Defense of the Innocent (UPDI), and the Democratic Forces for the Liberation of Rwanda (FDLR) carried out ethnically based attacks on civilians, killing at least 170 people and burning at least 2,200 homes.

Kidnappings of Congolese civilians and humanitarian aid workers continued to affect parts of Rutshuru, Lubero, and Masisi territories in eastern Congo. At least 175 people were kidnapped for ransom during 2015. In 2016, kidnappings continued, with more than 20 aid workers among the victims, further shrinking humanitarian space.

In 2015, the Congolese army unlawfully detained at least 29 children in dire conditions in the Angenga military prison in northwestern Congo. The authorities alleged that the boys were members of a rebel armed group. Most of them were released in April following pressure from Human Rights Watch and the UN. The others remain detained in Angenga.

During the week of December 19, heavy fighting broke out in various parts of the country, including in Lisala, Kananga, and Manono, in which scores of people were wounded and killed. It is unclear whether these clashes were related to the broader political crisis.

On December 19, 2015, two Congolese rebel leaders convicted by the International Criminal Court (ICC), Germain Katanga and Thomas Lubanga, returned to Congo to serve the remainder of their sentences in Kinshasa. While Katanga finished his sentence from the ICC ruling in January, he remains in detention and faces national war crimes charges in Congo that were filed against him before he was transferred to the ICC.

On March 21, the ICC found the Congolese politician and former rebel leader Jean-Pierre Bemba guilty of rape, murder, and pillage in neighboring Central African Republic. On October 19, the ICC found Bemba and his defense team guilty of bribing witnesses to lie in his favor at his trial.

On March 23, the ICC confirmed 70 charges of war crimes and crimes against humanity for Lord’s Resistance Army (LRA) leader Dominic Ongwen, a former child soldier who became a senior LRA commander. The trial began in December 2016.

In October, warlord Gédéon Kyungu Mutanga surrendered. Instead of arresting him, local officials in Lubumbashi gave Gédéon, as he is commonly known, a celebratory welcome. At time of writing it remained unclear whether he would serve the remainder of his 2009 sentence.

In response to the increased political repression, the United States imposed targeted sanctions against Kinshasa’s police commissioner, Gen. Célestin Kanyama, in June, and later against Gen. Gabriel Amisi Kumba and former police inspector John Numbi in September. In December, the US sanctioned then-Interior Minister Evariste Boshab and intelligence chief Kalev Mutondo. That month, the European Union sanctioned seven senior security officials who had played a role in the repression in 2015 and 2016.

In late September, following government repression of the protests in Kinshasa, the ICC prosecutor issued a strong warning that the court was closely monitoring the escalating situation.

In early November, a team of UN human rights experts called on authorities to lift a ban on public political meetings in several cities in Congo.

The online version of the World Report’s Democratic Republic of Congo chapter is an update of the printed edition.