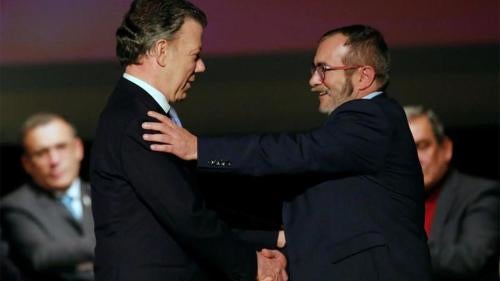 The government and the country’s largest guerilla group, the Revolutionary Armed Forces of Colombia (FARC), reached an agreement in 2016 to end their 52-year armed conflict. The agreement provides a historic opportunity to curb human rights abuses. Much will depend on how its justice provisions are passed into legislation, reviewed by the Constitutional Court, and then interpreted by a new “Special Jurisdiction for Peace.” On October 2, an initial version of the peace deal with flawed justice provisions was rejected by a slim margin in a national plebiscite, but the parties reached a new agreement on November 12.
Violence associated with the conflict has forcibly displaced more than 6.8 million Colombians, generating the world’s second largest population of internally displaced persons (IDPs), after Syria. Civilians continue to suffer serious abuses by the country’s second largest guerilla group, the National Liberation Army (ELN), and by paramilitary successor groups that emerged after a demobilization process a decade ago. Human rights defenders, trade unionists, journalists, indigenous and Afro-Colombian leaders, and other community activists face death threats and violence, including from guerrillas and successor groups. Perpetrators of violence against civilians are rarely held accountable.
Since the FARC announced a unilateral ceasefire in July 2015, abuses attributed to them have declined steeply. The Colombian government and the ELN announced in March 2016 that, after almost two years of exploratory negotiations, they would start formal peace talks. These had not started at time of writing, largely owing to the ELN’s unwillingness to free captives and end kidnappings.
In September, the Council of the State—one of Colombia’s high courts—annulled the 2012 re-election of Alejandro Ordoñez as the country’s inspector general and dismissed him from office. Under Colombian law, the inspector general is charged with protecting human rights, but during his seven years in office, Ordoñez repeatedly sought to undermine the rights of women and lesbian, gay, bisexual, and transgender (LGBT) people.

Since its formation in the mid-1960s, the FARC has committed systematic atrocities against civilians, including child recruitment, abductions, and widespread crimes of sexual violence.In August, President Juan Manuel Santos and the FARC leadership declared a “definitive ceasefire” which was followed by the peace agreement approved later in the year.
The ELN continues to commit serious abuses against civilians. In the province of Chocó, for example, it has been responsible for kidnappings, killings, forced displacement, and child recruitment. In May 2016, ELN guerillas kidnapped three journalists in the northeastern province of Norte de Santander.
The ELN continued in 2016 to use antipersonnel landmines. The government reported that landmines and unexploded ordnances killed 3 civilians and injured 19 between January and October 2016.

Paramilitaries and their Successors

Between 2003 and 2006, right-wing paramilitary organizations with close ties to security forces and politicians underwent a deeply flawed government demobilization process in which many members remained active and reorganized into new groups. These successor groups continue to commit such widespread abuses as killings, disappearances, and sexual violence. They have at times benefited from the tolerance and even collusion of state agents.
Buenaventura, a largely Afro-Colombian port on the Pacific coast where successor groups continue to commit such abuses, has one of the highest rate of forced displacement in Colombia, with 12,956 residents fleeing their homes in 2015, and 1,955 fleeing from January through October 2016.
The conflict between the AGC and the ELN in the province of Chocó has severely limited the ability of many indigenous and Afro-Colombian people to leave their towns.
Implementation of the Justice and Peace Law of 2005, which offers dramatically reduced sentences to demobilized paramilitary members who confess their crimes, has been slow, despite significant progress since 2014. As of July 2016, 182 of the more than 30,000 paramilitary troops who officially demobilized had been sentenced under the law. The convictions cover a small portion of the more than 4,000 defendants seeking the law’s benefits.
In October, the Attorney General’s Office indicted Santiago Uribe, the brother of former President Alvaro Uribe, on charges of murder and association to commit crimes for his alleged role in the paramilitary group “The 12 Apostols” in the 1990s.
“Parapolitics” investigations of current and former members of Congress accused of conspiring with paramilitaries continued in 2016. From 2006 through August 2015, 63 legislators were convicted of crimes related to “parapolitics.”

From 2002 through 2008, army brigades across Colombia routinely executed civilians. Under pressure from superiors to show “positive” results and boost body counts in their war against guerrillas, soldiers and officers abducted victims or lured them to remote locations under false pretenses—such as promises of work—and killed them, placed weapons on their bodies, and reported them as enemy combatants killed in action. There has been a dramatic reduction in cases of alleged unlawful killings attributed to security forces since 2009, though credible reports of some new cases continue to emerge.
As of June 2016, the Attorney General’s Office was investigating more than 3,600 alleged unlawful killings from 2002 through 2008, and had convicted more than 800 state agents in 210 rulings.
The vast majority of those convicted are low-level soldiers. Authorities have failed to prosecute senior army officers involved in the killings and instead have promoted many of them through the military ranks.
At time of writing, the Attorney General’s Office had summoned a total of 11 active or retired generals for questioning on their alleged role in false-positive cases. In August, retired Gen. Henry William Torres Escalante, was indicted; but no meaningful progress has been achieved in other cases against generals allegedly responsible for “false positive” killings. In March 2016, prosecutors summoned the former head of the army, retired Gen. Mario Montoya Uribe, for a hearing in which he was to be charged. The hearing had yet to take place as of November.
Gen. Rodríguez Barragan continued, at time of writing, to command the armed forces, despite strong evidence implicating him in false-positive killings.

The peace agreement creates a Special Jurisdiction for Peace to try those responsible for gross human rights violations committed during the conflict. Individuals responsible for crimes against humanity and serious war crimes who fully cooperate with the new jurisdiction and confess their crimes will be subjected to up to eight years of “effective restraints of rights and liberties.”
The November 12 agreement, while not fully addressing the flaws of the original, contains language that could make it much easier to fix at least two of the most important ones: an overly narrow conception of when superior officers can be held responsible for the crimes of their subordinates, and modest and vaguely defined definitions of the “restrictions on liberty” to be imposed on individuals who fully and promptly confess their war crimes.
Members of the armed forces would also benefit under the agreement, probably including many soldiers responsible for false-positive killings.

More than 6.8 million Colombians have been internally displaced since 1985, government figures reveal. Some 35,000 people were displaced in 2016, a significant drop from the more than 140,000 displaced in 2015.
The government’s implementation of land restitution under the Victims’ Law continues to move slowly. The law was enacted in 2011 to restore millions of hectares of abandoned land and land stolen by armed groups and civilians to internally displaced Colombians. As of September 2016, the courts had issued rulings in just 4,100 of more than 93,000 claims received.

Gender-based violence (GBV) is widespread in Colombia. Lack of training and poor implementation of treatment protocols impede timely access to medical services and create obstacles for women and girls seeking post-violence care. Perpetrators of GBV crimes are rarely brought to justice.
In July 2015, “femicide”—defined, in part, as the murder of a woman because of her gender—became a crime. The law established comprehensive measures to prevent and prosecute GBV, including recognizing a victim’s right to specialized legal assistance.

Rights advocates and journalists continue to be targeted with threats and attacks. Despite an Interior Ministry program that assigns protection to human rights defenders, trade unionists, and journalists, the United Nations high commissioner for human rights in Colombia documented the killings of 28 leading rights advocates and community activists from January through September 2016. During 2015, the Attorney General’s Office successfully prosecuted seven individuals for killing community activists and rights advocates.
The Foundation for a Free Press, a respected Colombian nongovernmental organization (NGO) that monitors press freedoms, reported threats against 91 journalists from January through October 2016.
The National Labor School, Colombia’s leading labor-rights NGO, reported 18 killings of trade unionists from January 2015 through February 2016—and the government has reported more than 120 since 2011. As of February 2015, the Attorney General’s Office had obtained convictions in only six of such killings committed since 2011.

In recent years, authorities in Colombia have taken several steps to recognize the rights of LGBT people. In June 2015, the Justice Ministry issued a decree allowing people to revise the gender noted on their identification documents without prior judicial approval. In November 2015, the Constitutional Court ruled that sexual orientation could not be used to prohibit someone from adopting a child, although a legislative proposal to hold a referendum on this issue remained pending at time of writing. In April 2016, the Constitutional Court upheld the right of same-sex couples to marry.
In October 2016, FARC leaders met with conservative politicians and agreed to promote a definition of the family as formed by a man and a women. The FARC backtracked after meeting with LGBT representatives days later. Conservative politicians and evangelist leaders had attacked the peace agreement claiming that it would “destroy families.”
Between January and June 2016, the Ombudsman’s Office received 89 reports of cases of violence against LGBTI people.

Indigenous peoples in Colombia suffer disproportionate limitations on their enjoyment of social and economic rights. From January through August 2016, at least 51 children—the vast majority of them belonging to Wayuu indigenous communities—died in the province of La Guajira of causes associated with malnutrition. Many of these deaths are caused by limited access to water. The Inter-American Commission of Human Rights had asked the government in December 2015 to take measures to curb these deaths.

The United States remains the most influential foreign actor in Colombia. In February, US President Barack Obama announced “Peace Colombia”—a new framework for bilateral collaboration to support peace efforts—and pledged US$450 million for the 2017 fiscal year.
A portion of US military aid is subject to human rights conditions, which the US Department of State has not enforced; in September, it again certified that Colombia was meeting the conditions. Through a special envoy to the FARC peace talks, Bernard Aronson, the US has strongly supported the peace agreements reached in September and November.
Cuba has also provided key support to the peace process by hosting the talks and acting as “guarantor” of the process.
In September, before the peace agreement was rejected in the national plebiscite, UN Secretary-General Ban Ki-moon participated in the ceremonial signing of the agreement, saying it “creates the conditions for lasting peace.”
The Office of the Prosecutor of the International Criminal Court (ICC) continues to monitor Colombian investigations of crimes that may fall within the ICC’s jurisdiction. In September, ICC Prosecutor Fatou Bensouda welcomed the announcement of the peace deal with the FARC but highlighted the importance of “genuine accountability” and “effective punishment” for those responsible for atrocities.
In January 2016, the UN Security Council, at the government’s request, established a political mission under a tripartite mechanism—the UN, the government, and FARC—to monitor and verify the peace agreement’s definitive bilateral ceasefire and cessation of hostilities, and the laying down of arms.
The Office of the UN High Commissioner for Human Rights continues to play a key role in defending and promoting human rights in Colombia. On October 31, the day the office’s mandate would have expired, the Colombian government agreed to extend it until 2019.
In October, President Santos was awarded the Nobel Peace Prize for his efforts to bring the Colombian armed conflict to an end.