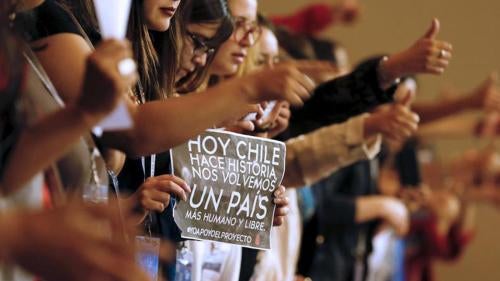 Courts continue to prosecute people for abuses committed during military rule in Chile, but the Supreme Court has used its discretionary powers in many cases to reduce sentences against human rights violators, resulting in punishments incommensurate with the gravity of the crimes. Poor prison conditions and reports of excessive use of force by police also continue to be significant human rights concerns in Chile.
The National Service for Minors became the center of a scandal in 2016 when information was released indicating that more than 850 children and 448 adults had died in state custody since 2005. Reported causes of death varied, but included infants and young children drowning in their own gastric or respiratory fluids, suicides, and delayed medical attention to injuries.
Chile’s parliament has debated reform of a counterterrorism law and decriminalization of abortion in limited circumstances, as promised by President Michelle Bachelet, but neither had passed at time of writing. In November, a bill was introduced to end the jurisdiction of military courts over alleged human rights abuses by Carabineros, Chilean police officers responsible for public order and crime prevention.

According to data released by the Ministry of the Interior’s human rights program in December 2015, justice authorities are investigating a total of 1,048 cases involving human rights violations committed during military rule (1973-1990). As of December 2015, 344 individuals had been sentenced for human rights crimes, including killings and enforced disappearances; 117 of them were serving prison sentences. While courts continue to prosecute abuses committed during military rule, the Supreme Court has used its discretionary powers in many cases to reduce the sentences imposed on perpetrators, sometimes even to a non-custodial sentence.
In July 2016, Juan Emilio Cheyre, former army commander-in-chief, was placed under judicial investigation for his alleged role as accomplice in the 1973 murders of 15 opponents of the Pinochet dictatorship. At the time, he was a lieutenant in the La Serena regiment, and the homicides were part of what became known as the “Caravan of Death,” a military death squad that tortured, extrajudicially killed, and disappeared suspected dissidents throughout Northern Chile. Gen. Sergio Víctor Arellano Stark, who led the Caravan of Death, died in March 2016 without serving prison time, though the Supreme Court convicted and sentenced him to six years.
In October, the Supreme Court overturned the 1974-1975 convictions for sedition and treason of 12 ex-members of the Chilean air force who refused to join the 1973 military coup.

A bill presented by the government in November 2014 to replace Chile’s counterterrorism law remained under discussion in the legislature at time of writing. The current law lacks sufficient due process protections, and its definition of terrorism is overly broad. The bill would update and narrow the definition of terrorism, excluding crimes against private property, which have formed the basis for terrorism prosecutions of Mapuche indigenous activists. It would also strengthen due process guarantees, giving defense attorneys the right to learn the identity of protected witnesses, question them about their evidence, and probe their credibility.

Military courts continue to exercise jurisdiction over abuses committed by Chile’s uniformed police, the Carabineros. Criminal proceedings in military courts lack the independence and due process guarantees of ordinary criminal cases. Investigations are secret, the proceedings are conducted mainly in writing, and lawyers have limited opportunities to cross-examine witnesses. Many legitimate complaints of human rights abuses filed in military courts are dismissed. Sentences are often inappropriately reduced by the military appeals court. Both the Constitutional Court and the Supreme Court have opposed military jurisdiction in such cases.
In May 2014, the minister of defense promised to present draft legislation before the end of June 2015 that would end military jurisdiction over crimes committed against civilians by the armed forces (including Carabineros). In November 2016, the government introduced such a bill.

In May 2016, President Bachelet filed criminal defamation charges against four journalists from the magazine Qué Pasa, after it printed the transcript of a telephone wiretap of a suspect in the Chilean Public Ministry’s investigation into a business with links to one of Bachelet’s relatives. In September, the ethical council of the Federation of Media of Chile (FMCS), a professional association, adopted a resolution sanctioning the magazine for breach of journalistic ethics. Bachelet subsequently withdrew her case, saying she was “satisfied” with the FMCS sanction and had never intended to “affect journalists or win money.”

Carabineros continue to use excessive force, according to media reports, particularly against protesters, students, and indigenous communities. Some officers have allegedly sexually harassed women and girls at protests.
A controversial law that allows what many are calling “preventive identity control” entered into force in July 2016. Article 12 of Law 20931 permits law enforcement to ask for identification from anyone who is older than 18 years of age without any suspicion of connection to a crime, which was the standard previously required to check identification. This is particularly concerning in the case of protests, as identification checks at protests in Chile have been reported as disproportionately affecting marginalized groups.

In November, President Bachelet signed into law a bill that will modify Chile’s criminal code to comply with international and regional standards on torture and cruel, inhuman, and degrading treatment including by increasing penalties for torture and prohibiting amnesty.
According to the Public Ministry, complaints of torture, genocide, ill-treatment, and crimes against humanity increased 193 percent in the first nine months of 2016, compared with the same period in 2015. Most cases allegedly involve public functionaries, such as Carabineros.

Despite measures adopted in 2010-2013 to reduce the prison population, many of Chile’s prisons remain grossly overcrowded. Prisons in Chile house nearly 49,000 detainees and prisoners, though their maximum capacity is less than 42,000. Conditions remain poor, and violent abuses by prison guards are common.

The National Service for Minors (Sename), the government agency tasked with caring for children and adolescents whose families are unable to do so, became the center of a scandal in July when an information request through Chile’s Transparency Law revealed that 185 children died in the care of state institutions from 2005 to May 2016; in October, Sename confirmed that the figure was even higher: 865 children and 448 adults (such as persons with disabilities or those in residences or outpatient programs)—a total of 1,313 deaths of people in its custody. As noted above, reported causes of death included infants and young children drowning in their own gastric or respiratory fluids, suicides, and delayed medical attention to injuries. The Chamber of Deputies questioned Minister of Justice Javiera Blanco in August, and a judicial investigation was ongoing at time of writing.

In March, Chile’s Chamber of Deputies approved a bill to decriminalize abortion in cases of rape, fetal inviability, and when a woman or girl’s life is at risk. The Senate Health Commission held public hearings in August. The bill, in particular the provision that decriminalizes abortion in rape cases, has been met with near-unanimous opposition from center-right and right-wing parties in Congress, as well as from the Catholic and Evangelical Churches. At time of writing, the bill was still pending in the Constitutional Commission of the Senate.

A “civil union” bill presented by former President Sebastián Piñera in 2011 that provides legal recognition and protection for same-sex couples became law in April 2015 and went into effect in October 2015.
In September 2016, the Senate Human Rights Commission approved a bill to recognize the gender identity of transgender people, with a Senate vote expected in December.
In June 2016 Chile, on behalf of four Latin American states and 42 co-sponsors, presented a resolution at the United Nations Human Rights Council creating the first UN expert post addressing violence and discrimination based on sexual orientation and gender identity.

On May 13, uniformed personnel of the National Human Rights Institute (INDH)—a government agency that promotes, monitors, and reports on human rights in Chile—reported being arbitrarily detained, beaten, and verbally assaulted by Carabineros when they tried to visit detained protestors at a police station in Antofagasta. Their professional association cited the incident as part of broader police attempts to undermine their function. In 2015, the Chamber of Deputies defeated, in a two-to-one vote, a motion to dismiss Lorena Fries, then director of INDH, for alleged negligence, after the INDH distributed educational materials critical of the Carabineros. The dismissal request and chamber vote showed the agency’s vulnerability to political reprisals.

The special rapporteur for freedom of expression of the Inter-American Commission on Human Rights, in preliminary observations from a 2016 visit to Chile, expressed concern that President Bachelet’s criminal charges against Qué Pasa, along with various bills under consideration in Congress, risked restricting the media, particularly from reporting on issues of public interest that involve political figures.
In June, the UN special rapporteur on freedom of assembly and association called Chile’s military jurisdiction system and the impunity it engenders “the most visible parts of the legacy of dictatorship,” criticized excessive use of force by police at protests, particularly against Mapuche demonstrators, and expressed opposition to the use of preventive identity controls at protests.
In April 2016, the UN Committee on the Rights of Persons with Disabilities urged the government to prohibit practices amounting to cruel, inhuman, or degrading treatment of people with disabilities in state and private institutions—such as psychosurgery, electroconvulsive therapy without consent, physical restraints, and isolation in cells—and to investigate reports of security forces mistreating people with disabilities.