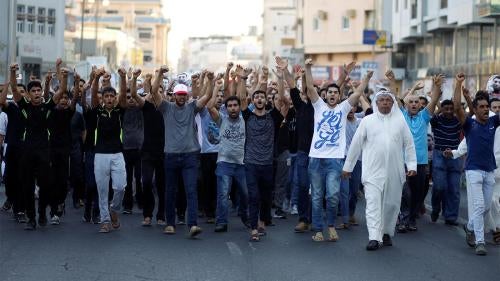 There was a marked deterioration in the human rights situation in Bahrain in mid-2016, when authorities dissolved the main political opposition group, al-Wifaq, jailed the country’s leading human rights activist, and harassed and prosecuted Shia clerics who peacefully protested the arbitrary revocation of the citizenship of al-Wifaq’s spiritual leader, Sheikh Isa Qasim. This orchestrated crackdown on the rights to free expression, assembly and association undermined prospects for a political solution to Bahrain’s domestic unrest.

Authorities made little progress in holding officials accountable for the mistreatment and torture of detainees, continued to arbitrarily strip citizenship from Bahrainis who have been critical of the government, and subjected civil society actors to arbitrary travel bans.

Freedoms of Expression, Assembly, and Association

Human rights activists Zainab al-Khawaja spent three months in jail after her detention in March 2016 based on four convictions that violated her right to free expression, one of which resulted from an unfair trial. Al-Khawaja left Bahrain for Denmark, where she also has citizenship, after authorities released her in June. She said Bahraini authorities were preparing to press further charges against her that could have resulted in a lengthy prison sentence.

In May, Bahrain’s High Court of Appeal more than doubled the prison sentence of al-Wifaq’s secretary-general, Sheikh Ali Salman, from four years to nine years. The appeal court overturned a trial court’s decision to acquit him of advocating the overthrow of the government by force. It increased the sentence despite strong evidence his initial trial was unfair and the fact that two of the charges on which he had been convicted clearly violated his right to freedom of expression.

In June, authorities detained prominent human rights activist Nabeel Rajab solely on charges that violate his right to free expression. He is facing 15 years in prison on charges that include criticism of Bahrain’s participation in Saudi Arabia-led military operations in Yemen, and “offending national institutions.” The latter charge is based on comments about alleged torture of inmates in Jaw Prison in March 2015. On September 5, authorities charged Rajab with “undermining the prestige of the state,” one day after the New York Times published an open letter he wrote from prison.

Also in June, the Ministry of Justice and Islamic Affairs requested that the judiciary dissolve al-Wifaq. The court issued an “expedited” ruling on June 14 ordering the group to close its headquarters and suspend activities, and confiscated its funds based on government allegations that the party was a cover for “acts associated with extremism and terrorism.” Authorities produced no evidence to support their allegations.

After authorities arbitrarily stripped al-Wifaq’s spiritual leader Sheikh Isa Qasim of his citizenship in June for allegedly inciting sectarianism, hundreds of people, including many Shia clerics, gathered in peaceful protest outside his home in the town of Diraz. Authorities responded with a campaign of harassment against Shia clerics, in violation of their right to free expression and peaceful assembly.

In August, a Bahraini court convicted Sheikh Ali Humaidan of “illegal gathering” and sentenced him to one year in prison for his involvement in the Diraz protests. One of the most high-profile Shia clerics charged with illegal gathering, Sheikh Maytham al-Salman, said that police insisted that he remove his clerical turban and robes, refused his request to shower and change his clothes, and kept him in interview rooms for 26 hours without sleep. He said he believed the insistence that he remove his religious attire was intended to “insult and intimidate a Shia cleric.” Credible Bahraini sources told Human Rights Watch that authorities questioned or brought charges against more than 50 Shia clerics in the aftermath of the Diraz protests.

In July, a prosecutor charged Nazeeha Saeed, a Bahraini correspondent for the French news agency Agence France Presse, with violating the country’s licensing law for journalists. Bahrain’s Information Affairs Authority sent a letter to one of Saeed’s employers citing “the unsatisfactory evaluation of her performance by our specialists” as the reason for not renewing the license.

The third annual report from the Office of the Ombudsman, released in June 2016, provided further evidence that authorities have made little progress in holding police and security forces accountable for the torture and mistreatment of detainees.

Since it was created in 2012, the Office of the Ombudsman has, according to its annual reports, referred 138 cases to the Special Investigations Unit, the body responsible for investigating and prosecuting security or other government officials allegedly involved in the torture or cruel, inhuman, or degrading treatment of detainees. Of these, the Special Investigations Unit has successfully prosecuted only one torture case, which the ombudsman’s second annual report characterized as “a vicious assault” on a detainee “in an attempt to force him to confess to drug dealing.”

The ombudsman’s 2016 report contained no information on the status of 15 complaints relating to the alleged torture of inmates by prison officials after unrest in Jaw Prison in March 2015. In May, M. Cherif Bassiouni, the lead author of the Bahrain Independent Commission of Inquiry report into the anti-government protests of 2011 and the disproportionate response of the security forces, urged “the pursuit of investigations of those responsible for the killing of five persons under torture and the ascertainment of their superiors’ responsibility.”

As a result of a 2014 amendment to Bahrain’s citizenship law, the Interior Ministry can, with cabinet approval, revoke the citizenship of any person who, according to authorities, “aids or is involved in the service of a hostile state” or who “causes harm to the interests of the Kingdom or acts in a way that contravenes his duty of loyalty to it.”

In 2016, information from media reports and credible local sources indicates that the Bahraini authorities stripped 133 individuals of their citizenship, bringing the total to 341 since the beginning of 2015. They can be classified into three broad categories: human rights defenders, political activists, and journalists; Bahrainis known to be fighting alongside the Islamic State (also known as ISIS); and individuals convicted of domestic terrorism offenses.

In June 2016, the Interior Ministry said it was revoking the citizenship of Sheikh Isa Qasim, considered the spiritual leader of the main opposition group, al-Wifaq. It accused him of “creating an extremist sectarian environment” and saying he had “encouraged sectarianism and violence.”

Right to Leave the Country

Authorities have placed arbitrary travel bans on tens of individuals who have been critical of the authorities’ human rights abuses. In September, an arbitrary travel ban prevented human rights activist Nedal al-Salman from attending a United Nations Human Rights Council meeting in Geneva, after earlier subjecting two of al-Salman’s colleagues from the Bahrain Centre for Human Rights to similar bans.

Law no. 19 of 2009 on the Promulgation of the Law of Family Rulings regulates matters of personal status in Bahrain’s Sunni courts. The law does not apply in the country’s Shia courts, with the result that Shia women, who comprise the majority in Bahrain, are not covered by a codified personal status law. Both Sunni and Shia women are discriminated against. For instance, men have a unilateral right divorce their wives; Sunni men can do so orally, and Shia men must do so in writing. Women must apply to the courts for a divorce.

Adultery is criminalized, as are sexual relations outside marriage, which is prosecuted under an article that criminalizes “an act of indecency with a female.” However, there is no law that prohibits discrimination on the grounds of sex, gender, sexual orientation, or gender identity.

Bahrain remained a member of the Saudi Arabia-led coalition that launched air strikes in Yemen throughout 2016, causing hundreds of civilian deaths, according to the UN.

The United States, which has a permanent naval base in Bahrain, criticized the dissolution of al-Wifaq and called on the government to drop charges and free Nabel Rajab. The United Kingdom, for whom the Bahrainis are building a permanent naval base, failed to call for the release of any imprisoned activists, or to criticize the dissolution of al-Wifaq.

In September, US government officials announced that the approval of the sale of F-16 fighter jets to Bahrain would be dependent on unspecified improvements in the human rights situation in the country.