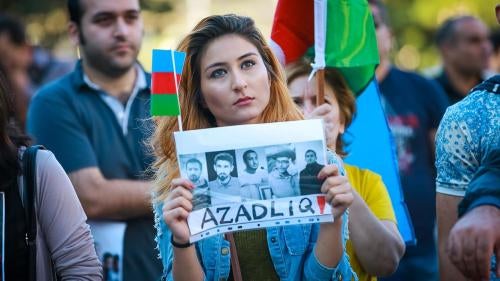 Reports of torture and other ill-treatment persisted throughout the year.

The September 2016 constitutional referendum abolished minimum age requirements for presidential and parliamentary candidates, extended from five to seven years the presidential term of office, and expanded the power of the presidency.

The Extractive Industries Transparency Initiative (EITI) declined to restore Azerbaijan’s full membership in the organization and gave the government four months to reform its laws limiting space for civil society or face suspension.

In March, President Ilham Aliyev pardoned 13 journalists, human rights defenders, activists, and bloggers who had been prosecuted on politically motivated charges in previous years. Their convictions have not been quashed, and some former detainees continued to face travel and work restrictions and risk detention if they resume their work. Some led NGOs, and these groups remained closed.

Ilgar Mammadov, leader of the pro-democracy opposition movement Republican Alternative (REAL), remained in prison despite the 2014 European Court of Human Rights decision on his case and repeated demands by the Council of Europe to release him. Others who remain behind bars include youth activist Ilkin Rustamzadeh, opposition Azerbaijan Popular Front Party (APFP) activist Murad Adilov, journalist Seymur Hazi, and blogger Abdul Adilov.

In August, in the lead-up to the constitutional referendum, the government arrested eight activists on a range of false, politically motivated charges, including drug possession, hooliganism, incitement, and illegal business activity. The authorities also accused some activists of possessing banned or potentially illegally imported materials related to Fethullah Gülen, the US-based imam who Turkey accuses of organizing the failed July 2016 coup attempt there.

Among those arrested were Fuad Ahmadli, a well-known social media activist and senior APFP member and Faig Amirov, financial director for the leading opposition newspaper Azadlig. During searches following their arrests, police claimed to have found prohibited religious books and compact discs related to Gülen, but also pressed other criminal charges against them. Both were in custody at time of writing.

Police also arrested three REAL members: Natig Jafarli, the party’s executive secretary, who had publicly criticized the constitutional referendum, and two other REAL activists campaigning against the referendum. A court jailed the latter two for a week for refusing to abide by a police order not to distribute campaign leaflets. In September, Jafarli was released pending trial.

Authorities continued to target leading and rank-and-file APFP activists, at least 12 of whom were either on trial or serving prison terms in 2016. Among those facing trial is Fuad Gahramanli, deputy APFP chairman, arrested in December 2015 on trumped-up charges of calling for the government’s overthrow. The charges are part of the criminal conspiracy and terrorism case against religious activists in Nardaran, a Baku suburb known for its Shi’ia conservatism. Gahramanli was in pretrial custody at time of writing. In March, a court convicted Mammad Ibrahim, advisor to APFP chairman Ali Kerimli, on spurious hooliganism charges and sentenced him to three years in prison. Elvin Abdullayev, a youth activist and APFP member remained in prison since his January 2015 arrest on dubious drug possession charges. In June 2016, the Supreme Court reduced his prison sentence from six to two-and-half years.

In April, authorities launched a criminal investigation into alleged tax evasion and related economic infractions supposedly involving 15 journalists who cooperate with Meydan TV, a Berlin-based online independent Azeri-language media outlet that provides critical reporting on human rights, corruption, and similar issues. They were at liberty pending the investigation; at least seven of them face travel bans while under investigation. In December 2015 and April 2016, courts convicted three family members of Meydan TV’s exiled journalists on trumped-up drug charges and paroled them in April 2016 after they had served less than a year.

In September, the state-run printing house refused to publish Azadlig due to the newspaper’s failure to make a debt payment to the company following the detention of Faig Amirli. As a result, Azadlig had to indefinitely suspend its print edition.

In July, authorities first suspended and then revoked the broadcasting license of a privately owned, staunchly pro-government ANS television, following its announcement to broadcast an interview with Fethullah Gülen. The TV channels remained closed at time of writing.

Highly restrictive and punitive regulations on NGOs adopted in 2014 and 2015 make it almost impossible for independent groups to fund and carry out their work. In February 2016, new regulations went into force giving the Justice Ministry broad powers to conduct intrusive inspections of NGOs on a wide range of grounds.

In April, the Prosecutor’s Office suspended the sweeping criminal investigation opened in 2014 against dozens of foreign donors and their grantees. Several organizations and their leaders that are members of Azerbaijan’s coalition for the Extractive Industries Transparency Initiative (EITI) saw restrictions linked to the investigation lifted. The authorities unfroze their bank accounts, lifted travel bans against them, and stopped intrusive screenings at the Azerbaijani borders.

Despite the unfrozen bank accounts, several groups in the EITI coalition cannot access funding because authorities refuse to register their grant agreements. Azerbaijani regulations require NGOs to provide banks with proof of grant registration in order to access grant funds.

The bank accounts of at least a dozen NGOs that worked on human rights and government accountability remain blocked; the groups suspended their work or operate in exile.

Torture and other ill-treatment continued with impunity. In August, police arrested Elgiz Gahraman, member of an opposition youth movement, and held him incommunicado for six days. Gahraman told his lawyer police beat and threatened him with sexual humiliation to force him to confess to false drug possession charges. Authorities failed to effectively investigate. Gahraman remained in custody at time of writing.

In May, police arrested youth activists Giyas Ibrahimov and Bayram Mammadov for spraying graffiti on a monument to former President Heydar Aliyev and demanded that they apologize on camera. When they refused, policemen beat and threatened to rape them with truncheons to force them to confess to drug possession. Authorities failed to conduct an effective investigation into the ill-treatment allegations. In October, Ibrahimov was sentenced to 10 years’ imprisonment; Mammadov’s trial was ongoing at time of writing.

In July, 18 of the 68 defendants in a high-profile trial counterterrorism case told a court that police had beaten them repeatedly to elicit confessions and testimony. The case concerns state allegations that Taleh Bagirzade, a religious activist who had previously been jailed on politically motivated charges, conspired with others to overthrow the government.

A November 2015 police raid to arrest Bagirzade in Nardaran, a Baku suburb, turned violent during unclear and disputed circumstances, with shootings leaving two police and seven civilians dead. Bagirzade stated at trial that state agents beat him to induce testimony against two political opposition leaders. Authorities denied the allegations and did not thoroughly investigate.

The United States, European Union, and Azerbaijan’s other bilateral and international partners welcomed the release of government critics but failed to effectively leverage the potential of their relationships with the government to press for meaningful rights improvements.

In October, EITI, a prominent international coalition that promotes good governance in oil, gas, and other extractive industries, declined to restore Azerbaijan’s full membership status in the organization, and gave the government four months to reform its restrictive NGO laws or face suspension.

Following its May 2016 visit, the United Nations Working Group on Arbitrary Detention noted receiving “a large number of testimonies […] about torture and ill treatment” in custody. It also observed “dire conditions of living and high level of negligence in the institution for women,” and expressed dismay “about the application of chemical restraints accompanied in the case of children with ‘light’ electroshocks” in one institution.

In its October concluding observations, the UN Human Rights Committee urged Azerbaijani authorities to end “the crackdown on public associations … ensuring that they can operate freely and without fear of retribution for their legitimate activities.”

In late 2015, Council of Europe Secretary General Thorbjørn Jagland launched an inquiry into Azerbaijan’s failure to carry out the European Court of Human Rights’ rulings. Jagland’s special representative could not visit Azerbaijan throughout 2016, apparently due to the lack of government cooperation to facilitate the initiative.

In December 2015, bipartisan legislation was introduced in the US House of Representatives, calling on the Azerbaijani government to free all “political prisoners.” The bill called for, among other things, visa bans on unnamed senior Azerbaijani officials responsible for the crackdown.

International financial institutions have continued or increased funding to the Azerbaijani government, including in the extractives industries, despite the worsening human rights situation.