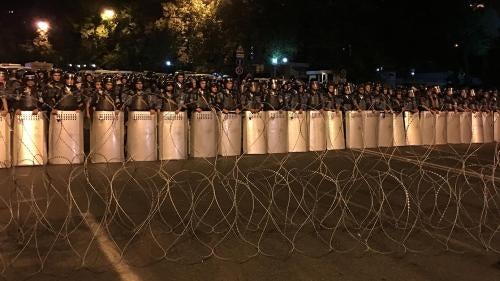 Other concerns include domestic violence, often perpetrated with impunity, violence, and discrimination based on sexual orientation and gender identity, and unnecessary restrictions on access to pain medications for people with life-limiting illnesses.

Excessive Use of Police Force

In July, Armenian authorities used excessive force against peaceful protesters demonstrating support for a radical group opposed to the government, and assaulted journalists reporting on the demonstrations. Authorities arbitrarily detained dozens of protest leaders and participants, pressing unjustified criminal charges against them and denying some of them basic rights of detainees.

Protests erupted after armed men from the radical opposition group, “Founding Parliament,” seized a police station in the capital Yerevan on July 17, killing one policeman and taking several hostages. Before the gunmen surrendered on July 31, public support for them and disaffection with the government grew into a protest movement. The protests were largely peaceful, with isolated incidents of violence from participants.

On July 29, police fired stun grenades into peaceful crowds in the neighborhood of the seized police station, causing demonstrators to sustain first and second degree burns and fragmentation wounds. Police did not attempt less violent crowd control means, and did not make any meaningful effort to warn crowds to disperse or about their plans to use force.

Police and unidentified people in civilian clothes acting with them, then charged towards the protesters, punching, kicking, and using wooden clubs and iron bars to beat some protesters, before detaining many of them.

Police warned several journalists to move away from the main crowd before using force. While most journalists complied, police fired several stun grenades in their direction, injuring at least eight. Police and unidentified men also beat some journalists and damaged and seized their equipment.

In July and August, authorities arbitrarily detained dozens of people linked to the protests, beating many of them, and pressing unjustified criminal charges against some.

Police held some detainees for up to 12 hours without documenting the detention, and on at least two occasions arbitrarily held groups of people in a gymnasium on an interior troop base. Authorities primarily relied on police testimony to press criminal charges against at least 40 people for allegedly “organizing mass disorder,” which carries a penalty of up to 10 years’ imprisonment. Courts relied on general and abstract reasons to send many of the detainees to pretrial detention. On appeal, courts released some protest leaders from detention on their own recognizance.

Authorities denied many detainees their basic rights, including prompt access to a lawyer of their choosing and the opportunity to inform a relative of their detention and whereabouts. Police also beat many detainees, in some cases severely, and did not allow some to get prompt medical care for their injuries. At time of writing, an investigation was pending into illegal detentions and beatings by police.

In a separate case, on January 1, police arrested opposition activist Gevorg Safaryan for allegedly assaulting a police officer, amid a scuffle during a public event organized by “Founding Parliament” members. Sarafyan denies he attacked the officer. A court approved Safaryan’s pretrial detention despite no evidence that he posed a flight risk or risk to the investigation. Local human rights groups consider his prosecution politically motivated. Safaryan’s trial was continuing at time of writing.

The gunmen involved in the July armed takeover of the Yerevan police compound demanded Sefilyan’s release and the president’s resignation, initially in exchange for release of hostages. After the men surrendered, authorities charged them with seizure of state buildings, hostage taking, and illegal arms possession. Authorities also arrested several other “Founding Parliament” members, including on suspicion of aiding and abetting the gunmen. Among them is a US citizen of Armenian descent, Garo Yegnukyan, who participated in peaceful protests following the seizure of the police station, and considers the charges politically motivated. Yegnukyan remained in pretrial detention at time of writing.

Despite evidence that violence against women remains common and sustained pressure from women’s rights groups and activists, Armenia has no law criminalizing domestic violence and has not ratified the Council of Europe’s Convention on Prevention and Combating Violence against Women and Domestic Violence. The Coalition to Stop Violence Against Women published a report documenting 30 cases of women killed by intimate partners and family members between 2010 and 2015. The report notes that domestic violence is grossly underreported and largely perpetrated with impunity. Coalition members receive more than 2,000 calls about domestic violence each year.

Following the October 2015 Rainbow forum, organized by Armenian LGBTI-friendly groups to discuss protection and promotion of minority rights, anonymous people targeted some participants with intimidation and threats, mostly on social media, including to burn and kill them. Authorities refused to launch a criminal investigation into the threats, citing lack of evidence.

The observation mission of the Council of Europe’s Parliamentary Assembly (PACE) called the December 2015 referendum to transform the government from a presidential to a parliamentary system “driven by political interests instead of the needs of the Armenian public.” PACE criticized inaccurate voter lists, allegations of vote buying, abuse of administrative resources, an imbalanced media field, and the effective exclusion of people with disabilities in the absence of mobile voting.

The Organization for Security and Co-operation in Europe’s representative on freedom of the media, Dunja Mijatović, called for an investigation into verbal and physical attacks on journalists at referendum polling stations.

In response to the July demonstrations, the European Union delegation, together with heads of mission of EU Member States in Armenia, called on the authorities to avoid using unnecessary force and for effective investigations into police actions, and urged demonstrators to protest peacefully. The United Nations in Armenia called for swift investigations and respect for peaceful assembly and free expression rights and criticized the use of force against journalists.

In a report to the Human Rights Council in March, Maud de Boer-Buquicchio, UN special rapporteur on the sale of children, child prostitution, and child pornography, acknowledged Armenia’s progress in combatting trafficking in persons, reducing placement of children in residential care, and limiting intercountry adoptions. However, she stated that the extent of child trafficking is unclear in the absence of relevant legislation and child-friendly complaint mechanisms, and insufficient awareness-raising among parents, professionals, and society. She urged authorities to pass domestic violence and other relevant legislation and ensure the child protection system consistently acts in the best interests of the child.