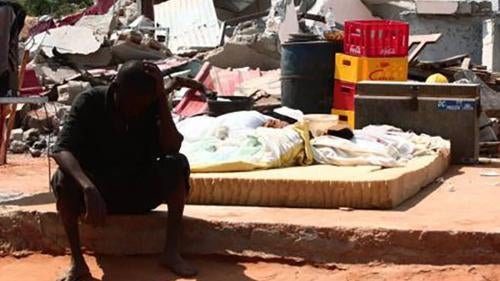 Human rights in Angola suffered during 2016 due to continued government repression and the country’s worst economic crisis since the civil war ended in 2002.

Sparked by the global drop in oil prices, the economic crisis slowed a decade of growth and exposed unresolved problems caused by years of corruption, mismanaged public funds, and political control of institutions. Calls to diversify the economy to create new revenue sources led to massive land acquisition by the government and private businesses, often with forced evictions and other violations, including in the capital, Luanda.

President José Eduardo dos Santos, in power since 1979, has announced that he will step down in 2018. Security forces continued to crack down on pro-democracy activists and those protesting on behalf of human rights.

Coverage in state-run media remained highly biased in favor of the government and the ruling party, the Popular Movement for the Liberation of Angola (MPLA). The government continued to restrict freedom of expression with censorship in state-run media and some private media controlled by ruling party officials, which remained the only outlets with countrywide coverage.

In 2016, state television channel TPA at times invited opposition and civil society groups to debates but those discussions mostly maintained a pro-government slant. Social media, blogs, and privately owned news websites continued to operate without interference as the main channels for independent news and debates.

In November, without public consultation, the parliament passed a new media law that gives regulatory control of all media to a new body that is controlled by the state and ruling party. The Angolan union of journalists called the law “a political tool to intimidate the press,” and vowed to take the matter to the constitutional court.

Article 47 of Angola’s Constitution permits citizens to protest without pre-authorization, provided they inform authorities in advance. However, the government consistently blocked peaceful anti-government protests with intimidation and detention, and when peaceful protests did take place, they frequently encountered excessive force and arbitrary arrests.

In March 2016, after a lengthy trial, a Luanda court sentenced 17 members of a book club to between two and eight years in prison for discussing peaceful protest and democracy at a meeting in June 2015, inspired by Gene Sharp’s book, From Dictatorship to Democracy.

In June, in an unprecedented move, the governor of Benguela province gave permission for a group of anti-government activists called the Revolutionary Movement to protest against the arrests. Later that month, after international condemnation, the Supreme Court provisionally released the 17 people pending a final decision on their appeal. In September, they were pardoned following the approval of an amnesty law.

In May, the Supreme Court overturned the conviction of human rights defender Marcos Mavungo, who had been sentenced to six years in prison in September 2015 in relation to a planned peaceful demonstration on corruption, human rights abuses, and poor governance in oil-rich Cabinda province.

Prison conditions remained poor, with local activists and media highlighting corruption, overcrowding, and violence. In April, the Angolan government announced that it would open four new jails by the end of the year to help accommodate the estimated 24,000 inmates distributed among 40 prisons across the country. In July, parliament approved a new amnesty law that granted freedom to thousands of inmates with prison sentences of up to 12 years for nonviolent crimes.

Security forces continued to use excessive force with impunity as the government failed to investigate and prosecute officers who committed serious human rights violations.

Authorities refused requests from local human rights groups, opposition members of parliament and the United Nations High Commissioner for Human Rights to establish an independent commission to investigate the events of April 2015, when a police operation against a religious sect left at least 22 people dead in Huambo.

In April 2016, Julino Kalupeteka, the leader of the sect, and nine of his followers were sentenced to up to 28 years in prison for the killing of nine police officers during the raid on their makeshift camp. However, to date, no security force members have been arrested or prosecuted for the killing of the sect members.

In April, police gunfire wounded at least three people during a student demonstration against an increase in school fees in Caluquembe, Huila province. Police initially denied firing live ammunition but later admitted that one officer had opened fire and said he would be punished. It is not known what steps were taken to punish him, or others.

On August 6, soldiers fired live ammunition during a peaceful protest against forced evictions in Luanda, killing a teenage boy (see below). The government announced an investigation into the case but had not published any findings at time of writing.

Angola’s healthcare system, already under stress due to falling oil prices, struggled to respond to parallel outbreaks of malaria and yellow fever.

Angola has one of the highest child mortality rates in the world. According to the Children’s Rights and Emergency Relief Organization (UNICEF), one in five children in Angola does not survive to age 5. Almost 3,000 people died from malaria, predominantly children, in the first quarter of the year—a much higher number than in previous years—because among other reasons, the healthcare system ran out of basic malaria medicines.

The healthcare system also ran out of yellow fever vaccines, essential for protecting children against this potentially deadly disease. Both basic malaria medicines and yellow fever vaccines are on the World Health Organization (WHO) Model List of Essential Medicines. Governments are therefore required to ensure their adequate availability even in times of economic crisis. Shortages of other essential medicines and medical supplies were also reported, including syringes and gloves, due to health budget cuts.

Forced evictions persisted during the year with a host of associated human rights violations. In Luanda, a special force tasked with protecting government infrastructure and land forcibly evicted over 1,000 people in Zango area on the outskirts of the city, destroying their homes and property.

In July, armed soldiers with bulldozers and trucks arrived without warning or a court order and demolished homes. In August, security forces responded to a residents’ protest by shooting in the air and at their feet, killing a 14-year-old boy. After growing complaints of abuses by soldiers against Zango residents, authorities ordered the operation to be stopped in late September. However, at time of writing, the forcibly evicted residents had not been relocated or compensated.

Angola continued to play an important role in the region, most notably in conflicts in Africa’s Great Lakes region. As president of the International Conference on the Region of the Great Lakes (ICGLR), Angola organized in October an international conference to discuss the situation in the Democratic Republic of Congo.

Following an invitation by the government, the United Nations special rapporteur on the human rights of migrants visited Angola in May. The UN official urged Angola to ratify the Optional Protocol to the Convention against Torture (OPCAT) and to establish a National Preventive Mechanism to undertake regular unannounced visits to all places of detention, including migrant detention centers. He also renewed calls for Angola to establish an independent national human rights institution.

In October, a delegation of the African Commission on Human and Peoples’ Rights, led by the chairperson and special rapporteur on freedom of expression and access to information, visited Angola at the invitation of the government.

Angola’s mandate as non-permanent member of the UN Security Council ended in 2016. Despite the economic crisis, Angola has thus far remained donor independent thanks to years of strong trade links with China. The health crisis has, however, forced the government to request help from the United States, with which it already had strong bilateral relations. Throughout 2016, the US provided assistance to prevent major infectious diseases and strengthen Angola’s health system. The European Union also provided funding and support to develop higher education, agriculture, and sanitation.

In June, Angola endorsed the Safe Schools Declaration, thereby committing to implement and use the Guidelines for Protecting Schools and Universities from Military Use during Armed Conflict.