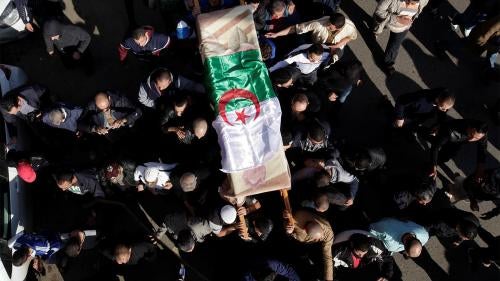 Algerian authorities increasingly resorted to criminal prosecutions in 2016 against bloggers, journalists, and media figures for peaceful speech, using articles in the penal code criminalizing “offending the president,” “insulting state officials” or “denigrating Islam.” They have also prosecuted labor activists who organized or called for peaceful demonstrations on charges such as “unauthorized gathering.”

Parliament adopted amendments to the constitution in February 2016 that include recognition of academic freedom and press freedom without prior censorship and without prison as a punishment for press offenses. However, the constitution conditions the exercise of these and other rights to national laws that restrict them significantly.

Algeria’s 2016 constitution states that “the right to peaceful assembly is guaranteed within the framework of the law, which sets forth how it is to be exercised” (article 49).

In practice, relying on a range of laws, Algerian authorities routinely violate the right to freedom of assembly. The penal code punishes organizing or participating in an unauthorized demonstration in a public place with up to one year in prison (article 98). Authorities in Algiers, the capital, banned public demonstrations indefinitely in 2001, when the country was under a state of emergency. Authorities did not rescind the ban when they lifted the state of emergency in 2011.

The ban on demonstrations in Algiers is strictly enforced by authorities, who mobilize large numbers of police to thwart demonstrations and detain participants, usually holding them for a few hours before releasing them. Police arrested 20 members of the National Coordination of Contractual Teachers who called for a demonstration in Algiers on March 21 and 22, and held them in detention in police stations for several hours, then released them without charge.

Police arrested relatives of the forcibly disappeared during the violence of the 90s and several human rights activists as they demonstrated on August 30, the International Day of the Disappeared, in front of the National Consultative Commission for the Promotion and Protection of Human Rights in Algiers. They held them for several hours before releasing them without charge.

Authorities have also restricted the right to assemble even in private spaces indoors. On February 6, 2016, the National Union of Public Administration Staff (SNAPAP), an independent labor union, organized a symposium on the socio-economic situation in Algeria at the House of the Unions, a private space rented by the SNAPAP. Police encircled the place, prevented people from accessing it, and arrested six union leaders for several hours, then released them without charge.

Freedom of Association and Unions

In 2012, the government enacted Law 12-06, which requires all associations—including those that had already successfully registered—to re-file registration applications and obtain a registration receipt from the Interior Ministry before they can operate legally, in a cumbersome procedure akin to a new registration.

To date, major human rights organization such as the Algerian League for Human Rights (Ligue Algérienne des Droits de l’Homme, LADDH) and Youth Action Rally (Rassemblement Action Jeunesse, RAJ,) and the Algerian division of Amnesty International, which submitted compliance applications in January 2014 as provided for by Law 12-06, have still not obtained a receipt certifying their legal existence. The absence of a receipt weakens them by making it impossible to open a bank account or rent an office in their own name, or hire a public hall for a meeting. Moreover, members of an association that is “non-accredited, suspended, or dissolved” risk prison sentences of up to six months for conducting activities in its name.

Until the 1990s, Algeria had only one lawful workers’ union, the General Union of Algerian Workers (Union Générale des travailleurs algériens, UGTA). On June 2, 1990, Algeria adopted Law 90-14, allowing for the establishment of independent unions. Several autonomous unions were created in the public sector.

In practice, authorities have curtailed the work of independent unions in various ways. They withheld legal status from independent unions that applied for it, hindering their ability to collect the membership fees they would need to rent an office and organize events. Without legal status, they cannot open a bank account or file cases in court. Several union activists faced retaliation for organizing or participating in strikes. They were suspended from their positions without compensation and never rehired. In 2016, the International Labor Organization recommended that Algerian authorities end the practice of preventing the registration of autonomous unions and reinstate all workers suspended or dismissed because of their trade union activities.

Since the 1990s, Algeria has seen a proliferation of privately owned newspapers that enjoy a certain margin of freedom to criticize public figures and state policies. The 2014 Law on audio-visual activities ended the formal state monopoly on audiovisual media. However, repressive press laws, dependence on revenues from public-sector advertising, and other factors limit press freedom. The “information code” adopted in 2012, contains several articles that constrain freedom of expression. Article 2 states that news journalism is to be “a freely practiced activity,” as long as it respects “national identity, the cultural values of society, national sovereignty and national unity, as well as the requirements of national security, national defense, public order, and the country’s economic interests, among others.”

In 2016, authorities prosecuted a number of Algerians for critical speech. On September 6, an appeals court gave Slimane Bouhafs, a converted Christian, a three-year prison sentence for Facebook posts “offending the prophet” and “denigrating the dogma or precepts of Islam,” under article 144bis of the penal code.

On August 9, an Algiers appeals court upheld a two-year prison sentence for Mohamed Tamalt, a freelance journalist with dual Algerian and British nationality, for a video he posted on Facebook featuring a poem deemed offensive to Algeria’s president.

On May 25, the Laghouat first instance court sentenced Belkacem Khencha, a labor rights defender, to six months in prison for posting a video on Facebook criticizing the judiciary for sentences imposed on other rights activists. He remained free pending an appeal scheduled for September 29.

The two executives were accused of making false statements under article 223 of the penal code and complicity in the abuse of office under articles 33 and 42 of a 2001 anti-corruption law. They spent three weeks in prison before being sentenced, on July 18, to a suspended prison term of six months, and a fine of 50,000 dinars (US$457). At time of writing, the show had not resumed and production materials remained confiscated.

Algeria’s Constitution enshrines the principle of non-discrimination based on sex and requires the state to take positive action to ensure equality of rights and duties of all citizens, men and women. In February 2016, parliament introduced an article proclaiming that the “state works to attain parity between women and men in the job market,” and “encourages the promotion of women to positions of responsibility in public institutions and in businesses.”

On December 10, 2015, parliament adopted amendments to the penal code specifically criminalizing some forms of domestic violence. Assault against one’s spouse or former spouse can be punished by up to 20 years in prison, depending on the victim’s injuries, and the perpetrator can face a life sentence for attacks resulting in death. The amendments also criminalize sexual harassment in public places.

Despite adoption of the law, Algeria has yet to adopt the more comprehensive legal measures, such as protection orders to protect women from violence and concrete duties on law enforcement to respond to domestic violence, needed to prevent domestic violence, assist survivors, and prosecute offenders. The law, moreover, makes women vulnerable to threats from the offender or relatives, by including a provision that a pardon by the victim puts an end to prosecution.

Algeria’s Family Code continues to discriminate against women despite some amendments in 2005 that improved women’s access to divorce and child custody. An adult woman still requires a male guardian to conclude her marriage contract, a requirement not imposed on men. A man can divorce unilaterally, while a woman must apply to the courts. If a woman wishes to divorce without her husband’s consent and without justification, she needs to pay back her dowry, or an equivalent amount of money, to her husband in return for the divorce. This is particularly problematic as the code does not recognize marital property, provisions that values women’s non-monetary contributions to the marriage at the time of termination.

Perpetrators of human rights crimes and abuses during the internal armed conflict of the 1990s continued to enjoy impunity under the Charter on Peace and National Reconciliation. The charter criminalizes comments deemed to denigrate the security forces or state institutions for their conduct during the armed conflict, when both state forces and extremist Islamist groups committed torture, enforced disappearances, unlawful killings, and other serious abuses.

Algeria’s penal code criminalizes same sex relations with a prison sentence of two months to two years. In 2015, several people were arrested for same-sex relations but none were prosecuted.

Algeria allows the Polisario Front, the liberation movement for the Western Sahara, to administer refugee camps housing some 100,000 Sahrawi refugees in the southern desert near the border with Western Sahara. During his first visit to the refugee camps as UN Secretary-General, Ban Ki-moon in March called it an “unacceptable situation” and angered Moroccan authorities by referring to the Western Sahara as “occupied” by Morocco.

In at least three cases during 2016, Sahrawi families prevented their adult daughters from exercising their right to freedom of movement by departing for Spain, where they had lived and established legal residency. The Polisario was unwilling or incapable of ending these situations of illegal confinement of women, a form of domestic violence. Algeria, despite its ultimate responsibility for protecting the human rights of all persons present on its territory, did not intervene to end their confinement.

Algeria continued to deny international human rights organizations entry to conduct research missions. It also did not reply to requests, pending since 1997 and 2011, respectively, for visits by the UN special rapporteurs on torture and on freedom of peaceful assembly and of association.