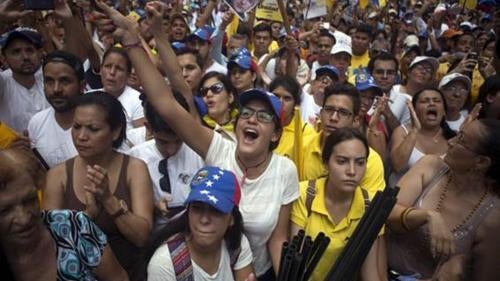 Under the leadership of President Hugo Chávez and now President Nicolás Maduro, the accumulation of power in the executive branch and erosion of human rights guarantees have enabled the government to intimidate, censor, and prosecute its critics, leading to increasing levels of self-censorship.

Leading opposition politicians were arbitrarily arrested, prosecuted, convicted, and barred from running for office in legislative elections scheduled to be held in December 2015. The government prosecuted dozens of lesser-known opponents for criticizing the government.

Other concerns include lack of access to basic medicines and supplies—the result of problematic government policies—and continuous harassment of human rights defenders by government officials.

In early 2014, the government responded to massive anti-government protests with brutal force. For several weeks, security forces routinely used unlawful force against unarmed protesters and bystanders. They also tolerated and sometimes collaborated directly with armed pro-government gangs that attacked protesters with impunity. Detainees were often held incommunicado on military bases for 48 hours or more before being presented to a judge, and in some cases suffered a range of abuses during detention that included severe beatings; electric shocks or burns; and being forced to squat or kneel without moving for hours.

The Attorney General’s Office reported that it had opened 189 investigations into alleged security force abuses committed during the protests and that 42 law enforcement officials had been charged with improper use of force and firearms and ill-treatment of citizens. It did not give information on convictions.

Protesters continue to be subject to criminal prosecution for participating in peaceful demonstrations. In January, National Guardsmen detained Raúl Virgilio Quintero García, a university student, for taking a picture of people waiting in line to purchase goods at a supermarket in Caracas. Six demonstrators who had been peacefully protesting against the long lines, and a cameraman filming them, were also detained. Quintero was charged with several crimes and released, but remains subject to criminal prosecution.

Starting in July 2015, President Maduro deployed more than 80,000 members of security forces nationwide in “Operation Peoples’ Liberation” to address rising security concerns, as well as illegal sales of scarce products. During these operations, security forces violated fundamental rights through arbitrary detentions, illegal home searches, and verbal and physical abuse. The government reported dozens of killings during the operations; in several cases, there have been credible allegations that some victims were extrajudicially executed.

In August, the president declared a state of emergency in six municipalities in Táchira State near the Colombian border. Between August and late September, Venezuelan security forces deported more than 1,700 Colombians. At least 22,000 more left Venezuela fearing abuses or deportation. Hundreds of Colombians claim to have suffered forceful eviction from their homes, which were subsequently destroyed; verbal and physical abuse by Venezuelan security forces; and forceful separation of families. Some deported Colombians had legal permits to live in Venezuela but were not allowed to challenge their deportations.

Since former President Chávez and his supporters in the National Assembly conducted a political takeover of the Supreme Court in 2004, the judiciary has ceased to function as an independent branch of government. Members of the Supreme Court have openly rejected the principle of separation of powers, publicly pledged their commitment to advancing the government’s political agenda, and repeatedly ruled in favor of the government, validating its growing disregard for human rights.

Judge María Lourdes Afiuni remains under criminal prosecution as a result of a 2009 ruling in which she authorized the conditional release of a government critic. Although Afiuni’s ruling complied with a recommendation by international human rights monitors and was consistent with Venezuelan law, a provisional judge who had publicly pledged his loyalty to Chávez ordered her to stand trial on charges of corruption, abuse of authority, and “favoring the evasion of justice.” After a year in prison and two under house arrest, she was released but remains subject to criminal prosecution.

In September, a judge convicted Leopoldo López, an opposition leader, and sentenced him to more than 13 years in prison for crimes that include “public incitement” to commit crimes during a demonstration in Caracas in February 2014. Three students whose cases were linked to López’s were also sentenced, two to four-and-a-half years, and one to more than 10. The judge ruled all three could serve their sentences in conditional liberty.

During Lopez’s trial, the prosecution failed to provide credible evidence linking him to a crime, and the presiding judge, who is a provisional judge and lacks security of tenure, had not allowed his lawyers to present evidence in his defense. In October, one of the prosecutors fled Venezuela and claimed the case had been a “farce.”

Lawyers have been prosecuted for providing legitimate legal assistance to clients. Marcelo Crovato was detained in April 2014 while advising a neighbor whose home was being illegally searched during the protests. He was charged with crimes that included “instigation to disobey the law” and belonging to an “association to commit crimes.” Even though prosecutors did not provide any credible evidence against him, Crovato spent nearly 10 months in prison until February, when he was granted house arrest for medical reasons. At time of writing, Crovato remained subject to criminal prosecution.

Over the past decade, the government has expanded and abused its powers to regulate media and has taken aggressive steps to reduce the availability of media outlets that engage in critical programming. While criticism of the government is articulated in some newspapers and on some websites and radio stations, fear of government reprisals has made self-censorship a serious problem.

In 2010, the National Assembly amended the telecommunications law to grant the government power to suspend or revoke concessions to private outlets if it is “convenient for the interests of the nation.” It also expanded the scope of a restrictive broadcasting statute to cover the Internet, allowing the arbitrary suspension of websites for the vaguely defined offense of “incitement.” Previous amendments to the criminal code had expanded the scope and severity of defamation laws that criminalize “disrespect” of high government officials.

In April, Diosdado Cabello, the pro-government National Assembly president, filed civil and criminal charges of aggravated defamation against 22 “shareholders, editors, editorial boards, and owners” of the Venezuelan newspapers Tal Cual and El Nacional and the news website La Patilla for reproducing an article by the Spanish newspaper ABC. The article included statements allegedly made by Cabello’s former bodyguard, who the reports said was collaborating with United States authorities to investigate whether Cabello had links to a drug cartel.

Venezuela’s government has sought to marginalize the country’s human rights defenders through repeated unsubstantiated allegations that they are seeking to undermine Venezuelan democracy. During his weekly show on state-run television in 2015, Cabello repeatedly characterized human rights groups’ participation in hearings before the Inter-American Commission on Human Rights (IACHR) or United Nations human rights monitoring bodies as attempts “to destabilize the government.”

In October, three unidentified individuals kidnapped for several hours and robbed Marino Alvarado, a well-known human rights defender who works at the Venezuelan nongovernmental organization Provea. Before the incident, Alvarado had requested the intervention of the IACHR, fearing for his life and physical integrity after Cabello and President Maduro openly questioned Alvarado’s and Provea’s activities and sources of funding. The IACHR ordered the government two weeks later to protect Alvarado and other Provea staff.

Corruption, weak security, deteriorating infrastructure, overcrowding, insufficient staffing, and poorly trained guards allow armed gangs to effectively control the prisons in which they are incarcerated. The Venezuelan Observatory of Prisons, a human rights group, reports that 6,472 people died and 16,387 were injured in prisons between 1999 and 2014. As of July, 63 percent of the more than 50,000 people in prison were in pretrial detention, and more than 100 people had died in prison, according to the Observatory.

In March, a network of medical residents working in public hospitals throughout the country reported that 44 percent of the nation’s operating rooms were not functional and 94 percent of labs did not have the materials they needed to operate properly. They also found that 60 percent of medicines or supplies routinely stocked in hospitals elsewhere were entirely or partially unavailable in Venezuelan ones, and that essential medicines were not available in pharmacies.

Labor legislation adopted in April 2012 includes provisions that limit the freedom of unions to draft their statutes and elect their representatives. In practice, the National Electoral Council (CNE), a public authority, continues to play a role in union elections, violating international standards that require that these elections be held without government interference.

The UN high commissioner for human rights and several UN rapporteurs have expressed concern regarding the deteriorating human rights conditions in Venezuela, including the government’s harsh responses to criticism and peaceful expressions of dissent, intimidation campaigns against human rights defenders, and mistreatment and torture of detainees.

The UN Human Rights Committee and the UN Committee on Economic, Social, and Cultural Rights expressed serious concerns regarding a range of violations, including the process to appoint and remove judges, which undermines judicial independence; limited access to information held by the government; the critical situation of Venezuela’s health care system; and violence and intimidation against union leaders.

In July the Inter-American Court of Human Rights (IACrtHR) ruled that Venezuela had violated free expression rights when it arbitrarily took off air the critical TV station RCTV in 2007, and ordered the government to reinstate the channel.

Due to the government’s decision to withdraw from the American Convention on Human Rights, Venezuelan citizens and residents are unable to request the intervention of the IACrtHR when local remedies are ineffective or unavailable for abuses committed since September 2013. The IACHR has continued to monitor the situation in Venezuela, applying the American Declaration of Rights and Duties of Man, which does not require states’ ratification.

Regional bodies such as the Union of South American Nations (UNASUR) and the Common Market of the South (MERCOSUR) have failed to call on Venezuela to address abuses. Although some Latin American governments—including Chile, Colombia, Costa Rica, and Paraguay—publicly commented on López’s conviction, most regional leaders have remained silent regarding the human rights situation in Venezuela.

In November, Organization of American States Secretary General Luis Almagro broke the silence by publishing a letter criticizing the jailing of López and other Maduro administration abuses of power. Days later, Argentine President-Elect Mauricio Macri stated that once in office he would request that Venezuela be suspended from MERCOSUR pursuant to a provision in the regional body’s founding treaty that allows state parties to suspend others when there is a “breach” in their “democratic order.”

In December 2014, the US adopted legislation that allows it to freeze assets and ban visas for those accused of committing abuses against anti-government demonstrators during the 2014 protests. In March, President Barack Obama issued an executive order imposing targeted sanctions against seven Venezuelan government officials.

Venezuela is currently serving on the UN Security Council where it is the chair of the sanctions committees for Sudan, Somalia, and Eritrea. As a member of the UN Human Rights Council, Venezuela regularly voted to prevent scrutiny of serious human rights situations around the world, voting against resolutions spotlighting abuses in North Korea, Syria, Iran, Belarus, and Ukraine. Venezuela’s October 2015 campaign for a second term on the Human Rights Council was successful.

In November 2015, President Maduro addressed the Human Rights Council at a special meeting convened at his request. In a taped statement, the UN high commissioner for human rights noted that he shared concerns expressed by the UN Human Rights Committee about intimidation, threats, and attacks against journalists, human rights defenders, and lawyers in Venezuela. Despite repeated requests, Venezuela has not allowed any UN special procedures to visit the country since 1996.